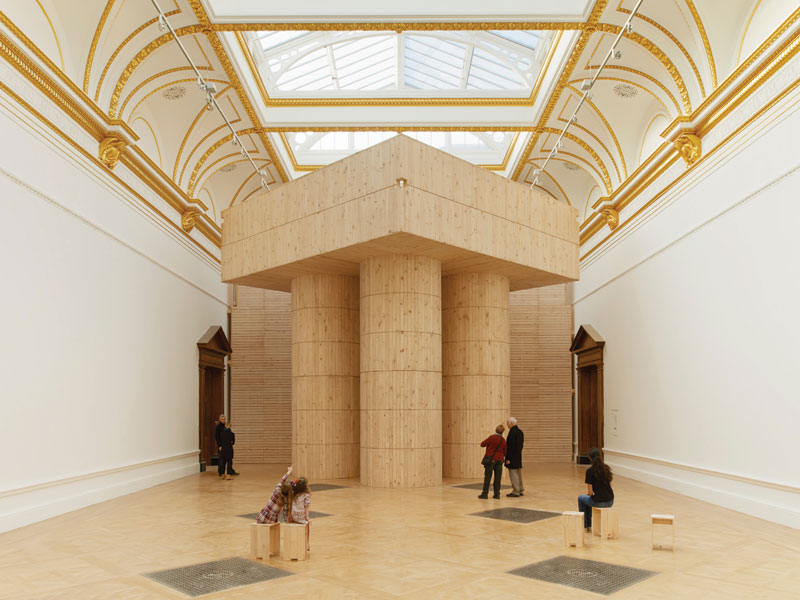 We get to know Pezo von Ellrichshausen, a Chilean art and architecture studio that creates experiential 'spatial structures', most recently at this year’s Venice Architecture Biennale

Who - Mauricio Pezo and Sofia von Ellrichshausen, plus four staff
What - Architecture
Where - Concepción, Chile
When - Founded 2002

Architects Mauricio Pezo and Sofia von Ellrichshausen met by chance in Buenos Aires. After the second day walking around the city, they decided to live and work together and form an art and architecture studio in Chile. Almost 15 years later they have built up a portfolio of ‘spatial structures’ that put the human experience at the centre. ‘In many ways, we have been blurring the disciplinary boundaries between art and architecture,’ says von Ellrichshausen. ‘We believe that those labels are not relevant for the definition of the intentions, the formats or the qualities of the finished work.’ Rather than ‘artistic architecture’ they like to describe their work as ‘architectonic art’.

Most recently the practice created Vara, a labyrinthine installation at the heart of the Giardini at this year’s Venice Architecture Biennale. Comprising dark-grey, interlinked circles, the curious, open-air structure transports visitors away from the flurry of activity on the main exhibition routes into a quiet, contemplative space that engages with the senses and plays with notions of interior and exterior. Pezo and von Ellrichshausen describe it as having two dimensions, a conceptual and a sensual one - the conceptual one is the reference to Vara: an ancient, inaccurate and now obsolete unit of measurement. Says Pezo: ‘Our work always operates in that double dimension; in the immediacy of our perception, of our bodily relationship with a place, while stimulating a mental image, an intellectual construction, for a potential understanding of that experience.’

Pezo von Ellrichshausen similarly presented a vast, complex model of overlapping circles - a research project ‘on the capacity of architectonic intentions to be diluted by means of repetition’ created with students in the Czech Republic in November, while the 12m-tall Cent Pavilion stacked a series of hexagonal shapes at the Chicago Architecture Biennial last year. Made in collaboration with the Illinois Institute of Technology, it was designed to convey ‘silent and convoluted simplicity’, a recurring motif in the practice’s work.

Brits might recognise the name of the practice from the Sensing Spaces exhibition at London’s Royal Academy in 2014. Focusing on the experiential qualities of architecture, Pezo von Ellrichshausen was one of seven practices tasked with reawakening visitors’ eyes and ears to the spaces around them. Its wooden structure lifted visitors up to the eaves of the RA to gain a new viewpoint of the gallery space.

Other work has focused on minimal, one-off homes in remote rural settings, including its own house and studio, Cien House, a seven-storey concrete tower in Concepción (2011) and Poli House (2008), a boxy, concrete summer house and cultural centre punched with deep-recessed windows, perched on the cliffs of the Coliumo peninsula. Guna House (2014) is formed of a monolithic prism of concrete on a steeply sloping hillside in Concepción, while Meri House (2014) features a regular sequence of identical connected rooms. Current work includes a wooden house on a remote island in southern Chile, a pavilion for an (undisclosed) museum in Paris and, back in Concepción, both an innovation centre for Universidad del Bio-Bio and a small museum for the Meissner-Prim Foundation.

But Pezo von Ellrichshausen has no immediate plans for expansion or hunger for larger projects, describing its ideas focused studio as ‘more like a family than a supply chain’. Says Pezo: ‘We never work on more than two [projects] at a time. Fortunately, making architecture is fairly slow.’

For von Ellrichshausen, she would be happy ‘doing a few special projects and spending most of our time reading, writing, drawing, painting and sculpting’. For Pezo, the long-term aim is to try to continue following the advice given by the Argentinian poet Godofredo Iommi, ‘to always do the same thing but never in the same way’.