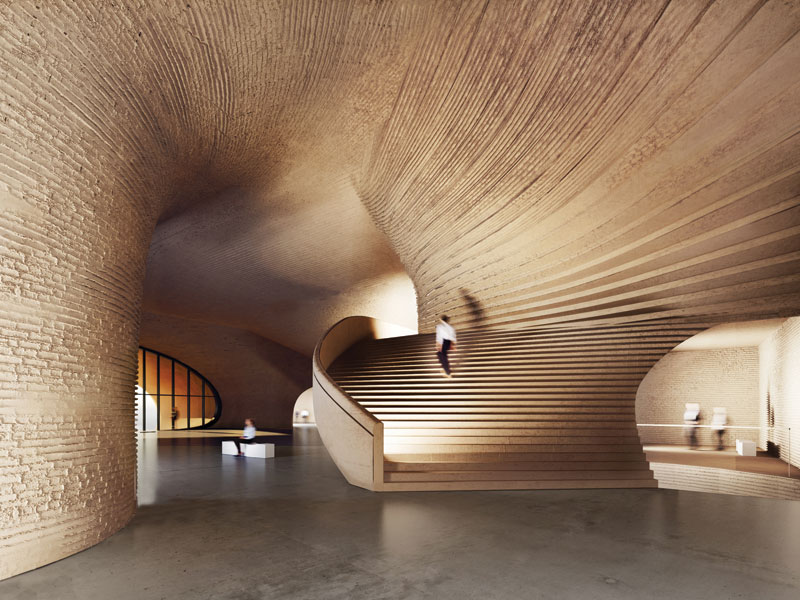 Who: Next Office
What: Architecture practice
Where: Tehran, Iran

On winning in July the inaugural Royal Academy Dorfman Award that honours international talent representing the future of architecture, Alireza Taghaboni explained he wanted his architecture ‘to have a productive purpose in a country where the context is political’. At the height of another round of brutal trade sanctions imposed on Iran by the USA, likely to have a devastating effect on everyday life in Taghaboni’s home city of Tehran and across the country, this context is a pressing concern. ‘It’s unclear what the next steps are in Iran in terms of the economy and politics,’ he says when we speak. ‘Several of my colleagues want to emigrate to other countries and the currency is going down.’

Nonetheless, Taghaboni is resolutely staying put. The architect, whose practice Next Office was founded in 2009 and today boasts a team of around 40, is pragmatic about the relative challenges of working in the Iranian capital. ‘I think architecture around the world is now hard, because of capitalism and so on. We have different issues [in Iran], but I can’t say it’s harder. It’s hard everywhere nowadays.’ The rotating facade elements of the Sharifi-ha House allow residents to decide how the house presents itself to the street. Image Credit: Salar Motahari

The built output of Next Office makes it look easy. During nearly a decade of work the practice has completed a stream of projects — predominantly residential, as well as an industrial showroom and office building — that confidently blend vernacular and contemporary Iranian architecture. Projects such as the Sharifi-ha House (in Tehran, completed 2013), with its rotating facade elements, engage in intelligent discussion between two typologies that have dominated Iranian architectural history.

‘In the middle of Iran, in the warm climates, we have one kind of typology that is introverted,’ he explains. ‘In this typology, the main courtyard is very important and the opening of the outside to the street is very limited, very narrow. The other kind of typology, which is more common in the north of Iran, is very open to the outside and the terrace is very important. Everyday life happens on the terrace — and it’s very open so wind can penetrate the whole body of the building.’

At Sharifi-ha, these two approaches are blended via Taghaboni’s playful approaches to privacy and openness. The house’s swinging units allow residents to decide how the house presents itself to the street via a mechanical system usually used in car showrooms. The point of transition between the public and private realm, of personal lives and social lives, is of particular interest to Taghaboni and the work of Next Office. He sees this as a reflection of Iran’s religious and political culture, and even the wearing of the hijab, which translates from Arabic to mean a spatial partition. ‘The border of the inside and the outside is very strong here,’ Taghaboni says, ‘so several projects think about this border and this confronting condition.’

At the practice’s forthcoming Guyim Vault House near Shiraz, southern Iran, the public-private frontier is explored via a complex arcade structure and with the intelligent deployment of negative space. The house, due for completion in 2020, experiments with a series of domes to create closed and semi-closed spaces.

Nearby, Next Office is also working on the Sadra Artists Forum, where the inside-outside border is deliberately blurred to facilitate the integration of different activities. A sloped rooftop plaza flows up from the surrounding streets, beneath which a large open void forms the so-called ‘art yard’, that leads on to more secluded event spaces. ‘These spaces connect and bleed into each other and the city,’ says Taghaboni, who believes the forum will draw together both families and artist collectives. Unfortunately, the completion date of the Artists Forum is uncertain, owing to the country’s current economic and political situation.

The Sadra Artists Forum, where multipurpose spaces ‘bleed into each other and the city’. Image Credit: Courtesy Next Office

Alongside his Next Office work, Taghaboni is a tutor at the Centre for Contemporary Architecture, a private educational institution he co-founded with a group of friends following years of teaching in conventional universities that he found of questionable quality or swayed by overwhelming ideological influence from the government.

The new institution confronts issues in Iranian architecture on an urban scale. ‘It thinks about Tehran’s problems,’ he explains, citing lack of public space, traffic and air pollution as the city’s most urgent issues. ‘For example, I teach a studio about density in the city. We review the problems and challenges of density and think about alternatives. [The school] doesn’t have the limitations of practical projects. It’s more visionary, more about the future, so we can work more freely, he says.’

Indeed, despite the issues facing contemporary Iran, Taghaboni exudes a determined, if low-key, optimism and a forward-facing gaze. Alongside a growing international profile, thanks in part to the Royal Academy’s prize, Next Office is focused on continuing its typologically innovative and culturally sensitive work in Iran: ‘We want to keep our way of thinking and experimenting with contemporary culture and have lessons from the structural and spatial concepts of Iranian architecture. The main purpose of our project is the integrity between these layers.’

As for the economic and political challenges that lie ahead, Taghaboni is straightforward and assured: ‘I hope we can make these difficulties also productive.’