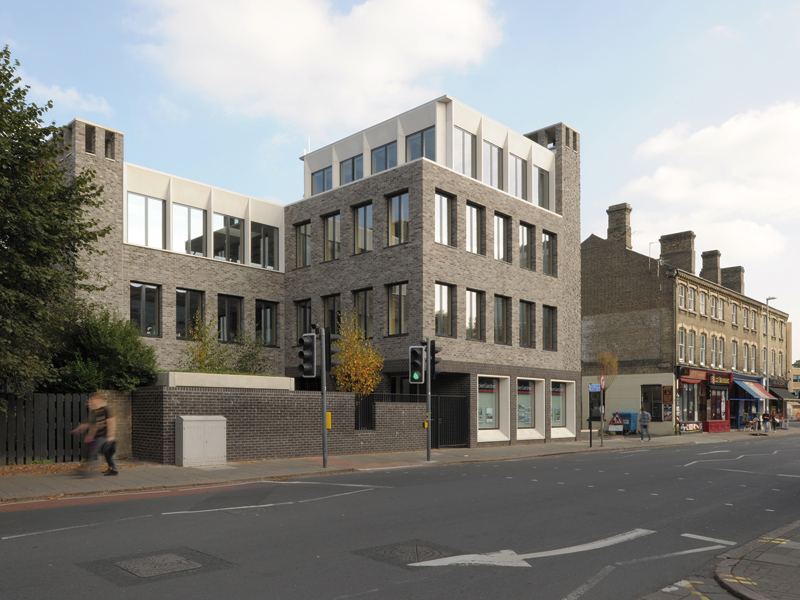 Who Jay Gort and Fiona Scott; plus 15 staff
What Architecture
Where London, UK
When Founded 2007

From a cat clinic to a public toilet, and from a low-budget community hub to Oxbridge college buildings, young London-based architecture practice Gort Scott is nothing if not versatile.

Founded in 2007 by Jay Gort and Fiona Scott, it has steadily built up a portfolio of highly original retail, residential and educational buildings, topped up by a handful of urban strategies and public-realm projects that connect and embed themselves in the context and communities in which they are placed. 'We haven't deliberately tried to specialise; we do a lot of different projects because we're interested in a lot of different things,' explains Scott. 'It allows us to see the bigger picture in terms of design. We're not myopic, we're not focusing in and constantly repeating ourselves.'

Gort and Scott first met as undergraduates at the University of Cambridge before going their separate ways: Gort to 5th Studio and Scott to Adjaye Associates. The two reconnected several years later and set up their practice after teaching together back in Cambridge's architecture department. Says Scott: 'Teaching was really how we started a dialogue together about design. Talking through ideas was a really great way to start an office because we found that we shared a lot of interests, particularly in the relationship between buildings as bold interventions in their own right and the background city that works around them.'

Yet Gort and Scott found themselves as a new young practice, at the start of the recession, without any work to their name. Having initially won a competition for a housing project in Cambridge that never came to fruition, Gort Scott began to focus on urban design and public-realm strategies, starting with a research project on outer London high streets funded by a six-month mentorship with Design for London (DfL). 'There was literally nothing [for us] in the recession, even established practices were having trouble getting work in housing. By focusing more on the public sector rather than just back extensions, it put us in a really good position when the market picked up, and I think it allowed us to be taken more seriously as a practice,' says Scott. A proposal for a new £10m building at St Hilda's College, Oxford

Subsequent London-based projects included a temporary community space in Tottenham (2012), built in five weeks in a disused yard at the epicentre of several burnt-out buildings damaged by the 2011 riots, as well as an elegant, gem-like, public toilet wrapped in a perforated, golden metal screen outside Wembley Stadium (2013). Both projects were concerned with creating a sense of collective ownership and inspiring pride in a public space.

Says Scott: 'We always approach things from the perspective of a particular context: its aspect, its views, how you approach it, and what it feels like to make a place in that location.' Fast forward and current work varies from a luxurious private house sitting on a rocky outcrop overlooking Alta Lake in Whistler, Canada, through a 20-storey residential tower in Ealing, to a research project with the GLA on housing intensification in town centres and a public-realm project for Brixton market. There is a sense that Gort Scott is growing up and maturing, having recently completed a graceful grey-brick office block for Jesus College, Cambridge, and having just won a competition to create a new £10m building and riverside pavilion for St Hilda's College, Oxford. And as the practice grows and projects get more ambitious, Gort and Scott are confident that they can continue to create spaces with a strong sense of place. Scott adds: 'Somehow the approach is similar, whether we're doing this big house on the side of a mountain in Canada or a tower in a dense part of west London.

We take real care and pay real attention in responding to and elevcating a project's surroundings. I feel like it does make a difference, and people start to notice that we're different from our competitors in that respect.'