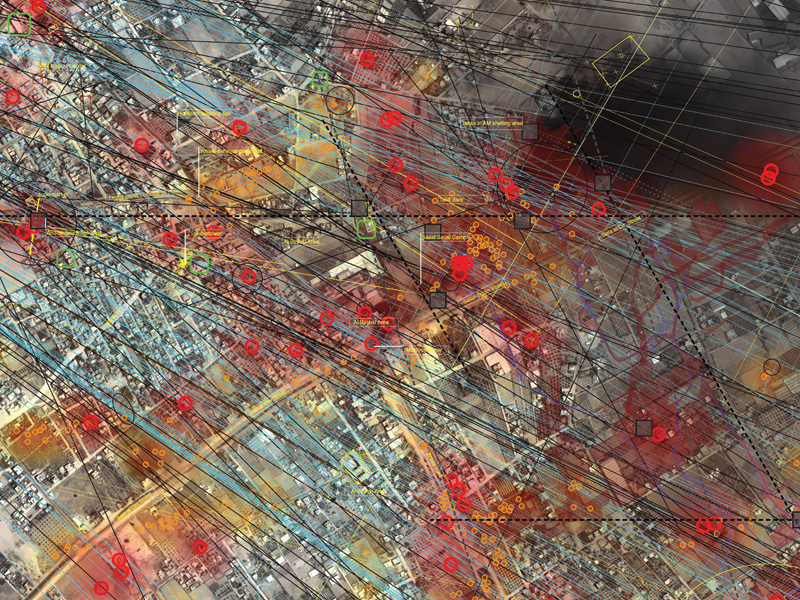 Forensic Architecture is redefining the profession — and getting nominated for the Turner Prize in the process. Veronica Simpson meets the team behind it

Forensic Architecture is an architectural detective agency. Despite its name, however, it sees itself more as a counter-forensic agency: where forensics is the science of gathering environmental evidence to establish police cases, Forensic Architecture (FA) uses its knowledge of architecture, surveillance technology and science to reveal the ways in which law enforcement, the military and government or their policies are working against the rights of their citizens. Founded by Israel-born architect Eyal Weizman in 2011, its investigations — presented as sculptural installations, or in photographic or filmic form — have become riveting highlights of various architecture and art biennales including Venice Architecture Biennale 2016, Documenta 2017 and culminating in a solo survey show in early 2018 at London’s ICA. More to the point, its architectural expertise and analysis has helped to support international legal cases against government agencies and has occasionally changed policy.

Operating from a large and airy research base at Goldsmiths, University of London, FA has made headlines recently for winning the European Cultural Foundation Award (which celebrates organisations using culture for good) as well as a nomination for the Turner Prize. Art awards were not on Weizman’s radar after he qualified at the Architectural Association. He went back to Tel Aviv to set up in practice, albeit a practice that was clearly happy to poke its nose into political issues: when, in 2002, he was invited to participate in a Berlin exhibition promoting young Israeli architects, he chose to show his PhD on the ways in which Israeli town planning is used in occupied territories to divide and suppress.

The Israel Association of United Architects cancelled the exhibition and destroyed the catalogues. Nonetheless, he managed to insert the work into the Israeli pavilion in the same year’s Venice Architecture Biennale. From that point, as he has said, he ‘accelerated from the slow violence of architecture and planning’ to the bigger picture of warfare and displacement.

An invitation followed from Goldsmiths to establish his own multidisciplinary research agency, together with his deputy director Christina Varvia, staffed by a growing team of architects, artists, film-makers, legal experts, scientists and political theorists. The practice’s analyses of bombings in the city of Rafah, as presented at its solo show at London’s ICA earlier this year

Weizman insists FA’s activities are still a form of architecture practice — utilising the profession’s capacity for synthesising contributions from other disciplines — though he admits it is at the speculative end, albeit using expertise and imagination about the constructed world to achieve tangible and useful results. The technologies behind parametricism, for example, have been used not to generate what Weizman has called ‘futile and decorative’ buildings, but instead to analyse clouds caused by the bombing of a site in the city of Rafah, in the Gaza Strip.

Using smartphone footage of the incident and architectural software, FA has analysed the trajectories of gas, dust, plaster, concrete, wood and flesh to pinpoint the type of device used, and the intended target, and therefore trace it back to the likely bombers. In this case, it was able to link the bomb to the Israeli military, and thus support a court case which alleged that it was detonated to kill one of its own Israeli officers (along with many innocent civilians) who was being held captive there; the case tied this action in with the Israeli army’s Hannibal Directive, one of whose instructions was to kill soldiers if taken captive. The directive was in due course changed, if not fully ended.

FA’s current projects include creating a 3D video map, media archive and spatial database of the Grenfell Tower fire of 14 June 2017, in which 72 people died — the scale and escalation of which may have been due to the materials and workmanship of the tower’s council-funded refurbishment.

With the stated objective to be ‘on the side of civil society’, FA refuses commissions from governments or corporations. Instead, it seeks partnerships with groups such as Amnesty International, with which it is currently attempting to reconstruct Saydnaya, a Syrian torture prison, using architectural and acoustic modelling based on survivor testimonies, to recreate what has happened there. And it is dependent on grants — which could be problematic, should the UK’s EU exit strategy roll on towards its dreaded conclusion. Most of FA’s grants come from the likes of the European Research Council (ERC), for which it won’t be eligible if no longer a EU organisation; likewise, the vital £25,000 award from the European Cultural Foundation.

For now, it is excited about the new investigations these awards can help pay for, and uninterested in whether feathers have been ruffled in the art or architecture worlds by its nomination for the Turner Prize. ‘This kind of marking of disciplinary borders is something we couldn’t care less about,’ says projects coordinator Samaneh Moafi. ‘We love this idea that we are a multidisciplinary organisation. We don’t want these boundaries.’