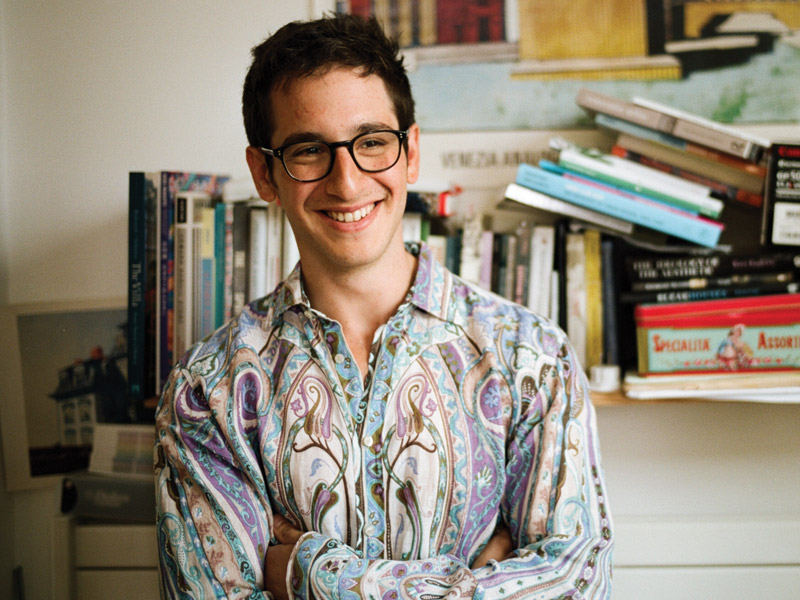 London-based designer Adam Nathaniel Furman indulges in colour, pattern and multiple historical styles — from his interiors to his installations — and argues for greater plurality in the world of architecture

It is a busy year for Adam Nathaniel Furman. The London-based designer has been in Glasgow, where his Democratic Monument project was commissioned by Architecture Fringe and exhibited as part of the New Typologies show, his Four Gateways installation is taking pride of place in King’s Cross as part of the London Design Festival and his work The Roman Singularity is being exhibited at Sir John Soane’s Museum; he is also designing an apartment in Brussels, another one in Tokyo — and is launching a new furniture pair called ‘the Nakano twins’ as well as Revisiting Postmodern, a book he co-wrote with Terry Farrell for the RIBA.

His style, like his taste, is eclectic and inclusive, which may be informed by the influence of a family tree that stretches from Japan to Israel to Argentina but is also a result of his time at the Architectural Association. ‘The AA teaches you to love everything, absolutely everything,’ he says passionately. And it shows: Furman approaches architecture as an obsessive feast. At his own admission he adores it all, records it all — and, as I discover, can talk about it all in great depth.

It’s this inclusivity, or plurality, that Furman would like to see embraced in the world of architecture. ‘We need to get away from that herd mentality, that idea that only one form or style of architecture is acceptable,’ he says. ‘There should be an acceptance of several different ways of doing things.’ Furman's Democratic Monument project reimagined what a town hall could be

Furman sees architecture as a communicative iconic form, which his recent Democratic Monument project, a proposal for a ‘new kind of town hall for British cities’, powerfully conveys.

He is fascinated by the symbolic visualisation of the notion of democracy, and the role of the town hall as that place of democratic representation, especially now.

‘I’m excited about representative democracy coming back to the regions,’ Furman explains. ‘It’s a great opportunity for architecture to give an exciting visualisation of that, and of local pride. No one relates to an anonymous council office block.’ His monument manifesto calls for ‘a civic facade whose emblematic role is to speak louder, more eloquently, with greater garrulousness and verbosity than any of the other buildings [in the city].’

Furman wanted to rethink the traditional solemnity of monumental architecture with an injection of vibrant, almost dizzying, colour and pattern. But be warned: do not call his work ‘playful’ or ‘subversive’. ‘Playful is a word that is thrown around a lot, and it’s usually used as shorthand for colour, pattern and perhaps arbitrary ornament,’ Furman says. ‘And I’m not subverting architecture — I’m dragging it.’

This ‘dragging’ of architectural forms — dressing them up, making them up in drag — is done as part of evoking an emotional, sensory response. Furman is captivated by the visual, and wants to ‘trigger people’s desire to eat through their eyes’, but for him the visual is a vehicle to connect with people, to affect them. But, he reflects, people in the UK aren’t particularly interested in this emotional form of architecture, at least not right now. ‘There is an assumption that if you use colour, you’re not a “serious” architect, that it’s somehow silly or too easy. But colour is the quickest way to affect people, to create a feeling.’ Furman has been trying to counter this narrative with Saturated Space, a research group he’s been running for the past six years at the Architectural Association with Antoni Malinowski. It’s dedicated to exploring colour as an active protagonist in design, architecture and urbanism. ‘Architects refuse to talk about colour. So we made a space to encourage them to do it in,’ he says.

Ensuring the work is emotive is a key preoccupation for the designer, but all his work has an in-depth story behind it, a narrative world that steers its creation. ‘When I did my 4 Characters in the 1st Act furniture series for Milan Design Week 2017, each piece had a name and a character. During my Design Museum residency [in 2013], I invented a fictional character in order to produce the work. I need things to mean something for me, even though the final work should communicate without any explanation.’

His research is always exhaustive — even obsessive. ‘I’m a hoarder. I obsessively hoard, archive, collect. I once collected so many antique ceramics that I became a secret eBay antique dealer to offload them.’ Furman believes in the cultural, emotional, and psychological power of ‘things’ — objects, ornaments, possessions, ephemera — much like his design hero, Ettore Sottsass. This balance between the depth of obsessive research, and the joyful, sensual experience of the work is the interplay that makes Furman’s work so distinctive. He’s busy enough as it is, but Furman is already looking ahead to the next step: ‘I need to set up a larger space and hire more staff, but it’s a big leap.’

But judging by how in demand he is, the leap may be imminent.