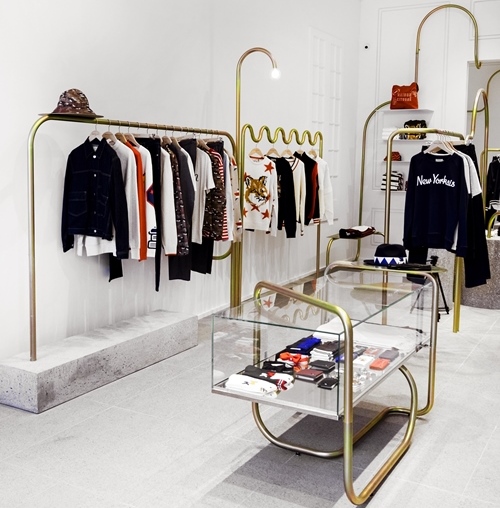 When Mathieu Lehanneur was asked to design the New York flagship store for Paris-based fashion brand and music label Maison Kitsuné, he was faced with a daunting brief.

Maison Kitsuné wanted a store that reflected the brand’s heritage of uniting fashion, music and design.

"The story of Maison Kitsuné is a story of links: the links between France and Japan and those between fashion and music. Maison Kitsuné’s new flagship store in New York materializes these connections throughout the space,” says Lehanneur.

He took the challenge in his stride and has created a quirky and stylish store on the ground floor of a huge brownstone building in SoHo.

The store has a fluid quality to it. A vine-like rail snakes its way around the space linking the concrete floor and the airy high ceilings. Follow the rail and you will be led past the showcase windows and find yourself in the fitting rooms at the back, coincidence? We think not.

Garments hang on the rail when it’s not acting as a light source or as part of the furniture. Lehanneur describes the metallic tube as a “magic pencil, drawing its own line within the space.”

The entire store has a wonderland feel which is further amplified by the opaque ‘ghost’ window panes which create a sense that there is a secret world just beyond them.

Elements of Lehanneur’s signature style of combining organic and mineral elements can be found in the variety of textures used in the store design. Marble, concrete and mirrored and bi –chromated steel create a sleek finish.

Maison Kitsuné has confirmed that it plans to continue its tradition of experimental programming, hosting events such as Kitsuné Club Night, Kitsuné Showcase and Kitsuné Afterwork series in its new flagship store.