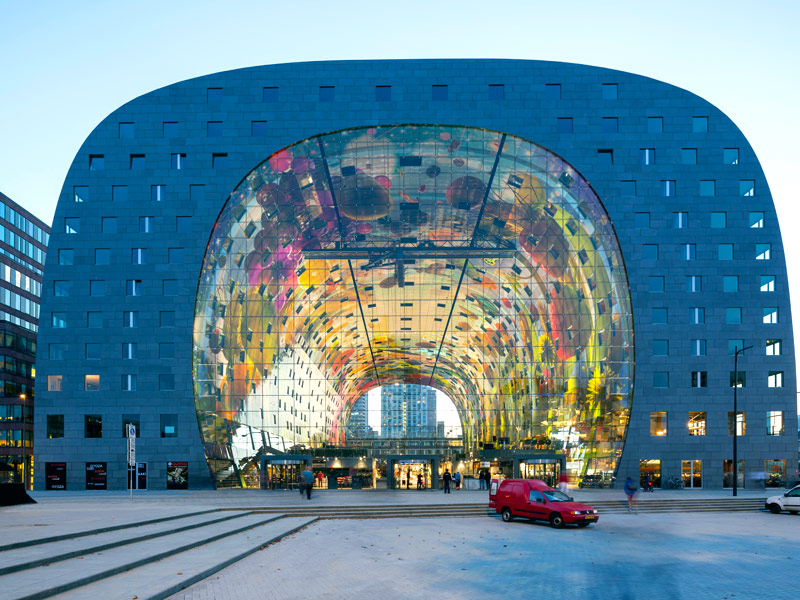 Adding its own unique signature to the regeneration of Rotterdam is MVRDV’s stunning Markthal, a market hall sitting in a 10-storey, 120m-deep arch of apartments, while the vibrant Horn of Plenty mural by Dutch artist duo Arno Coenen and Iris Roskam inside the arch is trumpeted by the developer as the largest artwork in Europe.

A need for more housing and a change in Dutch law were the triggers for one of Rotterdam's most ambitious building projects in recent years. The new law forbids the sale of meat and fish in the open air, so Rotterdam's local government needed to find a new home for the food elements of Binnenrotte, the country's biggest outdoor market.

Like cities all around the world, Rotterdam is keen to revitalise its centre by bringing in more residents, and the obvious answer would have been to throw up a covered market with housing next door. However, during the pitch process in 2004, MVRDV thought of another solution for its home town. The 21-year-old firm instead designed a vast, vaulted market hall and wrapped it in 228 apartments. MVRDV describes this fusion as a new typology, one in which the residents will have views inwards over 100 market stalls and eight restaurants operating seven days a week. Market Hall is being described by the architects and the developer, Provast, as 'the food walhalla of the Netherlands'.

This concept is in line with the architects' keenness for urban density, another example of which is its Wiener Weite 'floating carpet' proposal over the Danube in Vienna. The €175m Markthal (in Dutch) stands in a large square in Laurens Quarter, Rotterdam's pre-war centre, which was razed by bombing in 1940 and is undergoing its own redevelopment. The Markthal replaces a post-war school building, which has itself been relocated to an empty office block nearby. Its neighbours include Piet Blom's Cube Houses from the Seventies,and the eye-catching Rotterdam Library from the same decade by Jaap Bakema and Carel Weeber, as well as some Sixties' banks that look like castles, meaning that Rotterdammers are no strangers to novelty. Building regulations specify that all housing must have natural light, so the apartments have terraces on the outside.

At 40m tall, 120m long and 70m wide Markthal can't be avoided. Indeed it's expected to act as an architectural magnet, drawing between four and seven million extra visitors a year to this 610,000-strong city, according to the site's retail operator Corio. This is by no means MVRDV's most outlandish scheme, but it has demanded some well-considered technical solutions to do with both its height and depth. With such a high ceiling, so much natural light will come in that some of the stallholders will be able to grow produce on the roofs of their specially designed stalls. But the height also means that South Holland's weather -- at its wettest during October, when the building opened -- could be a problem if it was open-ended. With its novel shape, Markthal is making its contribution to the regeneration of Rotterdam

'There's a 2,800 sq m glass facade at either end because the arch is so high, rain would come 4m into the hall,' explains MVRDV's co-founder, Winy Maas. MVRDV has attached panes to a network of pre-stressed steel cables to create a suspended net that can move with the wind -- the largest such cable net facade in Europe.

Chatting while being shown around the site, Maas describes these facades as 'two tennis rackets that can move 1m in and out to ventilate the hall'. Visitors pass through revolving doors, and more ventilation is achieved through a grille in the pavement. The Markthal stands in Rotterdam's pre-war city centre, obliterated by bombing in 1940

Constructing the Markthal with four, lower-ground levels on peat soil also caused some head-scratching. The technique used was to put slurry walls around the plot, then drill in pilings as deep as possible. The water table is only 1m below ground here, so they excavated down to 20m and allowed the water to fill the hole, thereby countering the pressure from the surrounding earth that would have collapsed during the excavation. Then concrete was poured in under the water. Once the lowest floor was set, the water was extracted and normal construction could commence. The Horn of Plenty 11,000 sq m mural, depicting produce to be found in the market, was produced by Dutch artists Arno Coenen and Iris Roskam

These efforts have created a complex, multifunctional structure that includes three floors of underground parking, an underground supermarket, a state-of-the-art dispatch centre with refrigeration and storage and preparation areas. There are six goods lifts to transport produce to the ground-floor food and flower market while the first floor houses 15 food shops, eight restaurants and a forthcoming cookery school. Above all of this, are 10 storeys of apartments, 126 of which are for sale (priced from €300,000 to €1.2m) and 102 for rent. This residential breakdown is a consequence of the economic crisis of 2008. A 2,800 sq m glass facade at either end comprises a suspended net of glass panes attached to a network of pre-stressed steel cables

'Initially, fewer houses were for rent,' says Maas, 'and they were all bigger units.' They now range from 80 sq m to 300 sq m. In a perhaps unconscious nod towards the awkwardly angled windows of Blom's Cube Houses over the road, the Markthal homes have walls, and hence windows, that follow the horseshoe curve of the hall. That means that at the very top on the 13th floor, the windows are effectively on the penthouses' patio floor -- a slightly unnerving experience for the first-time visitor. 'Our first idea was to have opening windows for the apartments over the market, but the client didn't want it,' says Maas. Instead, they're sealed shut and the hustle and bustle is kept at bay with triple glazing and a double layer of wall panelling. MVRDV is now making glass tables for a couple of the patios to complement the flooring. 'We are quite engaged with the issue of glass,' says Maas, citing a new boutique opening next year in Amsterdam and the revamp of the Cheung Fai Building in Hong Kong, both of which feature glass heavily. 'Transparency was an important element of the modernist movement,' he adds. The glass-panelled curtain shelters the building's interior from the elements

All of the apartments adhere to the Netherlands' strict laws on natural daylight. Every unit has a street-facing terrace stretching its full width, while only kitchens, dining rooms and storage are on the market side. Windows overlooking the market are sealed and triple-glazed

Residents have a bird's-eye view of the three types of stalls designed in steel by Rotterdam-based interior architect Mark van der Geest. 'We created pavilions with a glass roof, a green roof (for urban farming) and an accessible roof (to act as a terrace), to give an interesting landscape from the market-hall floor and also an interesting view from the apartments,' says van der Geest. The glass-panelled curtain shelters the building's interior from the elements

Residents also look out on to the hall's vast mural. 'The original idea for the hall's interior walls was an LED screen,' says Mass, 'but that was too expensive and if we'd had a white floor and white walls, that would have made it look like Harrods Food Hall, which would have been too posh for Rotterdam.' Instead, Dutch artist duo Arno Coenen and Iris Roskam have produced a colourful 11,000 sq m image, which is being described by the developers as world's biggest artwork. Called The Horn of Plenty, it depicts produce that can be purchased in the market, as well as flora and fauna that reference 17th-century, Dutch still-life masters. 'Obviously nature is our biggest inspiration here, it's supposed to make you feel humble, like in the olden days, when churches were supposed to make you feel small,' says Roskam of the mural. 'The image, created with Pixar software, was printed on to 4,500 perforated aluminium sheets, which were then baked 'as if they were enamel,' adds Roskam. These 2mm-thick sheets were then attached to acoustic panels and screwed to the facade's wooden interior. The 11,000 sq m mural, is being described by the developers as the world's biggest artwork All this colour, and the vibrancy of the market-stall trading, is deliberately contrasted and offset by the building's stone exterior -- the same grey as the pavement. With the recent opening of Rem Koolhaas's Vertical City on the river and the overhaul of Rotterdam Centraal station by Benthem Crouwel Architects and team, Rotterdam now has three significant new structures to shout about. Whether the Markthal gets to shout the loudest remains to be seen, but it's certainly already garnering a good deal of attention.