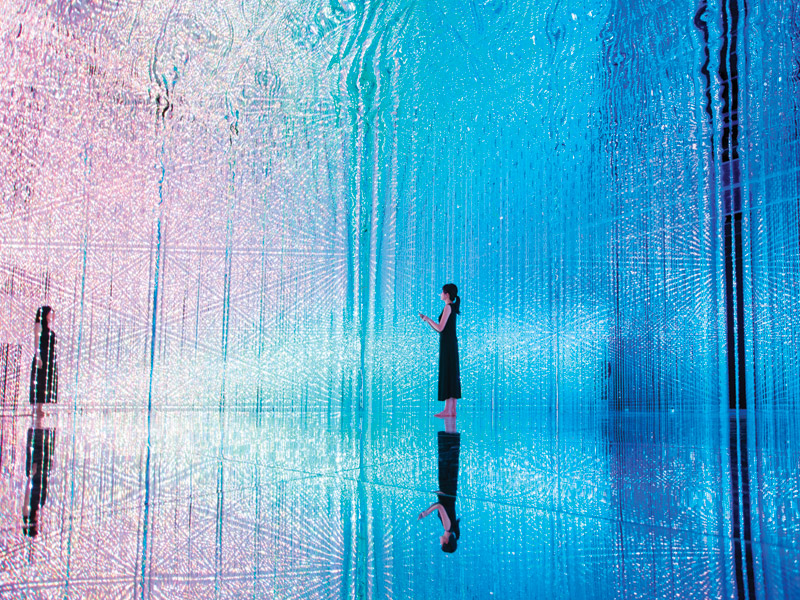 Jill Entwistle takes us through Lust for Light, a new book by artist, illustrator and art director Hannah Stouffer that explores the beauty and power of contemporary light art

Electric light being a relatively recent invention in the great scheme of things, light art has taken some time to emerge fully fledged. In the Sixties, Dan Flavin, Donald Judd and others in the southern Californian light and space movement famously used it to explore perception and ambiguity in lighting, exploring its relationship both to a space and to the viewer. James Turrell and Robert Irwin are among those who emerged from that era to push the boundaries even further, and its legacy can be seen in the work of Olafur Eliasson, among others.

There is an extensive catalogue of leading artists who have worked in this area, notably neon artists, but in some ways it had formed part of or emerged from other art movements. In the case of light and space, for instance, it was related to op art, minimalism and geometric abstraction. Somehow over the past 10 years or so the concept of light art has reached some kind of critical mass. As exhibitions such as the Light Show at London’s Hayward Gallery in 2013, and the proliferation of lighting festivals around the world confirm, light art has become most definitely a thing in its own right.

Inevitably, LEDs have liberated creative expression in many ways, with their colour range, controllability and compactness, and they are probably key to this artistic groundswell. They have not entirely subsumed other sources though. Neon and fluorescent are still in the mix.

LEDs are inarguably versatile but they are new on the block. Fluorescent tubes have their utilitarian (and Flavian) legacy, while neon comes with a cultural hinterland: its noirish overtones, insinuations of sleaze and is evocative of louche Las Vegas or garish Ginza.

A new book called Lust for Light shows that art in this field is now a broad-church term for an extraordinarily diverse range of works and approaches to light. Curated by California-based artist, illustrator and art director Hannah Stouffer (with co-curation by Katie Roseff), the book explores contemporary light art under a series of headings, from sculptural and site-specific through to colour field, photographic and projection.

It is figurative (Erik Franklin’s skulls and skeletons; Kate Hush’s ‘fiery, guileful, calculating, crazy’ neon women) and abstract (Lori Hersberger, Dylan Neuwirth). It can be stark white (Joanie Lemercier, Jun Hao Ong, Massimo Uberti) or vividly, breathtakingly colourful (Kyota Takahashi, Yvette Mattern, Liz West, Phillip K Smith III). In the best Light and Space tradition it is mind-bending and space-changing (teamLab, Yayoi Kusama, Nonotak, Olivier Ratsi) or it can be deceptively simple and evocative (the sculpture of Rolf Sachs). Lust for Light has minimal text: brief context setting, mission statements and musings on light by the artists. The book is primarily a visual showcase, a revelation of how beautiful and powerful light can be. Installation by Nonotak, founded by visual artist Noemi Schipfer and architect-musician Takami Nakamoto, They create light art, as examined in the book Lust for Light.

‘Our inquisitiveness about the nature of light, as a seemingly infinite source, often feels as uncontainable as the medium itself,’ says Stouffer in her introduction to the book. ‘Throughout time, many artists have attempted to recreate its likeness, utilise it as a source of their work, and capture the inspiring glow that it produces. There is both a fascination and familiarity with this elemental, undeniably appealing form of energy, which is both tangible and completely uncontainable.’ Born in Dallas and based in Loveland, Colorado, Franklin creates disconcerting skeletal structures using handmade, primarily clear, borosilicate glass and ionised krypton, which causes a neon glow. ‘It allows me to draw with light in space. Light interacts with glass in many ways, but I mainly use glass as a container for light. Glass is an amazing membrane that can be inflated, stretched and compressed. Much like the human body, glass has incredible strength and durability, and in other situations, extreme fragility and vulnerability... Imagery of skulls and skeletons come from a visceral and optimistic place.’

The technique is exacting, especially for the full-scale skeletons he made for the Embodiment series. ‘Every glass seal has to be perfect...in order to preserve the luminosity of the krypton. If one rogue molecule gets inside the void of the glass tubing it can eventually contaminate the gas and it will no longer glow.' Founded in 2001, the Japanese art collective teamLab has become well-known worldwide for its grand-scale, immersive projections (A Forest Where Gods Live in the 500,000 sq m Mifuneyama Rakuen Park is one of its more ambitious projects). ‘We refer to ourselves as an “art collective”, with the aim to go beyond the boundaries between art, science, technology and creativity, through co-creative activities. We believe the digital domain can expand the capacities of art, and that digital art can create new relationships between people,’ says teamLab.

The key to this new relationship is the interactivity which technology enables, says teamLab. ‘Viewers and the environment take on a crucial role in defining and changing interactive artworks. The viewer is an active participant and ultimately becomes a part of the artwork. The boundaries between artwork and viewer become ambiguous.

‘Light is just one of our tools for expression. What we are trying to achieve is to expand people’s perception of art. We think that the digital era has enabled art to expand... [it] has opened up new creative possibilities. It has also allowed us to take a scientific approach in exploring the logical constructs of ancient Japanese spatial theory.’ ‘I especially like to work with naturally translucent materials such as paper, cloth or hair,’ says Swiss-born, London and now Rome-based Rolf Sachs. ‘I also find it interesting to create opaque shapes, where the light finds its natural escape, resulting in intriguing shadows.’

His works are simple and lyrical, and while he is not exclusively a light artist, light is a recurring element.

‘Light touches the senses and can add a poetic note to a setting when used in a delicate way,’ says Sachs. ‘This is often experienced in the theatre, where the light can change the same set from austere to inviting or romantic. I have most experimented with neon, where I played with its changing appearance through altering the volume or the diameter of the glass.’ Jeongmoon Choi is a good example of how varied the field is, and the potential and possibilities of light.

The Berlin-based artist creates three-dimensional drawings in a space using fragile thread. He then illuminates them with UV light in the now blacked-out space to reveal the extraordinarily precise geometric shapes.

‘I’ve been working with UV light to illuminate my thread installations since 2006. Up until then, daylight conditions often left the thread fighting for the viewer’s attention. Some rooms had such domineering characteristics that my drawings weren’t able to assert themselves.’

The approach allowed Choi to illuminate elements selectively. ‘The lines come to the foreground, the room sinks into the background. Once this is established, visitors start to orient themselves within the installation. They reevaluate the space and discover many different perspectives from which to view.

‘The UV light room installations enable the viewer to experience the paradoxical dual nature of spatial perception. The reflective light of the threads causes the space to vibrate and the threads’ permeable outline strikes up a relationship with the infinite continuum, while the physical boundaries of the space and blurred shadows in the dim light remain intact.’

The muliple viewpoints are crucial to the works, as is their ephemerality, says Choi, who dismantles them after exhibiting. ‘In that sense my installations are all unique and short moments that only live on in the memories of the viewers, and thus can be described as “illusions”. Light stands for hope in my life. Light is one way of my work.’ Living in Kyoto, Kyota Takahashi paints elements and urban landscapes in vivid colour using the latest digital controls and WiFi technology. But he also looks to the past. ‘What I’m more interested in are those mediums like incandescent and fluorescent bulbs which have become outdated in just a hundred years.’ His work has been well received by architects, and his projections have been used on many buildings: the illumination of the Kenzo Tange-designed Tokyo Headquarters of United Nations University (2003); a light installation at the former site of Kiyonori Kikutake’s Landmark Tower (2004) and his lighting of the City House Sengawa building created by Tadao Ando Architect and Associates (2004), among many others.

He began his career as a sculptor. ‘I chose light as a material, and in the way a stonemason cuts a stone, I carve shadows into the light and create spaces. Light has characteristics like no other medium. It is a material that can move through time like music.

For me, light is now beyond mere material – it is a platform of expression.’