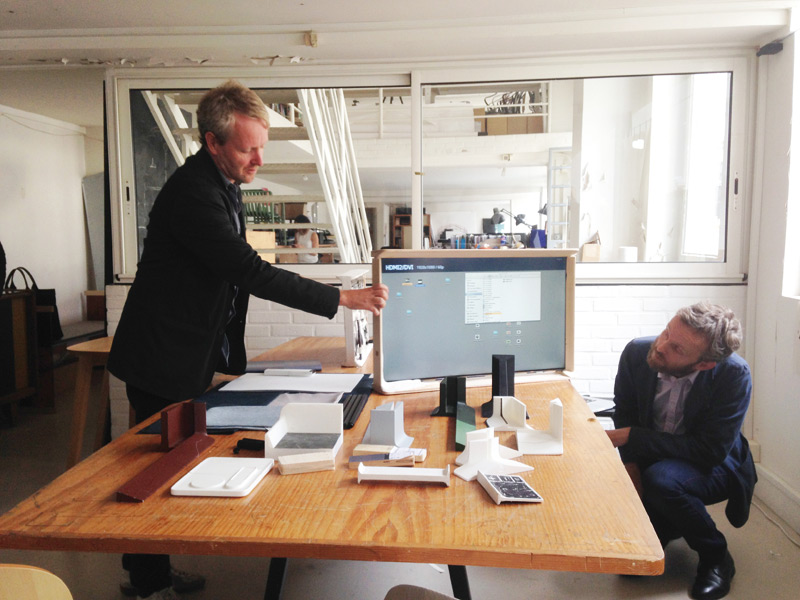 The Bouroullec brothers unveiled their first electronic product at this year’s festival, a sleek television set for Samsung, that’s more a covetable design object than a piece of technological innovation

Though rarely interviewed together, I caught up with the Bouroullec brothers in their unassuming workshop in the Belleville area of Paris, ahead of the launch of their new TV set for Samsung at the London Design Festival.

Samsung had approached the two brothers with that most exciting and perhaps most daunting brief - a completely open one. Samsung chose the Bouroullecs for their humanistic approach and because it wanted a more 'lifestyle'-oriented product rather than the usual technology driven offering that it produces.

So, the Bouroullecs were offered a free rein over what they were to design, as long as it fitted within the TV and audio world. Naturally, they jumped at the offer - not. The brothers have a great deal of Gallic nouse and aren't the kind to jump into anything. As with their design work they always carefully consider every angle.

'It's a small studio and we have a lot of requests, but generally we say no, because we have no time or no interest. When Samsung came to us, we were a bit unsure whether we should work with them. It's a great company - a big company. Normally, we work for medium or small companies, where we have direct contact; we thought working for Samsung would be a nightmare of too many people or being too complex,' says Ronan, before concluding 'I thought we had no chance to do something interesting in the electronics world.' Erwan adds: 'Yes, we wondered whether we could survive the process of working with Samsung.' Survive they did and now they have produced their first-ever electronic product - Serif. Their design work has covered everything from the carapace right through to an elegant, on-screen user interface, via the handset.

At the outset the problem was deciding what to do and that took them the best part of two years - this in a market where brands like to offer up dozens of new products a year. They ended up offering up 20 different product directions to Samsung, before fixing on the present idea (an early, strong one) and the actual design process went fairly quickly from that point.

They began by literally deconstructing televisions to find their essence. In fact, they went through so many that Samsung began sending them already broken ones. 'We wanted to directly make it,' says Erwan, 'to be able to hold it mentally and physically in the studio.' The result is a TV for the way we consume now. Or actually three TVs, starting from an extremely portable 24-inch version that can easily be popped on a table for viewing and put aside when not in use, through to the more substantial 40-inch incarnation.

Serif derives its name from the end-on profile of the product - it looks like a serif letter I. Thinness in TVs has been the focus for so long in product design that the Bouroullecs wanted to move away from that. They are primarily furniture designers and what they have created is another piece of furniture for the home, and one that isn't meant to dominate and be the focus of the room. This can be there on view - Ronan almost maniacally keeps piling things on top of the various versions to make it look like a sidetable, shelf or mantelpiece; and it can be moved out of the way when not wanted. It says: 'You don't control us, television - we control you.' It's TV in laptop mode.

Its portability means that they have also designed it to be seen from every angle: the front - obviously - the side is the serif and the back is reminiscent of old radiograms, with a magnetic clip on mesh-like cover that hides the imbroglio of trailing wires.

Visually, it's a product out of time in many ways, quite hard to define. It has lost its tech edge and been given a honed, elegant mundanity. It says: 'I'm just another everyday object - but I'm a lovely looking one.' There's also an option to put it on thin black steel legs, which makes it at once very retro, harking back to the CRT TVs of old, though with none of the bulk. This is simply a new typology for the TV. It's TV alright, but not as we know it.