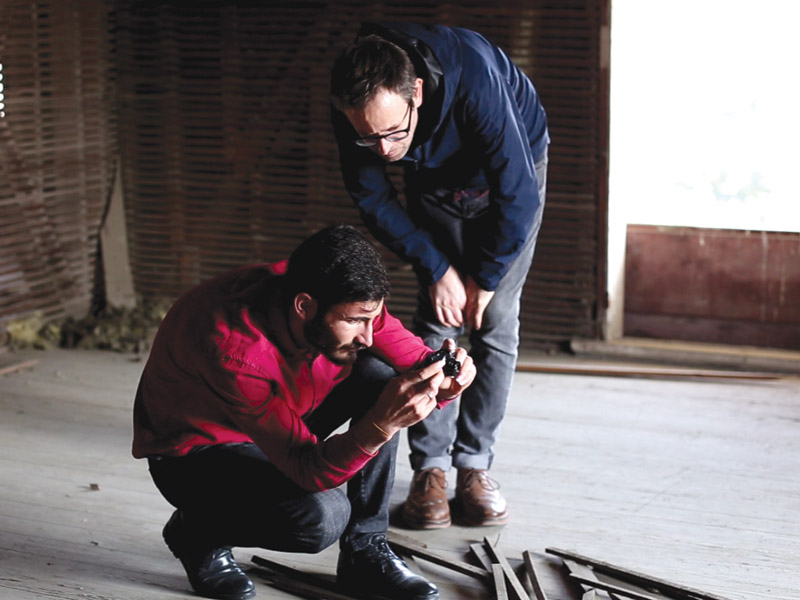 This year’s London Design Festival spanned the capital, from South Kensington in the west to Brick Lane in the east. Running for a week (15-23) in September (Design Biennale 4-23 September, at Somerset House) against a backdrop of global unease and a summer of growing climate change symptoms, the LDF’s atmosphere held a palpable sense of urgency to find answers to some of society’s biggest challenges. Responses to the problems were diverse across the festival. We observed three interconnected trends, which we’ve labelled Outraged and Engaged, Passive Activism and Sheltered Spirit.

Tackling issues head-on, the ‘Outraged and Engaged’ have an almost militant optimism, supplanting the longstanding fashion for a dystopian outlook in design.

Feeling the need for immediate action, designers have been experimenting with materials that will reduce landfill contributions. Plastic waste, and how it can be repurposed, was at the forefront of many exhibits. Brandished as a badge of honour in many products across the festival, the visual characteristics of the original waste material were allowed to dominate, resulting in a wide variety of unique recycled plastic expressions. Kodai Iwamoto’s decision to leave the printed identification on the surface of his PVC pipe vases illustrates this trend. Quietly enforced sustainability, by cutting consumer choice out of the process, was another noticeable theme of the festival. Ron Bakker of PLP architecture talked about his building, the Edge, reportedly the smartest in the world. The building’s ‘brain’ – equipped with 30,000 sensors – consumes an extremely low level of energy. It instructs the absorption of heat in the summer to be stored for winter, schedules desk time for employees to minimise energy costs and even tells the cleaners which areas need attention according to employee activity. Many of the 40 exhibitors in the London Design Biennale at Somerset House chose to use their installations to make bold ecological, social or political statements. Where Brazil focused on deforestation, Austria played out a world ‘After Abundance’ where humans must use their ingenuity to survive a dystopia. The UK demonstrated how forensic architectural technology can provide evidence of war crime in the Levant region, while the Netherland’s pink greenhouse depicted a solar-powered vertical solution to future food shortages.

While visitors were forced to confront a future of potential trepidation, they were also encouraged to engage with the possible solutions.

The daunting enormity of a world that appears broken can leave us feeling helpless. But by rethinking the ways in which an impact can be achieved, designers are making it difficult for people not to behave responsibly. Putting their faith in mass-consumer adoption, the Active Air trainer empowers collective action. With each pair of footwear filtering small amounts of pollution, the combined filtering capacity could have a big impact if every person in a polluted city wore them. Now that recycled plastics are becoming easier to process, we saw an increased choice of consumer-friendly and market-ready recycled mass products. Jasper Morrison collaborated on the 1” Reclaimed Chair with Emeco and Bolon, showcasing their premium range of recycled flooring. With manufacturers finally investing in recycled material options, will ‘recycled’ become the standard of the near future and take less of a lead role in a product’s attributes? In addition to recycled plastic, designers have also been experimenting with bioplastics and discarded food waste. Fernando Laposse makes his decorative surface, Totomoxtle, from discarded corn husk. Produced for veneer and marquetry, the panels are hand pressed and bonded ready for cutting.

Leveraging familiarity is a common strategy for making new materials desirable. In appropriating the appearance of hardwood, Laposse has automatically elevated the perception of his material. Consequently, the desirability of the product takes centre stage. Feeling that we have reached saturation point, many of us simply want to switch off and shut the world out. Ranging from defiance in the face of the world’s ills to just wanting a break, there were many exhibits this year that offered us a way to lose ourselves, to protect ourselves, to keep the world at bay. A theme that’s seen a regular resurgence since the 2009 financial crash, nostalgia is used by designers to transport us away from our worries. A cross between a childhood dream sequence and a post-war, white-goods advertisement, Bompas and Parr’s ice cream parlour SCOOP encourages you to lose yourself in its investigation of the past, present and future of ice cream. Offering a different kind of flashback, Lee Broom evolved his Department Store pastiche into his Observatory – small, slick, sensory lighting compartments. Thick velvet carpet, mirrored plinths and vertical blinds formed echoes of a retro corporate lobby. The efforts to keep the world out are, naturally, translated into physical barriers. Following this trend are high-backed and winged chairs, intimate enclosures and workpods. The Berco by Se7e is a great example of this: a modern twist on a rocking chair, this three-quarter pipe cradles the user in a giant cushion. With their purpose-built, enclosed workspaces, companies like the MeetingPod Co and Nookpod are also signalling the desire for privacy.

Experimenting in three dimensions, Ilco’s ‘Into-form’ furniture is a collection of simple, child-like shapes. Velvet upholstered and squishy, these are places for lounging, for rearranging, for playing. A reminder that, for some, design is simply to be enjoyed. Upholstery plays a big part in this story. Soft and cuddly, felt and other fur-like fabrics dominate this trend, while forms take on a nest-like purpose – an enveloping safe haven for the world-weary. — In our aim to mend our planet, the subsequent investigation into how we can be sustainable designers dominated this year’s LDF. While past exhibitions and projects attempting to tackle this issue have come and gone, the diverse directions seen in LDF 2018 seem to represent a significant and concerted change of mind-set.

We take heart from the number of designers participating in the search for solutions and hope that this movement has the traction and momentum to evolve into a multifaceted seachange that sets the standards of the future.