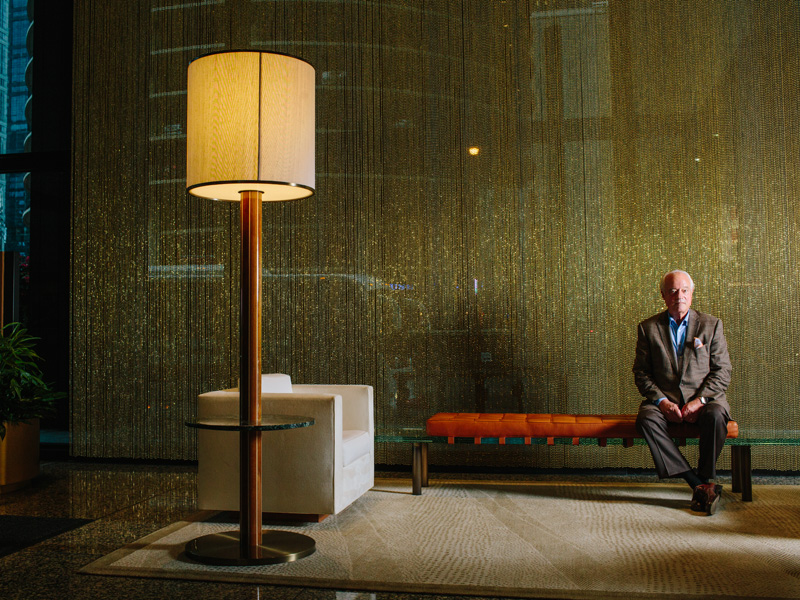 Having worked on the uncompromising IBM building in Chicago 50 years ago with his grandfather Mies van der Rohe, Dirk Lohan has been called back to help with the reception part of its conversion into a luxury Langham hotel, in which Mies’ ‘less is more’ dictum was apparently not the driving factor.

'It's not very Mies,' says Dirk Lohan dubiously, in one of the great understatements of the year. We are standing in the double-height reception hall of the Langham Chicago hotel with what looks like dozens of multicoloured glass balloons swimming above us and a mirror-glass frieze adding to a cacophony of glitz and dazzle.

It is indeed the very antithesis of the aesthetic of the architect known for the phrase 'less is more'. But then the audacious idea of converting an office building by the most functionalist of architects into a five-star hotel was always going to be problematic. The venerable Mies van der Rohe, followed by his grandson Dirk Lohan, arrives for a meeting

'When the idea came up, I was one of many who were sceptical,' admits Lohan, who has his own partisan view. As Mies van der Rohe's grandson he carries the legacy forward, if not quite to the point of eschewing ornamentation in his own practice.

'This is my bling,' he says of a tall, bronze-beaded curtain, which brings restrained glamour to the warm but understated entrance lobby below us. Here, Lohan was called in to form a bridge between uncompromising floor-to-ceiling, plate-glass windows and the opulence of the hotel above. Lohan, who worked on the building with van der Rohe when it was commissioned nearly 50 years ago by IBM, was called back in by new owners to adapt the lobby to its new use as a house of luxury. The former IBM building in Chicago at dusk. It was clad by Mies van der Rohe in brown, anodised aluminium

IBM must have had Mies' iconic Seagram building in New York -- unveiled a decade earlier -- in mind when it asked Mies to colour its new regional HQ in bronze. From the outside, however, it is a less spectacular monolith, due to specifications and site problems. The Chicago building is clad in brown anodised aluminium instead of actual bronze, and the thrilling sweep of plaza that is a Mies landmark is lost in the melee of surrounding skyscrapers. The building itself, at the time of its construction the city's third-tallest, is now dwarfed by the giant Trump Tower which went up next door in 2008, depriving the IBM building of most of its view of Lake Michigan. The 52-storey building, Mies' last at the age of 80 and completed posthumously, is in his typical uncompromising skyscraper style, all floor-to-ceiling glass separated by steel mullions at 1.5m intervals. But it was groundbreaking at the time in its use of double glazing and other energy-saving elements. 'It really was one of the first green office buildings,' says Lohan, who arrived from Germany just in time to assist his grandfather with the project. 'The design vocabulary was already in place, but what was truly innovative was the technology.' Many aspects of the design work well for a luxury hotel, he points out: 'The distance between the windows and the core -- some 40ft [12m] -- is a sizeable space which allows for really large hotel rooms on all sides of the building.' And Mies' beloved travertine, which has been picked up from the lobby and used lavishly throughout the 13 floors that comprise the hotel, is a luxurious as well as functional finish.

While Lohan has designed several hotels himself -- and also a fair few iconic buildings in Chicago -- he was only invited to design the lobby of the Langham, where his task was to differentiate the hotel space from another lobby, serving the 75 per cent of the building filled with offices. 'It's pretty sparse,' he nods towards a dispiritingly blank commercial foyer in which only a couple of Barcelona chairs nod to the building's heritage. By contrast, Lohan's lobby, the first point of contact for guests before proceeding to the second-floor reception, is a warm and welcoming space furnished with sofas and chairs that Mies designed for his family but never put into mass production. The seating area is presided over by a striking bust by Jaume Plensa, echoing a series on display in the city's outdoor sculpture showcase, Millennium Park. Frankly, Lohan's 29m run of beaded curtain, a witty nod to the late Sixties, seems blingy enough, but apparently not for the owner, who demanded a stronger statement in the reception area from London design practice Richmond International, which had worked on the very different, neoclassical Langham London. Principal Fiona Thompson admits it was a challenge imposing contemporary ideas on an iconic building from a more pared-back age. The reception now features a cascade of multicoloured glass pendants intended to evoke pebbles in the Chicago River, says Thompson, who considers them an 'art installation' which may not be permanent.

'We felt it was necessary to relate to Chicago as well as the building, and also respect the wishes of the owner, Great Eagle of Hong Kong, to create a luxury hotel that was neither mid-century modern nor classical like the Langham London.' She feels the frieze of faceted mirror glass around the back of reception is not at odds with the building, and points out that the travertine and walnut of the ground-floor lobby were virtually all that remained as reference points of the original interior before it was gutted by generations of corporations that succeeded IBM. 'So we have used those copiously, and also real bronze in some of the ironmongery,' she says. Walnut, a material specified by van der Rohe for the original interiors, has been used extensively for the new hotel

Lohan admits his own restrained style is less in keeping with the taste of Great Eagle -- 'I'm not opposed to colours or comfort, but I felt the interior design of the hotel should relate more to Mies' architecture' -- and believes that his help was sought principally in order to get a tricky modification of the exterior past Landmark Commission officials, where he is seen as having some influence. 'A canopy was needed to distinguish the hotel entrance so that you can see it from the street,' he explains of the building, listed in 2007, a year before the idea of a hotel was dreamed up by its previous owners. Modifying a listed envelope is always tricky, but the bronze awning fitted with starburst, pinhead lights is an elegant solution, certainly far less vulgar than the 6m-high letters affixed to the exterior of the hotel opposite, spelling out the Trump name. 'And when your front door is opposite that huge building with its huge canopy, you have to make at least a little bit of a statement,' says Lohan.

This elegant and most well-pedigreed of architects lives in another of his grandfather's Chicago landmark -- the penthouse in one of Mies' few residential buildings: '860-880 Lake Shore Drive were the original steel and glass towers that started this whole movement,' enthuses Lohan, waving his hands towards the Miesian ocean out there on the skyline, monolithic steel and glass disciples paying homage to the master. Ironically, Mies chose not to live in his residential tour-de-force, despite being given an apartment by the developer. 'His excuse was he didn't want to ride the elevator and be stuck listening to residents complaining about their plumbing,' explains the grandson drily. After half a century in the USA, Lohan, himself perfectly turned out in a beautifully tailored tweed jacket with a yellow silk handkerchief in the pocket, retains a strong German accent -- though he has made more of an effort than his grandfather to learn the language of his adopted country: 'Mies resisted fleeing Nazi Germany when he was first invited, years earlier, because he didn't speak English,' he laughs.

Joining the family firm in 1962, Lohan also worked with Mies, from his new home in Chicago, on the New National Gallery in Berlin and the Dominion Centre in Toronto. He then went on to design several important buildings in the Second City, including an HQ for another corporate giant, McDonald's, and additions to the Shedd Aquarium and Adler Planetarium. Lohan sits with more walnut, bronze and bronze-coloured ornaments, a reference to the building's exterior colour in the Langham Club's lounge, a VIP section of the hotel.

As he bids me goodbye in the glitzy reception he had no part in, Lohan surprises with the kind of diplomatic, political remark that distinguishes him from his grandfather -- Mies was fiercely blunt with clients, simply ignoring those with whom he had creative differences. 'Overall, I would give this hotel a very high rating,' says Lohan. 'Sure, it's glitzy and there are too many mirrors, but the owner has spent money -- it's quality. And you have to give them credit for taking on the difficulties of dealing with a landmark building.'