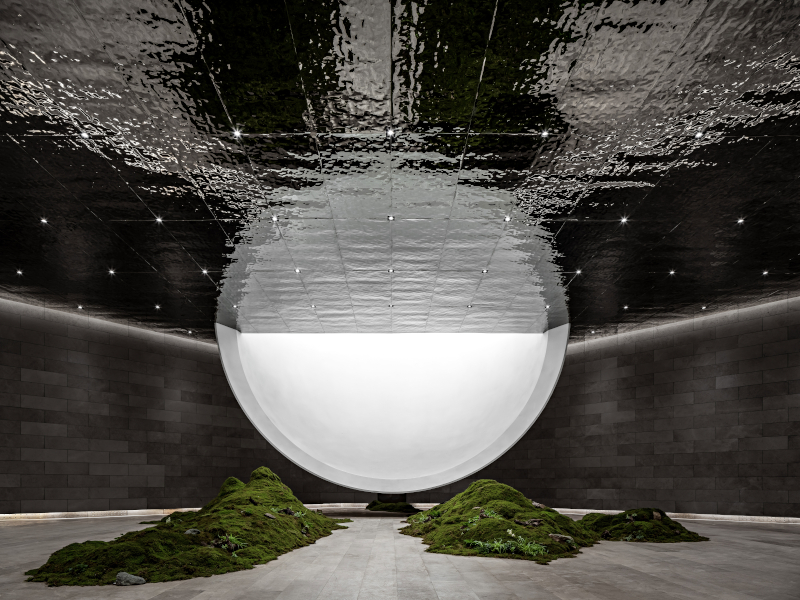 Illumination, and the many ways it can be manipulated, empowers designers to transform spaces for a purpose or simply in search of beauty

LIGHTING ARTISTS Lighting artists have always understood the power of light to play with our perception of a space. They have exploited that quality by lighting objects in a particular way (Olafur Eliasson’s strobe-lit fountains, for instance), used self-illuminated sources such as fluorescent and neon tubes to redefine the idea of solidity (Dan Flavin), or illuminated vertical and horizontal planes with colour to melt away boundaries (James Turrell).

All light art has lessons and inspiration for architectural lighting and interior design. In many cases the two spheres have merged and it is increasingly difficult to say where one starts and the other ends.

The Fiat Lux.3 Architectures of Light installation was created by lighting designer Antoni Arola and Spanish electrical accessories, controls and luminaire manufacturer Simon. It was located in the Cultural Centre of Villa Fernán-Góm at the Madrid Design Festival in February and March this year.

The premise is simple, using a smoke machine, lasers and objects including a small tree to create ‘non-existent spaces’.

‘Architecture is created from light,’ says Arola. ‘Light is a building material. Non-existent spaces appear out of nowhere, mutate, mix, cut, dialogue and fade away.’ 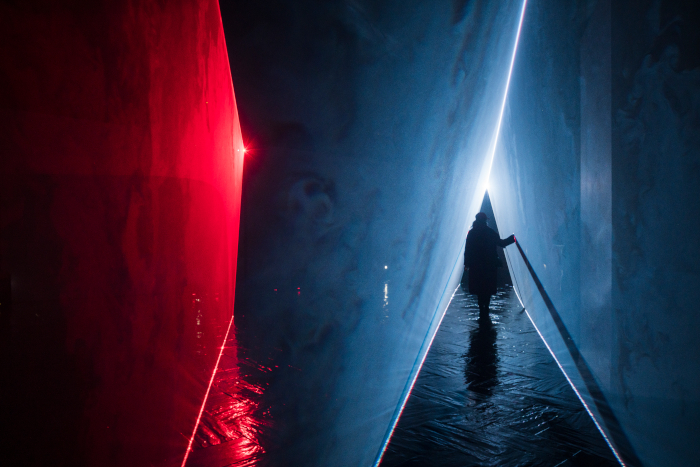 The exhibition hall was filled with smoke at timed intervals while lasers positioned on lighting stands created two-dimensional planes of light that sliced through the smoke. These two-dimensional planes formed walls of light, which Arola describes as ‘construction elements’ that change and move as they are interrupted by objects and passing visitors.

‘This set-up is designed to invoke unique sensations and emotions in each visitor and showcase light as a creative element with a great ability to transform,’ says Simon.

A tree forms a focal point for the exhibition and is fitted to a motorised base that slowly spins and rotates. Lasers were positioned facing the tree and panned side-to-side to create piercing strips of light as the planes came into contact with the tree’s rotating branches. Wooden panels suspended from the ceiling and the equipment also interrupted the light paths to create openings within the spaces. A soundscape by Mans O was paired with the light installation to provide visitors with an immersive experience.

The installation forms part of an ongoing project with Arola and Simon that evolves and adapts to different spaces as it moves location. It was previously shown at Catalonia’s Lluèrnia festival in 2021.
www.estudiantoniarola.com | www.simonelectric.com

THE CENTRE, MUSEUM OF THE FUTURE IN DUBAI

The Museum of the Future is designed to transform our perception of the future through a series of immersive environments. ‘By meaningfully merging aspects of science, art, technology and spirituality, the museum inspires humanity to reimagine the future and all its possibilities,’ says the Dubai Future Foundation, of which the museum is part.

Especially created for the museum, The Centre is an inhabitable media artwork that uses light, water, vibration and sound to stimulate the senses. ‘An antidote to an evermore digitally saturated reality,’ says JBS, ‘The installation offers an immediate, visceral experience inspired by historic ritual.’ 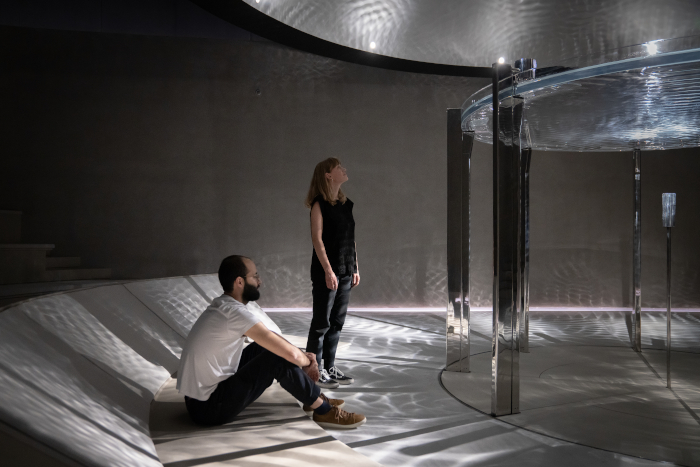 Recalling centres of spiritual and physical healing throughout time and across different cultures – from Victorian spa therapies to Tibetan gong baths – the central space is an elevated ‘well’ with a shallow layer of water.

Highly controlled oscillations act on the liquid, while an immersive soundscape envelops the room. Light cast through the central lens projects caustic (optical effect of reflections and refractions) animations into a vast architectural dome, bathing visitors beneath in delicate, liquid light. Continuously evolving, the light and soundscape uses a tightly choregraphed palette of effects including clouds, rainfall and streams, inspired by the water cycle. 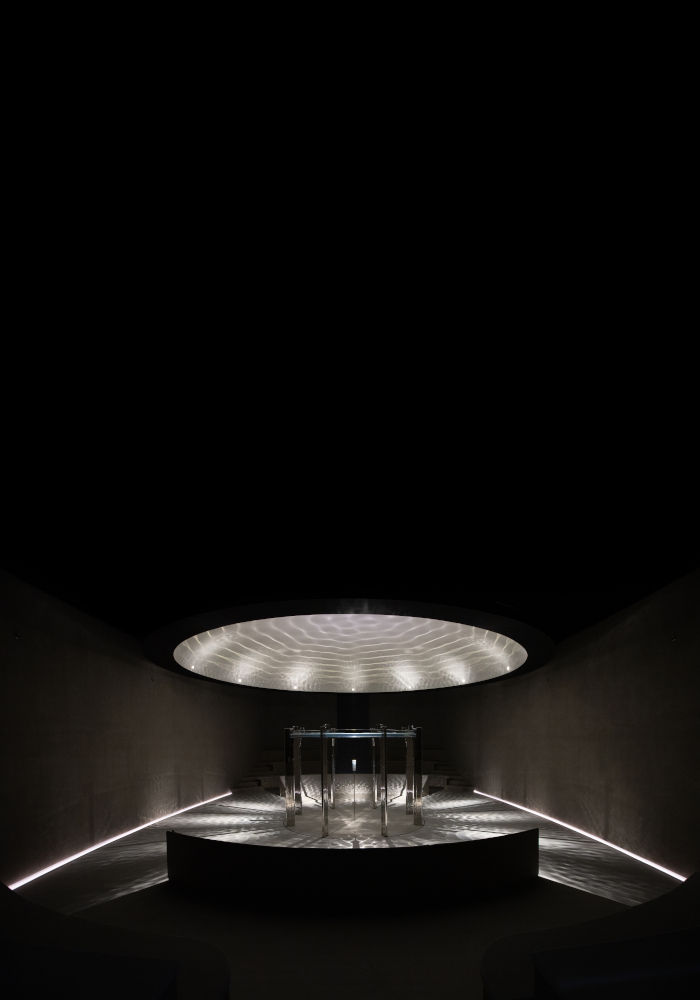 ‘This project offered a rare opportunity to push the realms of the possible,’ says Jason Bruges, creative director and founder. ‘With The Centre we wanted to create a feeling of self-transcendence. To provide a space that is spiritual and meditative but also grounding. That allows people to feel connected within themselves, with each other and with physical reality.’
www.jasonbruges.com

The reflective qualities of water make it a perfect and perennial canvas for light. Here, in a very precisely calculated scheme, it is cleverly used to create the illusion of a full moon from a hemispherical structure with an illuminated semicircular window. The use of a highly reflective ceiling below water level repeats the illusion in the interior space. 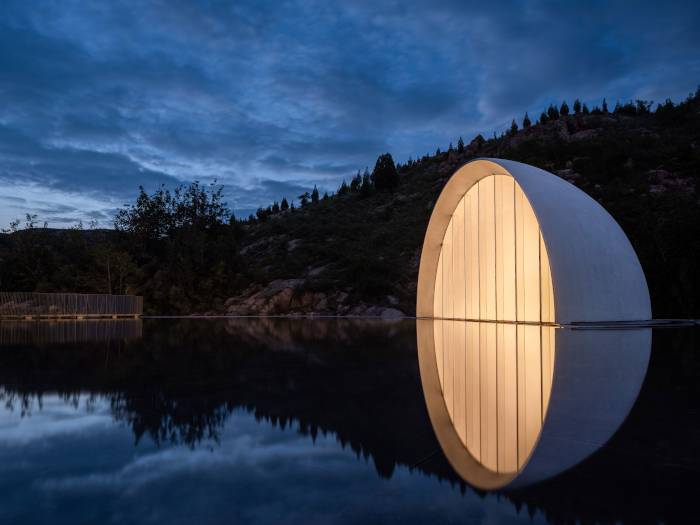 Hometown Moon is a ceremonial hall for weddings and part of a creative strategy commissioned by the Lushang Group in 2019 for a 55 sq km area north of Tai’an City, designed to encourage visitors to explore the natural landscape and to better connect the local villages.

The chapel building is a concrete structure, with a large exterior canopy that holds the water and is supported by columns set in deep cut-outs that are illuminated at night. 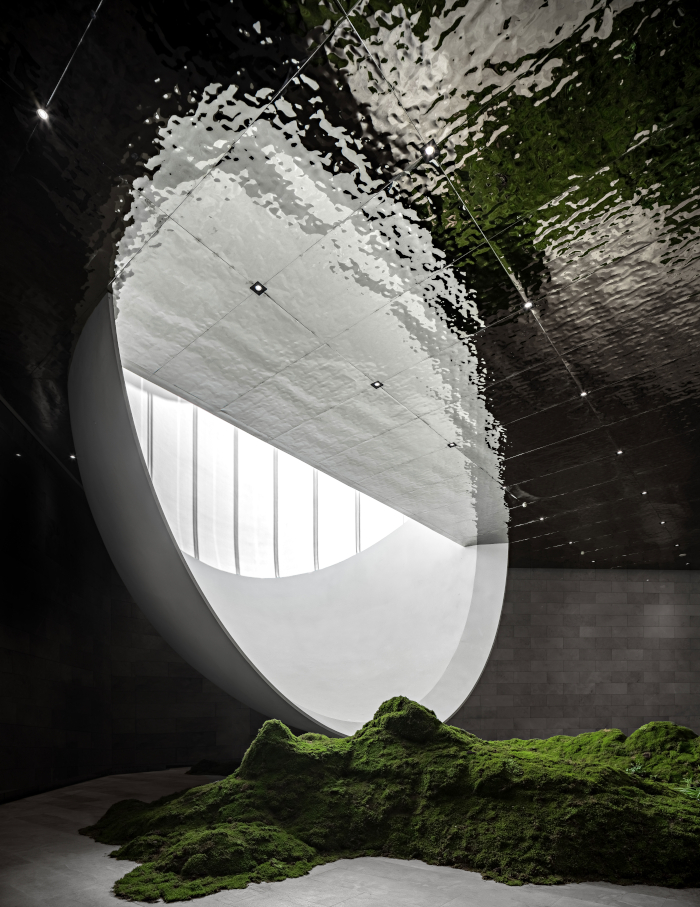 A visitor gives an idea of the structure’s scale. Image Credit: ZHENG YAN

The semi-spherical form cuts through the hall’s roof plane, emerging above as an illuminated window and bouncing light down into a dramatic light-scoop and into the double-height ceremonial hall below. The thin pool of water on the roof creates a reflection that turns the ‘setting moon’ into a ‘full moon’ from a distance. Inside, a similar effect is produced by the mirrored ceiling, which also amplifies the natural light and negates the need for artificial lighting.

The whole project was subject to constraints and careful calculations. The diameter of the moon and the area of the water surface had to match exactly to ensure that the architectural structure and its reflection formed a perfect circle. The cavity in the building also needed to contain half of the moon with a diameter of 12m, while allowing sufficient height to host ceremonies. 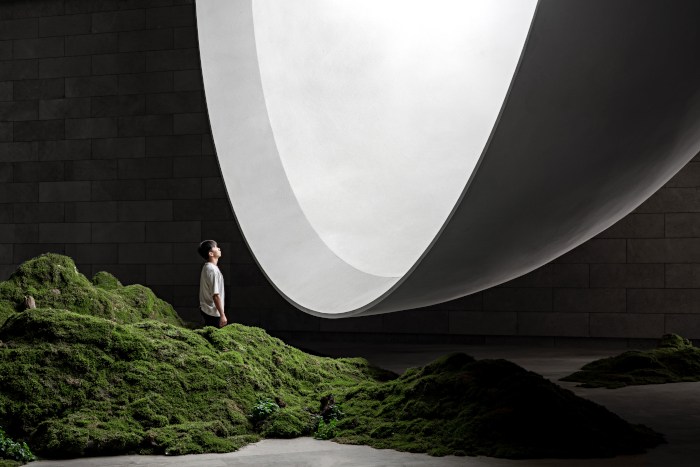 Determining the depth of the roof pond needed to take into account the rate of water evaporation. A water reservoir 0.5m deep combined with a central interlayer device work together to reduce the hydration frequency.

The beauty of the landscape was crucial to the effect of the structure and also to its journey. ‘Since the completion of the building, it has started a dialogue with users and nature,’ says lead architect Zou Yingxi. ‘I look forward to seeing it being modified over time, further blending with the environment as the trees grow.’
www.bau-jl.com

A Best of Best winner in the exhibition category of the AMP Architecture MasterPrize 2021 was an installation art space for Japanese dance. Commissioned by Egiku Japanese-Dance Products, it is designed to evoke the lotus flower, a sacred flower in Japan, particularly viewed at early morning when the blooms are shrouded in a light mist. ‘The main theme of Japanese spatial design is not to design the form itself, but to design the effect brought about by the manipulation of the form,’ says Nakamura.

The installation comprises more than 1,000 ultra-fine vertical lines made of 4 sq mm Japanese cyprus wood (also considered sacred). These are attached to a delicate lattice, assembled with 1mm-diameter metal rods, and suspended from the ceiling. These are illuminated by spotlights. The spatial points were calculated and positioned, one by one, using 3D design modelling to create ‘a fog-like gradation of light’. 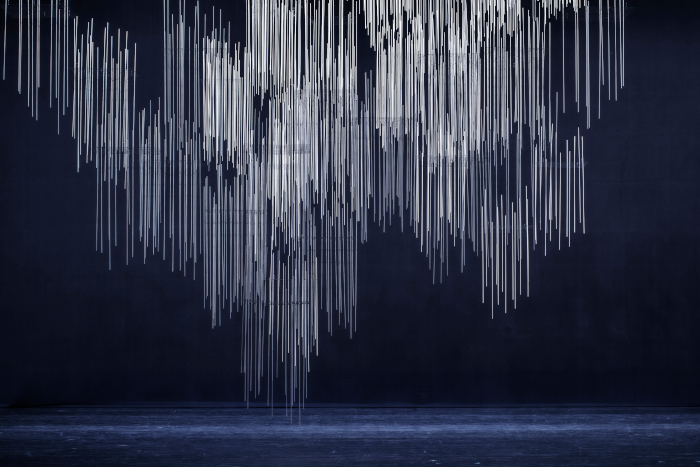 ‘In Japan, fog represents profundity and has a sacred atmosphere,’ says Nakamura. ‘It is a mist formed by delicate light and water particles that catch the light. I tried to design a new space by objects that have such a vague appearance.’

Using the line in this way reflects Japanese ideas of beauty, ‘as if it softly absorbs light, rather than strongly repelling it,’ continues Nakamura. ‘By designing the sparseness of how the lines come together, a gradation with shades of transparency is drawn, spreading across the space. The delicate artwork touches the light and depicts the vague figure of light, revealing the existence of the air that fills the space.’
www.nkdesign-works-blog.tumblr.com

Arola has collaborated further with Spanish manufacturer Simon to create a flagship showroom, demonstration and experience space in Madrid. Housed in a landmark building in the capital, originally designed by internationally renowned Spanish architect Fernando Higueras, the space has been completely redesigned by B720 Fermín Vázquez Arquitectos. 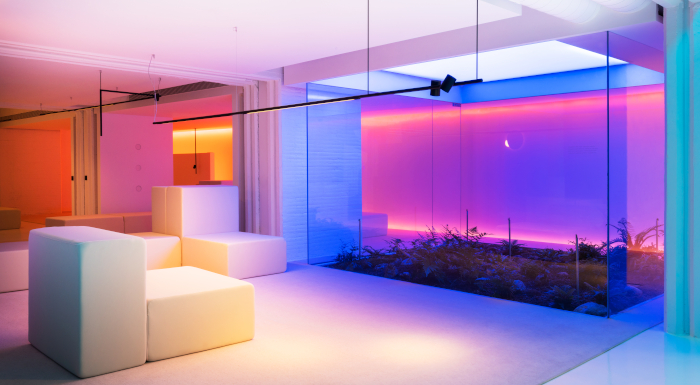 The modernist, minimal interiors and original areas created for planting – Higueras’s ‘geography’ of the building has been respected – form an ideal backcloth for lighting effects. The lighting, which in certain key demonstration areas has more than a whiff of James Turrell, combines Simon luminaires and electrical accessories with a ProtoPixel control system. ‘It has been conceived to be able to show, demonstrate and exemplify different uses and atmospheres and the changeability of light,’ says Arola. ‘It suggests thousands of possibilities to specifiers and clients. It is a huge space to learn about light and its control.’
www.estudiantoniarola.com | www.simonelectric.com