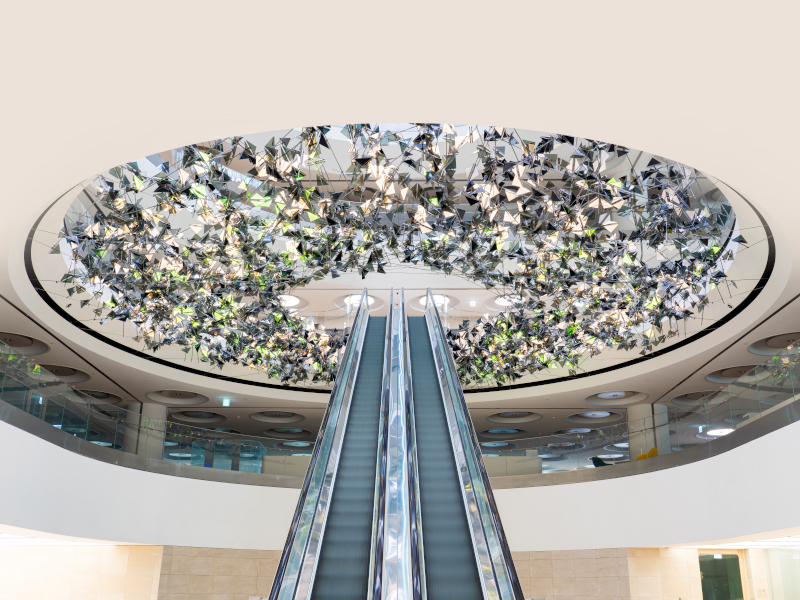 Exploring a range of lighting projects, which use the ceiling as a canvas

NOT STRICTLY SPEAKING in a lobby space, in that it sits in the centre of the building, but in the spirit of literally heightening the visitor’s arrival experience, Digital Phyllotaxy is a dynamic installation for Hankook Tire’s new Foster + Partners-designed headquarters in Pangyo, Seoul. Devised by multidisciplinary art and design practice Jason Bruges Studio, which also created a further work, Dynamic Tread, it was part of a brief to create a series of spatial interventions, which evoke tyre specialist Hankook Tire’s ‘creativity and craftsmanship’.

Digital Phyllotaxy is a physical metaphor for a tree, deriving its name from the arrangement of leaves on a stem. Inspired by the vertical journey through the building, the artwork explores the idea of split-level experiences, says JBS. ‘As people ascend through the vast architectural “oculus” they witness the interplay of dappled light below, within and above the canopy. Leaves digitally rustle and change colour with the seasons transforming the journey on the escalator into an encounter with nature.’

The installation is 16m in diameter and uses a bespoke media assembly comprising edge-lit LED units and liquid crystal shutters. The layering of each component is a choreographed play on light and shadow representing the way light filters through leaves. A range of inputs including movement, sun paths and wind speeds, trigger generative colours and textures. ‘The result is an ever-changing arboreal world that welcomes people into the building,’ says JBS.

At the top of the escalator visitors also encounter Dynamic Tread, a triptych media artwork which sits behind the main reception. A large-scale matrix of cylindrical glass nodes, with embedded LED arrays, the artwork analyses live weather data and from it creates complex light compositions. The radial monochromatic patterns represent the changing tyre treads as weather conditions shift outside.

‘With Digital Phyllotaxy and Dynamic Tread, we’re using technology to mimic qualities from the natural world, says JBS’s creative director and founder Jason Bruges. ‘The entrance into the building feels like a walking through a forest. It is fresh and alive embracing the principals of biophilic design to create a space that is restorative and supports people’s wellbeing.’
www.jasonbruges.com

THE CLOUD, installed in the atrium of a newly extended and reconfigured office building, is one of the largest chandeliers ever constructed in the UK. Adjacent to Liverpool Street Station and the future Crossrail Station, 100 Liverpool Street comprises 48,000sq m of office space following extensive rebuilding and extension. Speirs Major was responsible for both the venue’s interior and exterior lighting schemes.

The vast atrium space is on the second floor and features the main reception, cafe and informal meeting/ flexible work areas. It was this space that presented a particular challenge. Natural light studies determined that for most of the year artificial light would be needed even during the day. They also showed that light from the perimeter would not be sufficient. 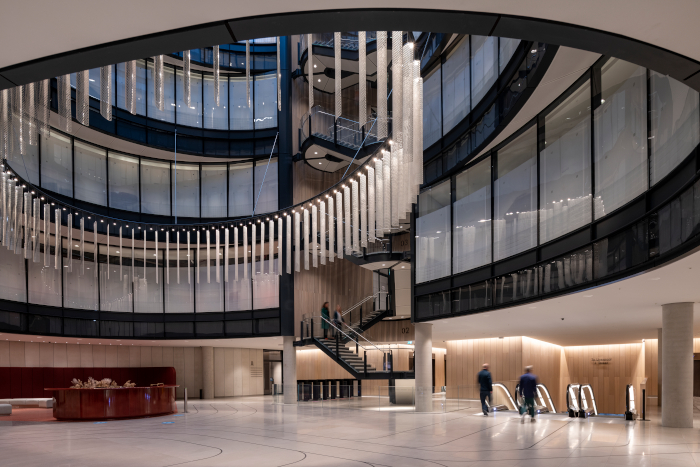 The large-scale Speirs lighting element in the 48,000 sp m Liverpool Street office space is one of the largest chandeliers ever constructed in the UK. Image Credit: JAMES NEWTON

Informed by the grid of the building and working with access issues for cleaning, Speirs Major proposed a large-scale lighting element to hang in the void. The Cloud, which measures 14.5m by 8.9m and is 7.8m high, acts as a point of reference for all the multiple viewpoints from the offices and terraces into the void, helping to humanise the space, while emphasising its impressive volume.

‘As a design team we settled on having just one large object, rather than a series of objects – a clean, simple, and practical solution that could be executed at the right scale,’ says Mark Major. ‘The geometry of the piece is entirely derived from the architecture, and the blade design draws on the language of materials that Hopkins and UDS used in the architectural cladding and interiors.’

The overall, oval-shaped structure is made from stainless steel, while the suspended panels are aluminium, one side polished, the other with a matt white paint finish. ‘Their dual nature, one side matt, one side reflective, was developed so that the effect reads slightly differently depending on which way round you walk – a nod to the natural variation of a cloud,’ explains Major.

The 80 panels are individually illuminated from above by integrated LED downlight modules, which also provide lighting to the floor below. The panels are perforated to further exploit their lighting effect. ‘The perforations in the blades create an interference pattern that scatters light, creating further “cloud-like” texture,’ says Major.

The downlights house Lumenetix modules, which can provide variable colour temperature from 2,000- 6,000K, in addition to full-spectrum RGB colour-change tones. For typical use, the chandelier has been programmed to be 3,000K during the day and 2,400K during the evening/night.

100 Liverpool Street has achieved a BREEAM Outstanding rating and is on target to achieve WELL Gold certification. www.smlightarchitecture.com 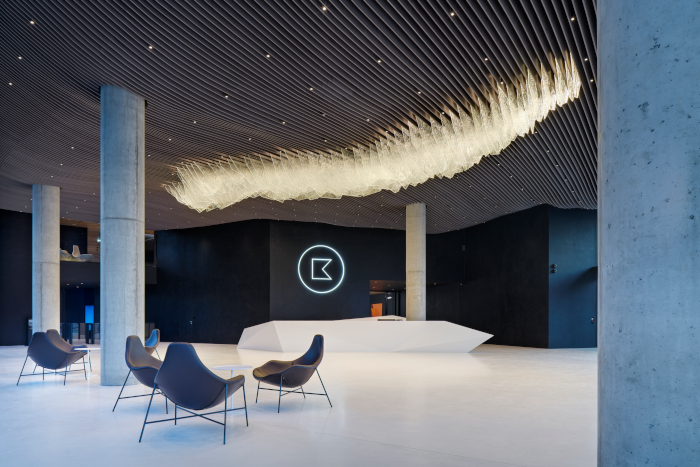 ALSO ON MATTERS of who’s got the biggest, Czech glass specialist Lasvit has created its largest artwork in Europe. The Iceberg, made of crystal glass, occupies an area of 463sq m of the ceiling above the entrance hall of the new headquarters of investment and real estate group KKCG. ‘It was very challenging to work with such a huge space and unique technology,’ says Lasvit’s art director and the installation’s designer Maxim Velcovský.

The Iceberg’s giant panels are made of flat sintered glass that gradually lights up to form an impression of a living organism. The glass peaks stand out from the wooden surface which represents the sea. It comprises 110 glass components and 1,503 pressed wooden boards. 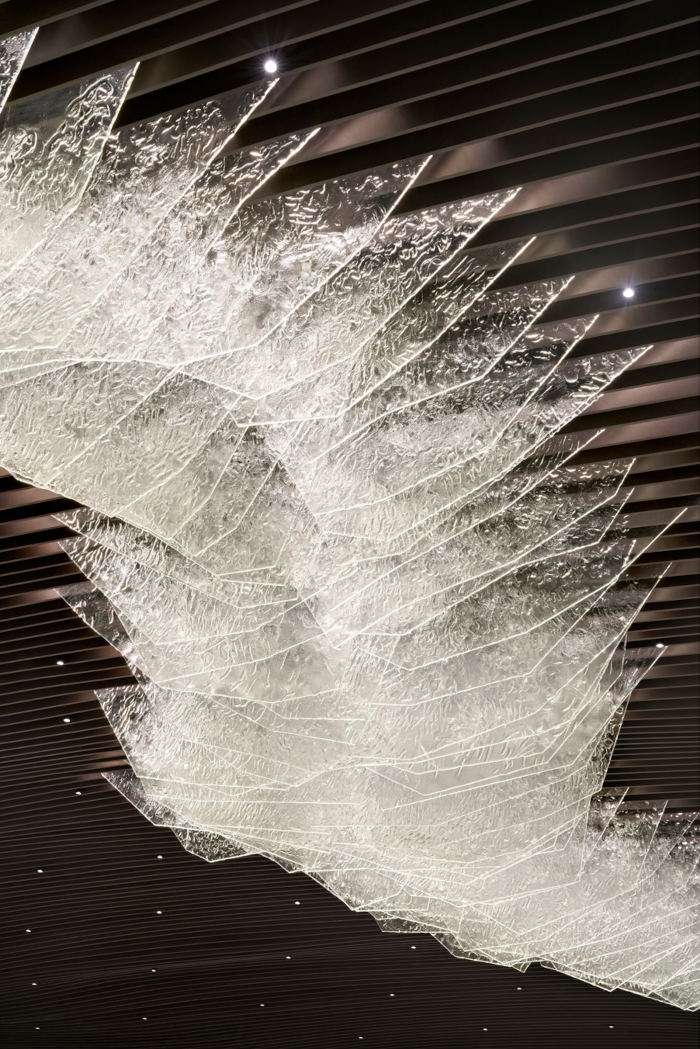 Glassmakers used flat glass sintered on an adhesive base, drilled and heat-cured. Velcovský manually created a pattern for the base into which the glass was sintered. The wooden boards differ in their length, shape and width, each of them unique, creating a wave-like effect. If the slats were stacked behind each other, they would form a line 1.2km long. The wooden slats are variously perforated, creating a grid in which the glass components are hung, so that light can pass through, highlighting the handmade nature of each glass piece.
www.lasvit.com

RATHER THAN REINVENTING the wheel, as it were, another approach is to take a fitting you already have and put lots of them together. The cluster installation of 350 P1M LED luminaires by Canadian lighting studio Archilume was part of a new lobby design for the Watt Plaza centre by Studios Architecture.

Founded in 2013, Archilume specialises in glare-free decorative luminaires and, with the P1M, developing the application of total internal reflection optics in LED fittings. The P1M is designed ‘to evoke a lit candle, poetically inverted, creating a sense of child-like wonder of where the light might be coming from’. 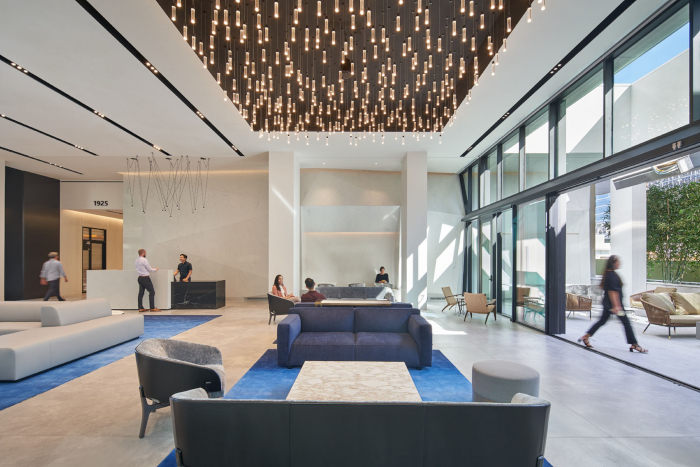 Banks Landl Lighting Design designed a template system for the overall 4.5m x 6m lighting cove area in the ceiling. This was projected from the floor, using a laser to mark each of the installation positions. Each fixture was then mounted at a different cable length. 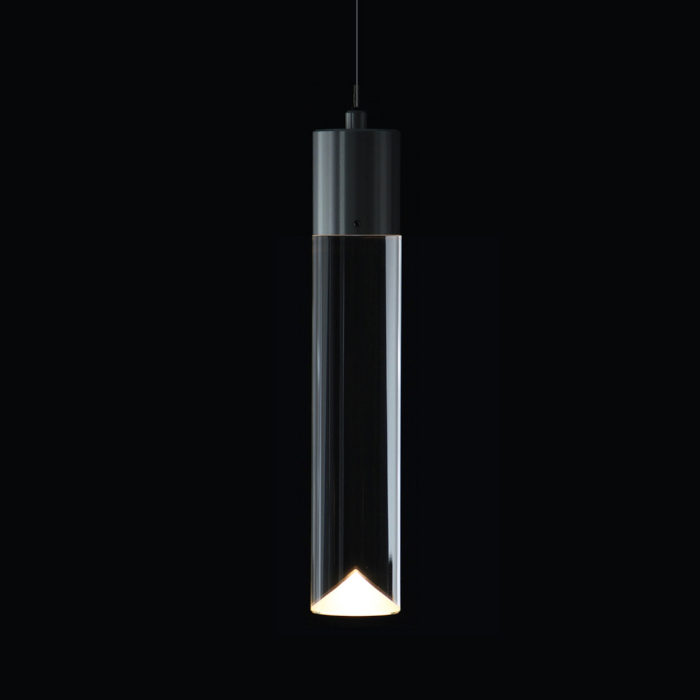 The P1M lighting design, created to evoke a lit candle and inverted to dangle from the ceiling

‘Given this component is the focal point of the lobby project, the element needed to maintain a certain, specific mass for it to carry the stature it needed to have an impact,’ says Matthew Landl of BLLD. ‘The density and scale of the installation is what makes this lighting feature successful.’ First designed in the 1980s by architect Gin Wong, Watt Plaza was the first LEED Platinum-certified high-rise office building in Century City, California, a status that needed to be maintained. The low-wattage, low-output fixtures in a large and focused quantity allowed power consumption in the surrounding connective spaces to be reduced.