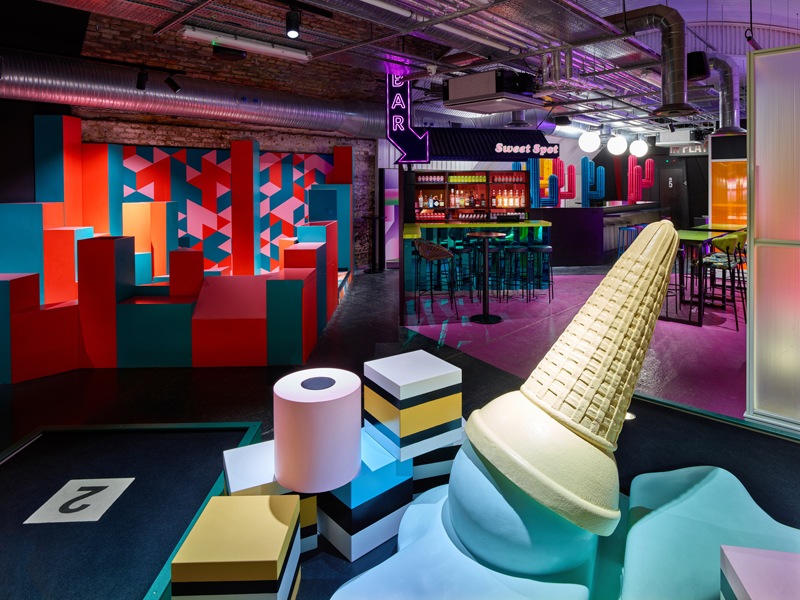 Birdies, blurring the boundaries between drinking and entertainment venue, is one of the latest manifestations of a full-throttle interior designed to catch the youthful eye

Design in some areas of the hotel, restaurant, bar and club sector has become increasingly more diverse, dramatic and occasionally downright outlandish in an attempt to create a competitive edge. Like retail, the drive has also been to counter the digital with the experiential, especially, though not exclusively, at the youthful end of the demographic scale.

In some cases, there have been attempts to offer more than just, say, a dining or conventional hospitality concept. A CNN article a few years ago cited the example of no less than four Hong Kong restaurants that combined dining with an art gallery experience, while the US 21c Museum Hotel chain, the Art Hotel in Santorini and others have pulled off a similar concept on a larger scale. More subtly, there has been a blurring of lines between the café, the bar, the restaurant and even the nightclub, with venues occasionally morphing from one to the other in order to extend hours and maximise revenues. This means that design has had to be more nimble and adaptable to different atmospheres.

First, catching the eye and then retaining the challenged attention span of potential patrons calls for novelty, colour and dynamism. And there is only so much minimalism and monochromacity that can be borne before the desire erupts to counter the constraint with colour and pattern. Light dances in these environments. When decorative hair is let down, lighting must play its part in the fun, and – because of its potential for colour and dynamism – frequently orchestrates it.

Birdies, in London’s Battersea district, with design by Shed, is a classic example of this new breed of venue.

Tucked away under the iconic Battersea Power Station train arches, it is billed as an ‘electric sports social hybrid experience’, a mash-up of ‘cocktails, fusion tacos and the craziest of crazy golf courses’. The role of lighting, and occasionally lack of it, is crucial to the design, according to Shed’s David Dalziel, partner and lead designer of Birdies.

‘As part of the overall aim to conceptualise a vibrant and visually crazy golf venue like no other, lighting played a huge part in achieving the unique immersive atmosphere,’ he says. ‘The intentionally chaotic and electrically charged environment was designed with a playful lighting approach to specific areas, holes, pockets and front bar area – whether to highlight, confuse, delight or immerse the customer, be that the player, the drinker, or, more often, both.'

‘While sometimes simple in their geometric design language, scale and illuminance go a long way to play with the spatial interpretation of spaces and holes,’ he adds. Industrial materials are juxtaposed with neon, plexiglass and bold graphics so that each hole has both an identity but also real gameplay meaning. ‘Players lose themselves in a kaleidoscope of colour, light and music,’ says Dalziel. ‘The course is intended to be a landscape of intrigue, discovery and excitement.’

The large, comic book elements and vivid, in-your-face graphics that form the golfing landscape are emphasised with strategic illumination. Each individual hole has a perimeter-skirting LED floor wash to denote the boundary of the hole itself.

On hole three (‘Hazard’), LED colour-changing battens on sequence timers were used, and also positioned behind a variety of vibrantly coloured polycarbonate wall panels providing immersive colour for players. ‘This is a play on golfing terminology interpreted with high-vis reflective chevrons and pattern graphics, coloured polycarbonate walls, floor-length yellow curtain and light-changing battens,’ explains Dalziel. ‘The combination creates by far one of the most vibrant, reflective and eye-catching elements of the overall scheme. If there was one way to play up a golfing term with light, graphics and reflective materiality it could certainly be this one.’

Hole five (‘Afraid of the Dark’), by contrast, plays with a lack of light, plunging patrons into darkness when a ball rims the hole on a missed putt. The immersive dark box experience is made edgier with a variety of surface textures and undulating floor levels. Shed wanted the bar’s lighting to bedazzle, confound and compel with a glitzy dynamism, as here at hole three of the mini golf course

Internally illuminated signage, large lightbox type and colour-flashing LED light tubes add to the energy and physicality of the space. ‘A light carnival of colour and movement,’ explains Dalziel.

For the bar area, a simple 30m run of suspended and tangled pink neon rope light adds a graphic element, and together with the softer white globe pendant lights (dimmable for changes in pace from day to night) are reflected in the rose wall mirrors and white-gloss oversized menu gantry suspended above the bar. Conventional soft accent lighting brings out the brass edge detailing to the bar and the original brickwork arch shell.

It is an unapologetic brew of colour, graphics and lighting; what Dalziel describes as a ‘spirited kaleidoscope of illumination’.