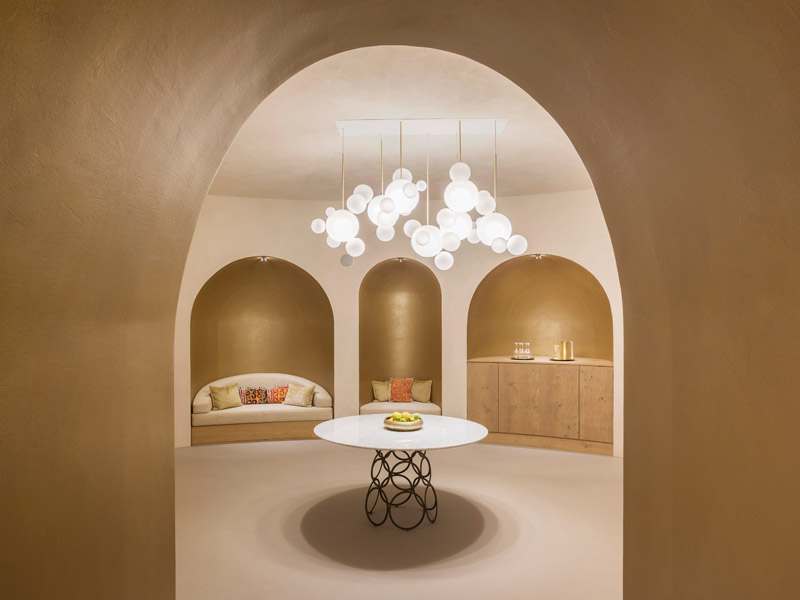 Mystras, in the foothills of Mount Taygetus on the Peloponnese peninsula, is a Unesco World Heritage Site and a former centre of Byzantine power in southern Greece. The Euphoria Retreat, an award-winning wellness hotel complex, is built into the densely forested hillside. The hotel covers around 7,350m2, with the spa at its heart, extending more than 3,000m2 over four floors. The lighting scheme has won several lighting accolades, including the LIT Award 2019 for lighting design in the Hotel and Restaurants Lighting category, and the IES Award of Excellence 2020.

The design concept reflects the holistic philosophy of the spa’s founder Marina Efraimoglou, who sees the guest on a personal journey to bring body and mind into harmony. Her approach is based on a combination of principles from Hippocratic and Chinese medicine. Five elements – water, wood, fire, earth and metal – play an important role, exemplifying the cycle of nature and life. The communal rooms and corridors of the Euphoria Retreat take design cues from Byzantine archways and contemporary lighting, with a focus on low-contrast illumination. Image Credit: Margarita Nikitaki

This understanding was expressed in the design of the hotel complex. Architectural details such as arches and domes create a link to Byzantine art, while spa areas such as the tepidarium and the hammam refer to classical bathing culture. Natural materials and an earthy palette of light and dark colours create a nuanced ambience, predicated on peace, serenity and comfort.

The synergy between architecture, interior design and lighting design was crucial, and we worked closely with the architects, designers and client to develop the lighting strategy. The goal was an ambience that visually supports the ‘transformative’ experience of the guest, while respecting the location of the hotel and the history of the place. The challenge was finding the fine balance between different considerations – from the public areas to the absolute privacy of a treatment, from openness to closeness, from dry to wet, from historical reference to high-end aesthetics, from higher floor levels with views overlooking Sparta’s oleanders to the secluded depths of the earth.

The transition between different areas and functions has been established through a consistent design approach and smart control solutions. At the same time, the balance of each individual space has been achieved through the visual clarity between vertical and horizontal luminances. The staircase in the Euphoria Retreat, where ASlight designed special luminaires to make the adaptation between floor heights more harmonious.Image Credit: Margarita Nikitaki

This made the spaces appear more ‘earthed’ or ‘airy’ according to the spatial scope and function. The discreet balance between diff used and accent lighting created the appropriate visual richness and calmness.

We looked at each room individually so that guests could journey through different lighting moods. Lighting levels were kept low; we worked with high visual contrast and, above all, used predominately warm, soft light.

Though luminaires and lighting applications were designed to evoke a certain sense of the past, the full flexibility of the latest technology was used in both the design approach and control strategy.

Each of the four levels of the spa corresponds to the individual sections of the journey undertaken by the guest. They are connected by a spiral staircase, expanding around a 20m-tall light well. At the top, it leads to the forest. At the bottom of the light well is the plunge pool used for hydrotherapy. For the night scene, an in-ground light dish, which patterns the inside of the plunge pool, hints at the moon’s reflection on water, adding visual interest and a sense of harmony. To reach the plunge pool, the guest’s path crosses through rooms with different levels of daylight, which the lighting concept had to take into account. For this purpose, we developed special luminaires that imitate daylight to make the transitions flow more evenly. The plunge pool sits at the base of the building. Image Credit: Margarita Nikitaki

The ground floor of the spa area houses the reception, consultation and changing rooms, as well as pilates and fitness studios. At entrance level is a series of carved spaces, where elliptical geometries intertwine and guide the guest through a meandering catacomb-like passage with no daylight.

To mitigate the harsh entry from daylight into the dark catacombs, the corridor and reception area are lit with 300mm-deep, tuneable white LED COB daylight tubes, specially designed and made for the project. These link with two daylight sensors for a smooth adjustment. The gold-plated niches were highlighted with warm mini wallwashers for an even distribution. A feature pendant in the reception area fills the main catacomb with soft light.

The guest continues on to the light well, around which the staircase leads to the rest of the building. This receives natural light through an upper opening. Special luminaires were also developed for the stairs, extending from wall to wall. They have up/down lighting components on independent controls, and different beam distributions in order to adapt to the varying height from one flight of stairs to the other. This way, the mystical effect is balanced throughout the route, in harmony with the daylit well. The tepidarium, decorated with mosaics, where the luminaires are subtle and the lighting low. Image Credit: Giorgos Sfakianakis

The first floor houses the main spa areas. The floor is dominated by the Sphere Pool, inspired by the architecture of the Hagia Sophia in Istanbul, and characterised, as its name suggests, by spherical shapes. It is illuminated from above and below, and highlights the four perimeter openings.

The 1.5m-deep skylight that allows daylight in from above is supplemented in the evening hours by a cylindrical lightbox, integrated into the architecture. It lets natural and also diffuse artificial light into the sphere pool. To achieve this, neutral white (4,000K) LED strips were arranged in a gradient pitch on an aluminium cylinder for optimum light distribution, while the plexiglass diffuser cylinder spreads the light into the skylight shaft.

The optical effect of water waves on the surface of the dome is achieved by four high-output spotlights, also 4,000K, which are aimed at a large custom parabolic reflector that generates a ‘light column’ through the bottom glass of the pool and the water.

The perimeter nooks at the edge of the pool have hydrotherapy nozzles and underwater benches. In contrast to the cool blue of the pool sphere, these are set in gold. Here, the lighting is discreet and atmospheric thanks to warm tones (2,500K) and low-level linear lighting integrated in small sections. Fibre optic lighting is diffused in the steam room to allow for privacy on the perimeter benches. Image Credit: Giorgos Sfakianakis

On the same level, there is also the tepidarium, the hammam and other wellness facilities such as the sauna and steam room, which continue in a similar way on the next floor. The tepidarium walls are covered with mosaic tiles and recliners with a colour palette that sits between grey, sand and brown. Flexible 3,000K LED luminaires are used in the perimeter cove to light the wall surfaces in order to achieve an apparent brightness while keeping the actual light levels low.

The architecture of the hammam is based on traditional Byzantine baths. Above the central treatment podium, there are tubular lights with frosted glass diffusers in the ceiling, which work with a fibre optic system using 2,700K and 4,000K projectors. A similar fibre optic system was also used for the steam room, concentrating the light in the centre of the space, and allowing the perimeter relaxing bench some ‘privacy’. The surrounding rest areas of the hammam are characterised by a soft, indirect light.

For special therapy areas such as the sauna or the salt room, we relied on vertical lighting, integrated into the architecture and interior details, accompanied by discreet highlights. Another wellness room, with lighting designed to ease and relax guests into a paradisical bliss. Image Credit: Giorgos Sfakianakis

The guest reaches the climax of the transformative journey on the top floor, in the yoga and meditation rooms, where a panoramic view of the valley opens up. The visitor changes from the microcosm designed with light back to the sun or the night sky of nature.

The lighting design for the Euphoria Retreat also includes the suites, the front of house areas, the Gaia restaurant and the surrounding landscape, including the street lighting in front of the complex. A total of 12 special luminaires were created by the lighting team to realise the design concept for all client areas, both aesthetically and technically – down to the last detail.

Low levels of illumination, tone contrast and detailing integrated seamlessly with the architecture characterise the scheme throughout. Light, and the design and manipulation of it, is a silent protagonist that hides and reveals elements, draws guests to one area or another, and plays with human senses.