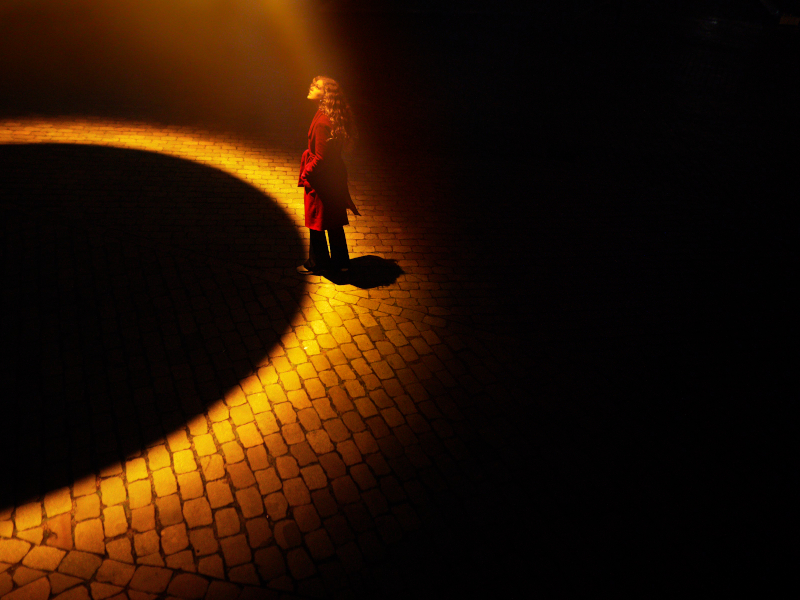 The sun is a powerful symbol. It is the source of light and heat and, therefore, life on earth. Its healing and even hygienic properties have been known for millennia, promulgated by the ancient Greeks and Romans, among many others, and by the likes of Florence Nightingale (who, sadly, with her ‘lady with the lamp’ sobriquet, has become more associated with artificial than natural light). 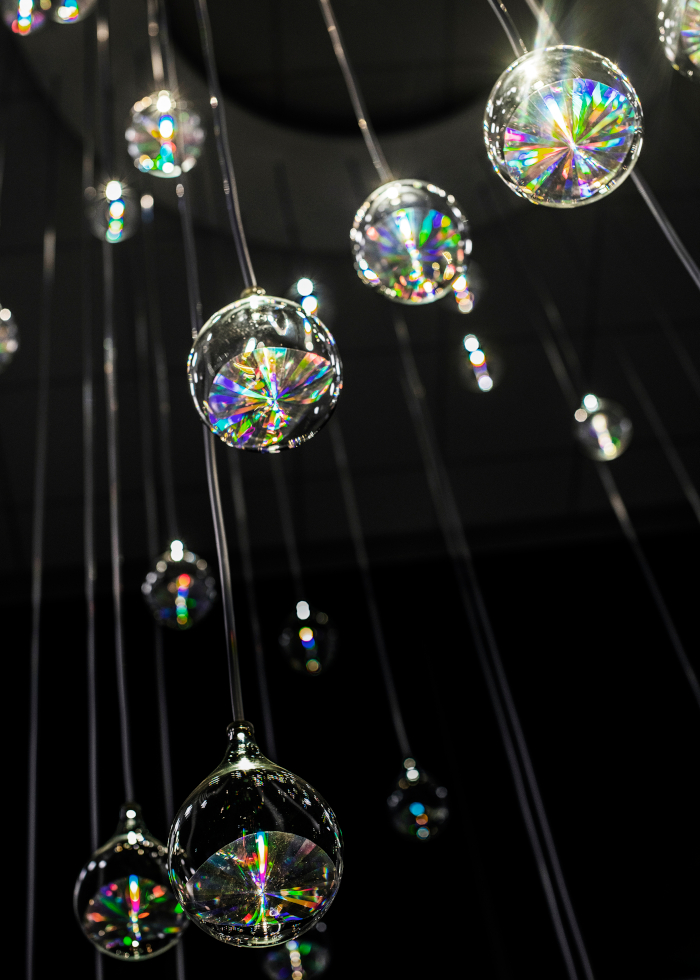 Sunlight also has its playful side: the reflection, refraction, shadowing and dappling that is so pleasing to the human eye. When Newton split white light into its prismatic rainbow, he revealed the complexity of colour that lies within a sunbeam. The meeting of science and art.

Two of the following three artists explore the relationship between sunlight and colour, the infinite patterns and chromatic possibilities that occur when light interacts with glass. Daan Roosegaarde, meanwhile, looks to the healing properties of the sun, with an artwork created for the time of Covid-19.

Dutch artist and innovator Daan Roosegaarde, founder of Studio Roosegaarde, which he describes as a social design lab, is known for his large-scale artistic interventions. His work combines art and science to address environmental concerns. Among his more notable projects was Waterlicht, a well-travelled installation that evoked the power of water through light, and Smart Highway, where road markings are charged by the sun and glow at night. 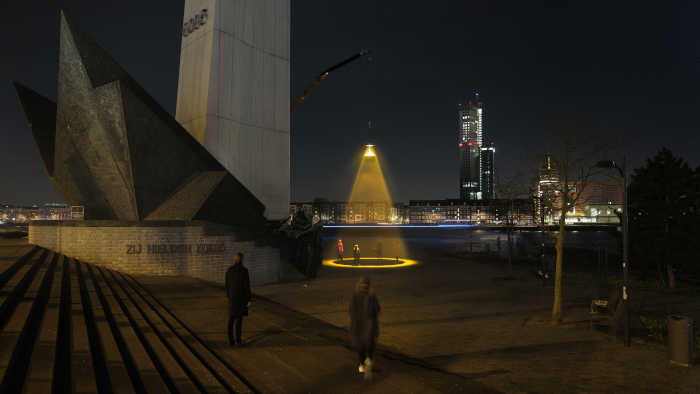 Urban Sun has the ambitious aim of cleaning public spaces of Covid-19. It is based on the use of UV light, which is currently used in existing luminaires for clean environments such as hospitals. Roosegaarde argues that while traditional 254Nm UV light is harmful – it has been found to be carcinogenic and cataractogenic – far-UVC light, with a wavelength of 222Nm, sanitises viruses safely. 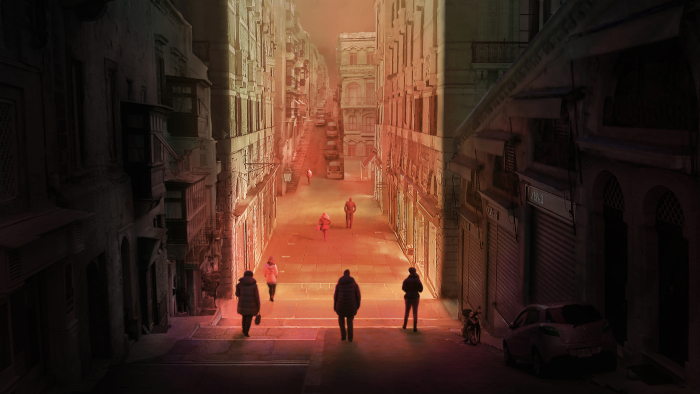 The use of the different types of UV light for this purpose is still subject to study and discussions over safe application, but the Urban Sun project is supported by international researchers and experts, says Roosegaarde, and is based on scientific papers written at Columbia University and Hiroshima University. The Urban Sun far-UVC light source is measured and calibrated by the Dutch National Metrology Institute, VSL, and meets the International Commission on Non-Ionising Radiation Protection (ICNIRP) safety standards. 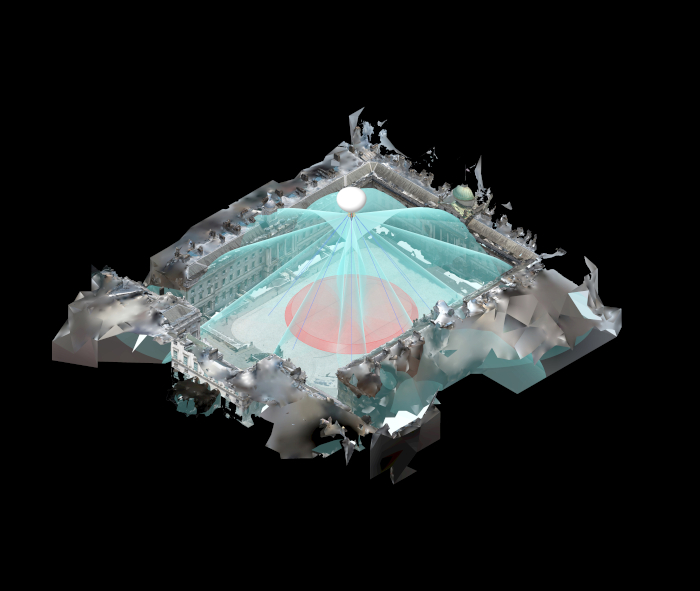 The aim of the project, which began in 2019, is not only sanitation but to be a symbol of hope, a literal light in the darkness where people may gather. ‘The Covid-19 pandemic made the project much more urgent,’ says Roosegaarde. ‘Urban Sun connects design with science to provide innovative solutions to create spaces for people to meet and exchange in a safer and more humane way. It can be exhibited in any type of public space, and serves as a call to action to governments and partners to speed up and upscale applications.’
studioroosegaarde.net/project/urban-sun

Connecting the seven districts of London’s Greenwich Peninsula, The Tide will form a 5km-long elevated pathway that runs from Peninsula Square to the river, then and along the riverside. It will be home to a public art trail that features both emerging and world-renowned artists, including Damien Hirst, Allen Jones and Morag Myerscough. 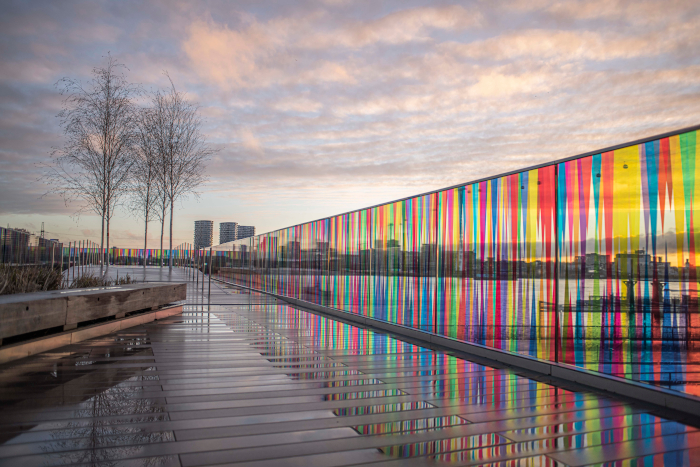 Commissioned by Greenwich Peninsula for the project, artist Liz West has created Hundreds and Thousands, a temporary site-specific artwork that wraps 700m of the walkway’s glass balustrades, creating a ribbon of undulating colour. The installation will reflect the subtle nuances of light in the riverside location as the seasons transition.

The work pays homage to the site’s geography and proximity to the Greenwich Meridian Line by behaving as a sundial, allowing people to see the changing light, depending on the time of day and season. Selected colours and repeated visuals have been used to augment and enhance the space and visitor experience, and the intricate design allows people a fluid and ever-changing experience.

‘This work aims to create a new space for exploration and discovery’ she continues. ‘It depicts and symbolises a physical and metaphorical meeting point of both colours and people. Covering all the glass panels of The Tide, this immersive installation helps join together the different paths across the space. 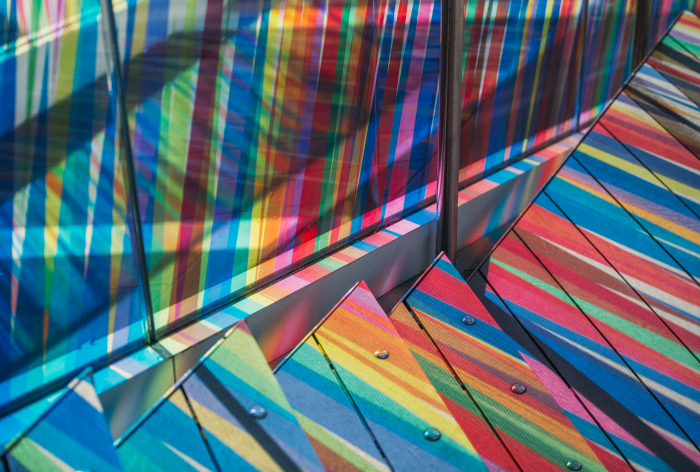 ‘The luminous multicoloured stripes, collectively, become a rhythmic cacophony of colours, creating a mesmerising mass when viewed from all angles. The work appears to change and morph as you journey around the space. The work encourages you to follow the work around, with different perspectives offering intriguing colourways and kaleidoscopic visuals.’

West is known for her vivid artscapes and installations, which mix luminous colour and radiant light, and are designed ‘to provoke a heightened sensory awareness in the viewer’, she says. Her interest lies in exploring how sensory phenomena can invoke psychological and physical responses that tap into our deeply entrenched relationships to colour. ‘Our understanding of colour can only be realised through the presence of light,’ she affirms.
liz-west.com

In her artwork for the atrium of Rowan View Hospital, a new £53m mental health facility in Maghull, Merseyside, visual artist Jessica Lloyd-Jones has exploited the prism effect to create a site-specific sensory installation.

Sun Catcher comprises 49 blown-glass ‘raindrops’ suspended from the ceiling at different heights. Created in collaboration with technical glass-blowers and lighting specialists, each raindrop has been produced using light-diffracting optics. As natural sunlight refracts in the raindrops, it floods the atrium and nearby offices with rainbow colours. 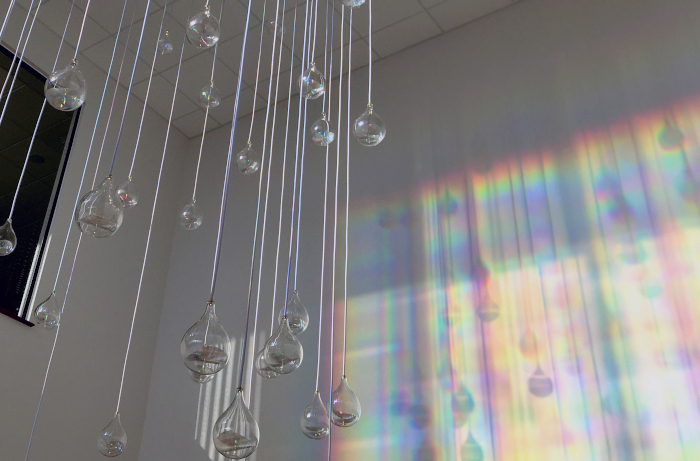 The aim was to create a calming sense of movement and warmth as light changes throughout the day and in response to each season, generating a relaxing environment for staff, visitors and service users based at the facility. 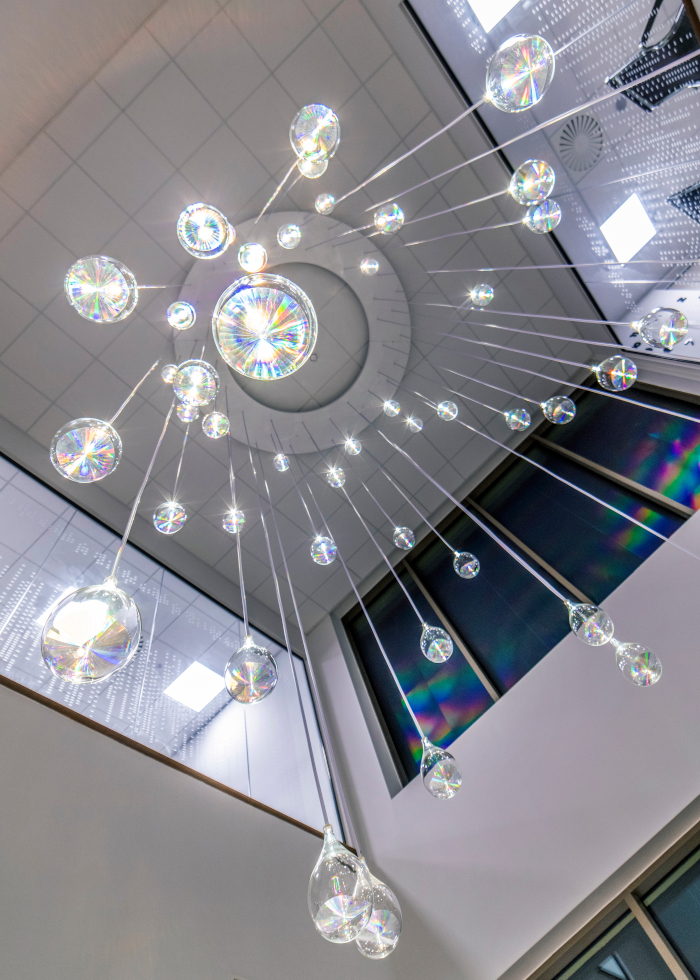 Combining art, science and technology – she collaborates with specialists in varying fields of scientific research, as well as architects and design teams – Lloyd-Jones is concerned with digital projection, installation and sculpture, working with a variety of sustainable materials and processes. 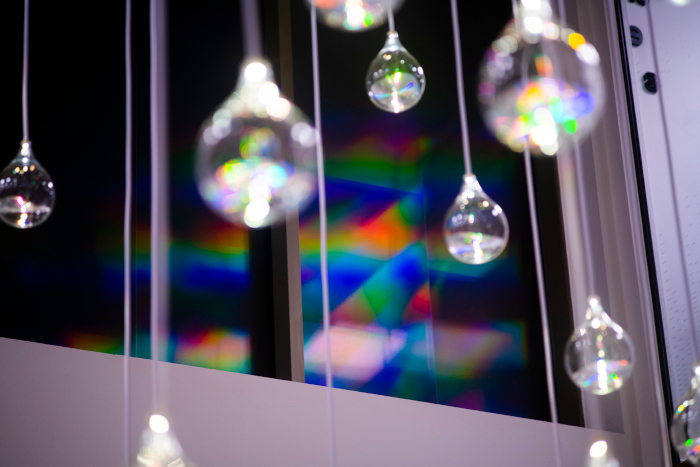 Her research into the scientific and the natural world is her source of inspiration, she says, and much of her work explores energy and natural phenomena through the experimental application of materials and light, using ‘illumination, colour and optical effects to evoke sensory experiences’.
jessicalloydjones.com