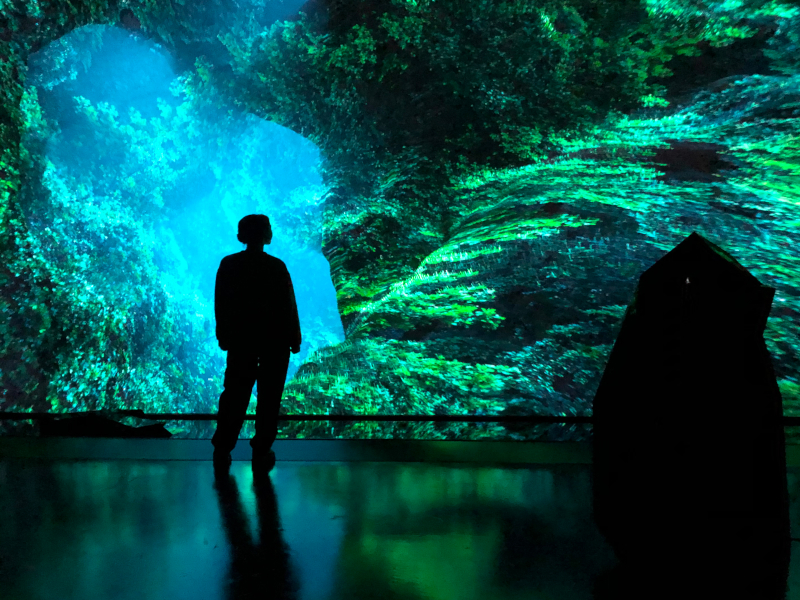 Light installations represent an exciting new frontier in art, with the boundaries of lighting innovation being pushed by gallery spaces and artist collectives alike. By Jill Entwistle

Sophisticated techniques and technologies such as projection mapping have long been a feature of light festivals, exhibitions and shows (Pink Floyd’s The Wall being an early and classic example), and are now finding more permanent expression. While they are multimedia audiovisual installations, lighting is generally central to these immersive experiences, which can involve 360° projection, backlighting, refraction and reflection, and lighting tools such as lasers and LEDs. Last August, Amsterdam, the home of the Rijksmuseum and Van Gogh Museum, saw the opening of just such a next-generation art gallery. The Nxt Museum is the first space in the Netherlands dedicated to what it describes as ‘new media art’. Meanwhile, in France – also last year – Culturespaces opened what is billed as the largest digital art centre in the world: Les Bassins de Lumières, located in a former submarine base in Bordeaux.

There is a mix introducing innovative new installations and, especially in the case of the French Culturespaces venues (this is its third and largest in France), redefining our perception of familiar, traditional artworks, allowing viewers effectively to step inside the world of paintings, observing the minutiae of brushstrokes, lines and material effects.

Currently, this is largely in the realm of art and entertainment, but the immersive experience has implications for future interiors. Static backlit elements have featured in commercial interiors for years, and dynamic versions are increasingly common as a way of cheering up, say, an otherwise tedious patch of airport (Daan Roosegaarde’s Beyond at Schiphol Airport, where a special printing technique creates the illusion of dynamism), or, in the case of CaixaBank’s new All in One flagship offices in Barcelona, providing bucolic views on three floors where LED screens project landscape imagery.

Just as those monstrous animated Blade Runner-esque billboards became a reality only a few years afterwards, the animated, mutable interior is already with us. Companies such as teamLab have demonstrated this with installations like the Waso Tea House (a promotional venture for cosmetics company Shiseido) and one of its latest projects, Reconnect, which, unlikely as it sounds, is an exhibition that combines art and sauna.

These and other digital creations are inspirational, powerful, often positively trippy, and redefining our apprehension of light, dark, space and reality. The doors of perception indeed.

Located in the cultural hub of Amsterdam- Noord, a redeveloped wharf area, the Nxt Museum has a threefold programme of exhibitions, performances and learning and research. Its 1,400m2 exhibition space includes two regularly rotating spaces: Nxt Lab is a dynamic area for education, research and development, and home to the artist residency programme, while Nxt Stage provides a platform for innovative performances and audiovisual art.

The inaugural event was ‘Shifting Proximities’, which aptly examined how human experience and interaction are affected by social and technological change. It featured eight large-scale, multisensory, multidisciplinary art installations, four commissioned by and premiered at the museum. This image Two of the key founding principles of Amsterdam’s Nxt Museum are its multisensory and multidisciplinary approach. Image Credit: MARSHMALLOW LASER FEAST

Each was created in collaboration with local and international artists, designers, technologists, scientists and musicians, ‘fusing creative ideas with pioneering academic research and technological innovation’. Among the participants was London-based art practice United Visual Artists (UVA), long familiar to the UK lighting community, which created one of the newly commissioned works, Topologies #1.

‘Living in London, a hub for innovation and home to some of the world’s most forward-looking art institutions,’ explains Merel van Helsdingen, founder and managing director of the museum, ‘inspired me to create a new space to champion the incredible art being produced today with groundbreaking tools. The Netherlands has a long tradition of leading developments in the art world, and Nxt Museum has been created in this spirit. Our multisensory exhibitions are designed to shift not only our visitors’ experience of art, but to inspire new understandings of the world around them and their place within it.’
nxtmuseum.com

Founded in 1990, Culturespaces is a private operator in managing monuments, museums and art centres around the world. Since 2012, it has become a pioneer in the creation of digital art centres and digital immersive exhibits. Les Bassins de Lumières joins the organisation’s two other French digital art centres, but has a surface area three times the size of the Carrières de Lumières in Les Baux-de-Provence, and five times the Atelier des Lumières in Paris. Like its smaller forerunners, this latest venue from Culturespaces will present monumental immersive digital exhibitions of major artists. With 12,000m2 of projection surface and 3,000m2 of itinerary floor space, the huge expanse of the former submarine base matches the ambitious scale of these exhibitions. This is further enhanced by the reflective possibilities of four enormous water basins, each 110m long, 22m wide and 12m deep – a total surface area of 13,000m2. Visitors will move through the space on gangways above the water and along the quays of the enormous basins. A total of 90 video projectors and 80 speakers are used to create the experience.

While the emphasis is on literally displaying old works in a new light, a space called Le Cube will be devoted to contemporary artists that specialise in immersive art. It will present works by established and up-and-coming digital artists.

An art collective formed in 2001, Tokyo-based teamLab is an interdisciplinary creative group that brings together professionals from various digital fields: artists, programmers, engineers, CG animators, mathematicians, architects, web and print graphic designers, and editors. They call themselves ‘ultratechnologists’, with an agenda ‘to go beyond the boundaries between art, science, technology and creativity, through co-creative activities’. While it does work on collective principles, there is little doubt the creative force behind the project comes from founder and CEO Toshiyuki Inoko. teamLab, a creative collective based in Japan, creates stunning lightworks, inducing wonder from every age group

The group’s work is in permanent collections around the world, with widespread international representation by Pace Gallery. Its creations are often characterised by rich natural imagery, what it describes as ‘digitised nature’, and its ethos is based on making people more aware of their connection to the natural world. One of its most ambitious works to date – four years in the making – was a large outdoor collection of art installations entitled A Forest Where Gods Live (2017). They were scattered through Mifuneyama Rakuen, a 500,000m2 garden in Takeo, Japan. its Universe Inside A Teacup, light flowers blooming

‘When we’re in the city, we think we’re leading an independent existence,’ Inoko told the Japan Times in 2017. ‘But in reality, life has been around for at least four billion years. And even though humans have been around for a very long time, it’s hard for us to fathom that awareness that we are a part of nature.’

Its recent and forthcoming projects include teamLab Forest, a new museum in Fukuoka, and, together with Es Devlin and James Turrell, dynamic, large-scale installations for an inaugural group exhibition called Every Wall is a Door at the new experiential art centre, Superblue Miami in Florida. Perhaps its most extraordinary proposition to date is the planned teamLab Reconnect, a new art and sauna exhibition ‘where visitors experience art in their finest mental state’ – the so-called sauna trance. ‘Scientifically speaking,’ according to teamLab, ‘sauna trance is an exceptionally unique neurological state brought about by alternating hot and cold baths – repeated exposure to saunas, cold water and rest. When entering a sauna trance, the senses sharpen, the mind clears, [and] the beauty of the surrounding world comes into focus.’ teamLab’s Levitation, where a large sphere reacts to touch and interference before returning suspended between floor and ceiling

Several pieces will be on view at Reconnect, including a new group of works based on teamLab’s new art project, ‘Supernature Phenomena’, a project that focuses on occurrences that transcend the laws of nature and result in changes in perception. One such work is Levitation, which features a sphere levitating in the space between the floor and ceiling, floating up and down as through defying the concept of mass and gravity. The sphere falls to the ground and rolls away when people hit or impact it. But if there is no external interference, it will slowly rise into the air again, as though restoring itself to an original state.

‘When a person views ‘Supernature Phenomena’, such as the defiance of universal gravitation, this causes their perception to change, thus leading to a new cognitive experience that differs from that of everyday life,’ teamLab said in support of the installation’s unveiling.

‘[Works by teamLab] might not fit into the traditional definition of artwork,’ the group’s Singapore gallerist, Ikkan Sanada, said in that same Japan Times article, ‘but it was the same thing when photography was introduced or video art was introduced. Ten years from now, people will recognse that what teamLab was creating was a new field of artistic expression, which is “digital art”.’
team-lab.net