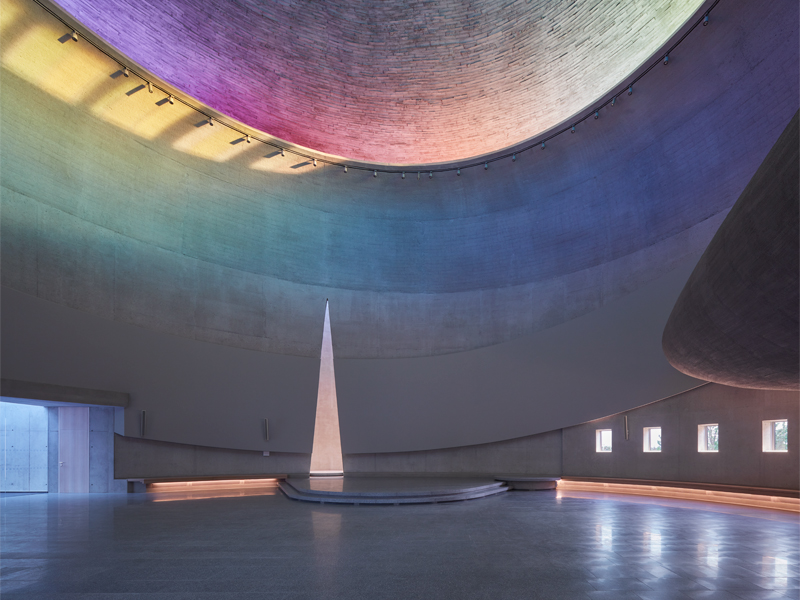 There is a particular alchemy in the meeting of light and surface. Both are transmuted according to texture, colour and reflectivity. Both can be modified individually – the light diffused, tinted, directed; the surface coloured, roughened or refined – to change the nature of the encounter. The following projects examine that relationship. All, interestingly, feature curved planes, a further factor in their reception of the light.

Two of the projects, literally concrete examples, illustrate how creatively natural light can be used, how its interaction with interior spaces and surfaces becomes part of the fabric of the design while the two elements remain separate. The UCCA Dune Art Museum, which was shortlisted for the 2020 Beazley Designs of the Year Award, is the simplest with its pure, primal white structure. While the Brno-Lesná church is more complex and nuanced, exploiting in a contemporary way the age-old pairing of stained glass and sacred environments.

The second project, a whisky bar, which features primarily artificial light with an element of natural light, is a perfect example of how surface texture and light can become fused into one. A skylight in the Dune Museum, an avenue for natural light to enter and the portal through which observers can witness the changing expression of the sky. Image Credit: Wu Qingshan

A structure that is as much eco statement as art space, the 930sq m museum is carved into a dune several metres high along a quiet beach in Qinhuangdao on China’s north-east coast. Commissioned by the Ullens Centre for Contemporary Art (UCCA) — China’s leading independent institution of contemporary art – it is largely enveloped by the dune, its interconnected, organic cave-like structure recalling primal human habitation and the first works of art.

Aside from this reference, the decision to create the museum underneath the dune also arose from the architects’ desire to respect nature and to protect the vulnerable dune ecosystem, formed over thousands of years. As a result of the museum, the surrounding sand dunes will be preserved and avoid the fate of others along the shore, which have been levelled to make space for ocean-view real estate developments.

The interior spaces, which include 10 galleries and a cafe, are punctuated by openings throughout the building, each with a different orientation and size. These skylights work both to bring natural light in and to allow visitors contact with and views of the outside environment. Rather like informal versions of James Turrell’s Skyspaces, they frame the changing expressions of the sea and sky throughout the day, and also provide natural lighting for the museum’s spaces year round. A skylight in the Dune Museum, an avenue for natural light to enter and the portal through which observers can witness the changing expression of the sky. Image Credit: Wu Qingshan

The galleries vary in size, the largest, multifunctional space having the most dramatic approach. After passing through a long, dark tunnel and a small reception area, the space suddenly opens up to visitors, a beam of daylight from the opening above powerfully illuminating the space.

The building’s concrete shell was shaped by hand by local workers (some former shipbuilders), using formwork made from small linear strips of wood and other materials. Open Architecture deliberately retained the irregular, imperfect texture left by the formwork, allowing traces of the building’s manual construction to be appreciated.

The rough, matt finish of the white interiors softens and diffuses the natural light. The deep-set nature of the skylights negates any glare, allowing the light to wash their sides and cast pools of light on walls and floor, according to their positioning and time of day. Chengdu, capital of Sichuan province, has 7.8 million inhabitants and a lot of bars. In fact, the proliferation of new bars, hotels, restaurants and retail outlets combined with a burgeoning creative and cultural scene, prompted Architectural Digest to run an article a couple of years ago on why design lovers should go there. The competitive milieu demands powerful design concepts, of which Inns Whisky Bar is one of the latest. Winner of a Restaurant and Bar Design Award in 2020, its interior is almost an immersion in the product it is serving. The small (150m2) space is an artistic homage to whisky. The lighting is reminiscent of water patterns, bequeathing to its patrons a mystical glow. Image Credit: Ringin’ Studio

Wooton took its design and colour inspiration from the distilling process, shaping the amber-coloured walls and ceiling to suggest the inside of a copper still. The reflectivity of metallised surfaces can be a double-edged sword where lighting is concerned. Highly specular surfaces can cause glare and unwanted reflections, but here the deep burnished texture and copper colour are a gift, creating a warm, gleaming finish when the subtle lighting falls on it. Light fittings are discrete, small downlights for functional illumination, and strategically positioned miniature spotlights highlight the texture of the surfaces and create a varied light pattern. Simple black circular fittings provide penumbral light to the walls. The church initially seems austere for a Catholic place of worship, until the observer looks up to see the play of dynamic, multicoloured light across the concrete walls. That arrives via stained-glass windows, wrapped 360° around the building top Image Credit: Boysplaynice

Located unpromisingly in the heart of a housing estate of tall concrete apartment buildings, the new Catholic Church of Beatified Restituta is designed along simple lines using basic geometric shapes. Standing alongside an existing rectangular-shaped spiritual centre, the 31m-high tower is triangular and the church circular, referencing the symbol of heaven and eternity.

Inside the church is a revelation. Paradoxically, there is a puritan spartanism with exposed concrete walls left bare. But they are a canvas for the daylight, which filters through an 80m-long, rainbow-coloured stained-glass window wrapping around the top of the concrete drum. A little reminiscent of Olafur Eliasson’s installation for ARoS in Aarhus, it paints the interior with subtle, changing watercolour shades, the patterns and hues shifting according to the time of day, calmed and muted by the absorptive surface of the concrete.

The annular window that creates the effect is located just below the roof, hidden behind a wide ledge. The source of the light is strategically veiled, suggesting the mysterious and the divine. The colours evoke the Biblical post-diluvian covenant of the rainbow. ‘A circular rainbow is a phenomenon that can actually be observed from high altitudes, often from planes,’ said architect Štepan Marek. ‘The light is turned into an element that hints of something beyond the limits of material reality, something barely perceivable with our senses.’