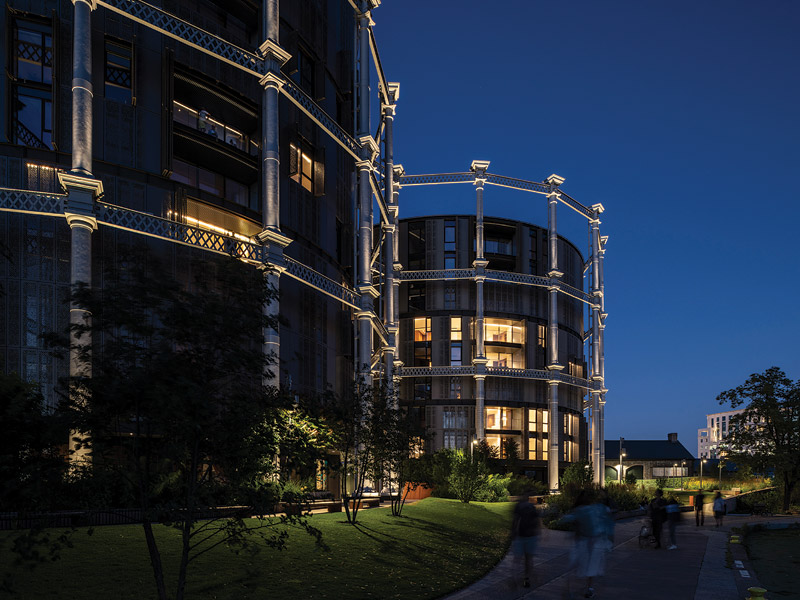 In a field of excellent projects, Speirs + Major’s FX award-winning scheme for Gasholders London goes way beyond just good lighting. It’s an exemplar of the roles that lighting can play in addition to simple illumination. Here it underlines the architectural concept so that design and lighting are both singing from the same hymn sheet, integral to the ambience and appearance of the structures. The use of very warm colour temperatures in certain areas even evoke gaslight and reference heritage. It shows the part that lighting can play in creating atmosphere, humanising the potentially harsh industrial nature of the surroundings.

Meanwhile winner of the Best Lighting Product category – RISE by Ecosense Lighting – is a refreshing example of design that starts from the viewpoint of the lighting specifier, addressing what they actually need from a luminaire in a whole range of applications.

A gasholder doesn’t seem an ideal starting point for a luxury residential development. However several unlikely elements of London’s 27-hectare King’s Cross regeneration area have proved fruitful in forging a 21st-century lifestyle out of an unpromising Victorian industrial landscape.

The telescopic gasholder was invented in 1824 and provided the storage needed to meet the demand of an ever-expanding city. These interlocking gasholder triplets were originally built and revised between 1860 and 1880. With exposed iron frames, they were a peculiarly British example of infrastructure type.

Refurbished by Yorkshire-based Shepley Engineers, and relocated to their current position beside the Regent’s Canal, they have emerged some 150 years later as a RIBA Award-winning scheme comprising 145 apartments set within the three linked gasholder guide frames.

The circular aspect of the gasholders inspired architect Wilkinson Eyre to arrange the apartments around three atria, flooded with light from skylights above. ‘We wanted every aspect to be unexpected, so even if you’re in the roof garden, looking down inside, you’ll see something interesting,’ says associate Jeff Lee, ‘The pool of water in the central courtyard between the three gasholder frames is designed to reflect the point where the structures meet.’

On a holistic level, the interior lighting is designed to augment the experience of looking up and through the atria in each of the three buildings. ‘A view to the sky is of prime importance, and a simple wash of light to the circular walls promotes this by supplementing and balancing the available natural light,’ says Speirs +Major principal Mark Major.

The light source, positioned in a concealed cove detail, is completely hidden from view both when looking up or across the circular balconies. The lighting is also programmed to respond to the changing quality of natural light over the day, shifting in colour temperature from the morning to the afternoon and into the evening, preserving the softly daylit appearance. 'An examplar of precision, attention to detail and integration' Image Credit: James Newton

At night, the glass dome and structure above each individual atrium are deliberately left dark, transforming the skylight into a mirror that reflects the atrium back on itself. ‘Standing in the centre of the circular space, looking up, the effect is an awe-inspiring kaleidoscope of circular patterns and reflections,’ says Major.

The diffuse quality of the lighting in the atria is punctuated by an element of sparkle from the cylindrical entrance light on each apartment, also adding a domestic touch. The shape echoes the form of the building, while the combination of the light source and the internally frosted, fluted diffuser adds warmth and depth to the light quality, complementing the golden exterior cladding.

Viewed from above, the lighting details at ground level provide definition. The linear lighting beneath the wedge-shaped landscape elements underlines their form, which is designed to suggest a clock mechanism, reflecting WilkinsonEyre’s concept of the buildings as an intricate and enduring timepiece.

The lighting throughout often plays a key role in softening the overall industrial aesthetic, creating an atmosphere of warmth and intimacy. The bespoke individual lanterns set within the soft landscaping at ground level bring a sense of personal light at a relatable scale. Made from fluted glass and copper mesh with a very warm indirect light source, the quality of the light they emit is reminiscent of gas heaters. This evokes a cosy ambience that encourages residents to linger nearby, while also referencing the gas that was once contained in the frame.

The exterior lighting scheme is also meticulously choreographed to soften and delineate the beauty of the heritage framework while avoiding light spill on to the apartments within. Warm light is grazed up the front face of each of the light grey gasholder columns, highlighting the detail in the structures. Unobtrusive custom-designed floodlights control the light so that the interior building is only animated by light coming from inside the apartments. The central space that connects the three buildings is deliberately the brightest element in the tableau, appearing as the source of light itself. Viewed from further back, the warm positively lit frames sit in dramatic counterpoint to the adjacent Gasholder Park – also lit by Speirs + Major – the silhouette of its dark frame revealed internally in cool white light.

Each gasholder features a roof garden which sits within the circular frame. Custom lanterns, the same design as those used in the atria, are positioned on the ground and at tables to reinforce the sense of a snug retreat in the city. The lanterns encourage residents to get close up to the warm light, while the low levels overall make it possible to appreciate the views of the London skyline beyond.

The FX Awards Judges Said
‘An exemplar of precision, attention to detail and integration’

Apartment entrance lighting The cylindrical wall-mounted lanterns have a bespoke paper diffusing film behind the clear acrylic tube. In this way, the light is fully diffused while maintaining the glossy surface of the material. The lanterns are also fitted with an internal colour correction film to achieve a warmer colour temperature of < 2400K. Product: Tube, made by Optelma

Pentagonal Portal and The Experience Tunnel
by Jason Bruges Studio

Billed as the world’s most compact floodlight, the Ecosense Rise range is designed for scalability and to be easily configured. According to the company it is twice as powerful as the market average, and can light one single object or be aimed separately to illuminate multiple elements. An extensive range of beam angles allows it to be used for spot, accent, landscape and floodlight applications. The tight five-degree beam option enables a sharp focus with no light spill. The fixture also features the company’s Macro Lock system for easy one-touch aiming.