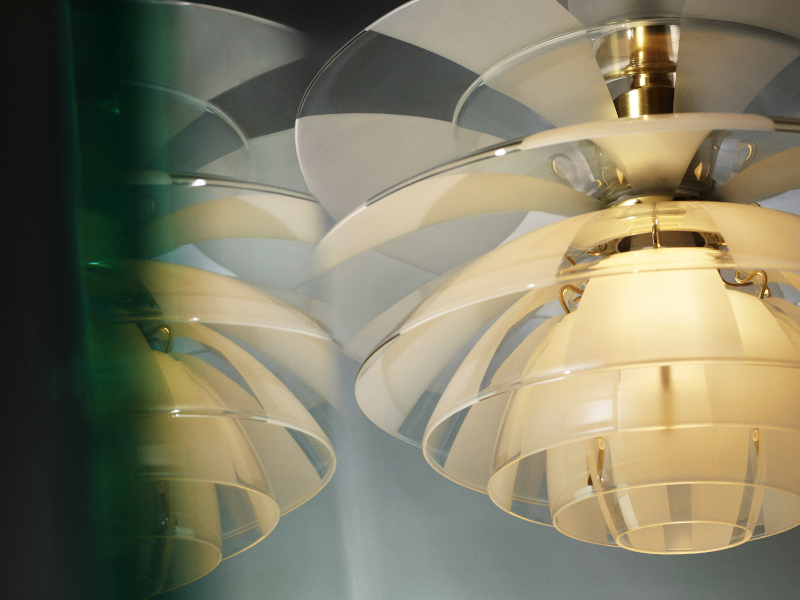 The storied Danish tradition of functional, elegant lighting has been respectfully and impressively recast by contemporaries for the 21st century

Any follower of Scandi noir, and certainly those who are a tad anoraky about lighting, will have spotted the ubiquitous classic Danish-designed light fittings that crop up in the interior scenes of just about every TV series. Like any good classic, they could, by definition, have been designed yesterday. Some even date back to the 1920s.

Television aside, many Scandinavian fittings endure because of their clean-lined contemporaneity. Significantly, the legacy of Danish masters – such as Poul Henningsen – prove that great lighting is timeless. 20th century figures continue to define the very essence of good lighting design.

And, as these three recent introductions to the light market show, the custodians of that Danish lineage have updated, refreshed and reinvigorated those classic designs to ensure their longevity. Multi-Lite is one of those luminaires that proves how delightfully mid-century Scandinavian designers understood the art of controlling light.

The 1972 Multi-Lite Collection by Louis Weisdorf features two configurable fittings comprising a metal ring, two concentric cylinders and a pair of rotating quarter-sphere shades. Simply adjusting the shades transforms the light, enabling it to be directed upwards, downwards or in asymmetric beams. The collection of pendants, floor lamps and table lamps, available in brass, chrome and a range of curated colours, has now been joined by an additional pendant in black brass. It comes in two sizes, large (32cm in diameter) and small (25.5cm in diameter). Weisdorf, born in 1932 (and dying earlier this year), was a well-known Danish architect and designer. One of the youngest designers to graduate from the Royal Danish Academy of Fine Arts in Copenhagen in 1954, he was a multidisciplinary creative force working in graphic, interior, architectural and industrial design. He described himself as a specialist in versatility.

In 1961, he started a ten-year assignment at Copenhagen’s Tivoli Gardens, working as assistant to the chief architect Simon P Henningsen (son of Poul). There he made his first venture into lighting design with the Konkylie (conch) Lamp in 1964. The anodised gold light featured vertical concentric slats and, until recently, hung from trees throughout Tivoli Gardens. Despite worries that it would be impractical to make on a commercial scale, it was also put into production. And to success.

Weisdorf founded his own architectural firm in 1967 in Copenhagen, sharing the premises with architect Ole Panton, and working closely with Verner Panton – younger brother of Ole – and Poul Henningsen. The latter’s influence is clear in Weisdorf’s continued exploration of ways to direct light, especially using uniform slats, a simple design principle that allows the appearance to vary depending on the colour and positioning of the slats, while shielding the eye from direct glare from all angles. One of his most notable designs was the spherical Turbo Pendant from 1967, which was awarded the iF Design Award.

The Multi-Lite collection reflects Weisdorf’s passion for objects that could be changed by the user, involving them in the design process and offering a more dynamic design. Or, as Weisdorf put it, ‘It’s a bit more complex.’
gubi.com

The PH Septima, which Louis Poulsen (LP) reintroduced with minor modifications towards the end of last year, is regarded as one of Poul Henningsen’s most refined pendants, and recognised as a precursor of the iconic (adjective used advisedly) PH Artichoke. Designed by Henningsen between 1927–31, the distinctive seven-shade glass pendant has alternating clear and frosted sections of fine but robust Italian borosilicate glass. The glass shades are positioned so that the frosted sections cover the clear sections underneath, allowing the layers to spread the light in a softer way, while creating glare-free, downward-directed light distribution. The result is a diffuse and delicate light.

When exhibited for the first time as a prototype at the Danish Museum of Decorative Art (now Design Museum Denmark) in 1928, the PH Septima was applauded. In 1931, Henningsen introduced a smaller version of it, based on the shade sizes from the PH 4/4. The two sizes were therefore named Septima 5 and 4. Sadly, because of a shortage of materials in the 1940s, very few examples of the PH Septima were produced at the time.

The latest iteration has a 50cm diameter, based on the shade set of the Septima 5, and has been modernised to include a brass suspension, arms and canopy. Henningsen (1894–1967), familiarly known as PH, was born in Copenhagen to the famous Danish writer Agnes Henningsen. He studied at the Technical School in Frederiksberg from 1911–14, and then at the Technical College in Copenhagen from 1914–17. He began by designing traditional functional architecture, but over the years he changed his focus to concentrate on lighting, the area for which is he is most celebrated. ‘From the age of I8, when I began to experiment with light,’ he once said, ‘I have been searching for harmony in lighting.’

He also expanded professionally into writing, becoming a journalist – he was the first editor of the LP company magazine NYT – and an author. For a short period at the beginning of the Second World War, he was head architect of the Tivoli Gardens, Copenhagen. He was forced to flee Denmark during the German occupation, and became an important member of the Danish colony of artists living in Sweden.

His lifelong collaboration with Louis Poulsen began in 1925 and lasted until his death. His pioneering work on the relationship between light structures, shadows, glare and colour reproduction remain the foundation of the lighting theories still practised by Louis Poulsen. ‘His thinking about the way design shapes light has informed generations of lighting designers,’ said Rasmus Markholt, former LP product and design director, ‘not to mention the Louis Poulsen story.’
louispoulsen.com The thing about a very simple, pareddown shape is that it has to be just right. That’s the feeling you get from the Semi Pendant. Its line, based on the idea of putting two crescent shapes back to back, is perfect. Designed in 1968 by Claus Bonderup and Torsten Thorup, the flared metal shade was a reaction to the soft organic forms prevailing in Denmark at the time. Bonderup and Thorup wanted to create a lamp that incorporated sharp, clean lines and a geometric shape. The design won first prize in a competition at the Royal Danish Academy of Fine Arts, School of Architecture. Perhaps a bit of a slow-burner, in the 1980s the pendant became Denmark’s bestselling design and gained worldwide recognition. Previously available in 30cm, 47cm and 60cm diameters, Gubi has recently introduced an impressive 90cm version, a scale even more appropriate to the meeting room, restaurant or lobby. Made of painted spun aluminium, it is available in black or white, both with semi-matt finish. Thorup and Bonderup, born in 1944 and 1943 respectively, both graduated from the Royal Danish Academy of Fine Arts, School of Architecture, in 1969. The two architects subsequently worked together at Danish architect Henning Larsen’s studio in Copenhagen. They teamed up professionally for the majority of their careers after Bonderup returned from a stint in Brazil with the architect Sérgio Bernardes, and began working with Thorup’s firm, which was founded in 1968. Together they have designed watches and in-store displays for Georg Jensen, the Arktikum museum in Finland and the harbour area in Helsingør (Elsinore), where they designed everything from urban planning to the ticket off ices. Their floor lamp, designed in 1978, and table lamp, 1979, are both featured in the MoMA New York collection.
gubi.com