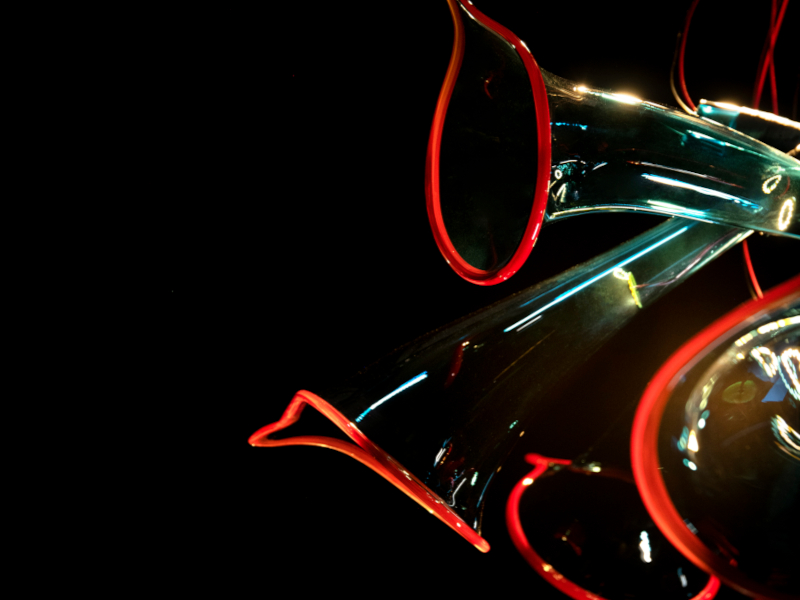 THE DESIGN of lighting products certainly doesn’t lack diversity at the moment. There will always be familiar tropes but there is a high degree of experimentation whether in technology, materials or form, as demonstrated by the following luminaires, all fresh from Milan’s Salone del Mobile. Like most design, they inevitably reflect our current preoccupations and thinking: the facility, flexibility and control that technology allows, and in the face of that technology, a deepening preoccupation with traditional techniques, the handcrafted and the natural world.

Oplight by Jasper Morrison
Jasper Morrison hopes that Oplight looks like ‘the most obvious, definitive shape a wall light could be’. Morrison’s Glo-ball has become one of Flos’s most iconic luminaires – and it has a few – and in some ways it was a starting point for the main element of Oplight, which became a progression of what he was trying to achieve with the original luminaire. It looks, says Morrison, like ‘an even more flattened outline of Glo-ball’.

When Morrison took the Bauhaus ball lamp and gave it an oval shape, he made the shape adhere as closely as possible to the light source but was constrained by the size of the lamp, which still had to be located inside the diffuser. LEDs have allowed him to go further in reducing the object to a minimum. 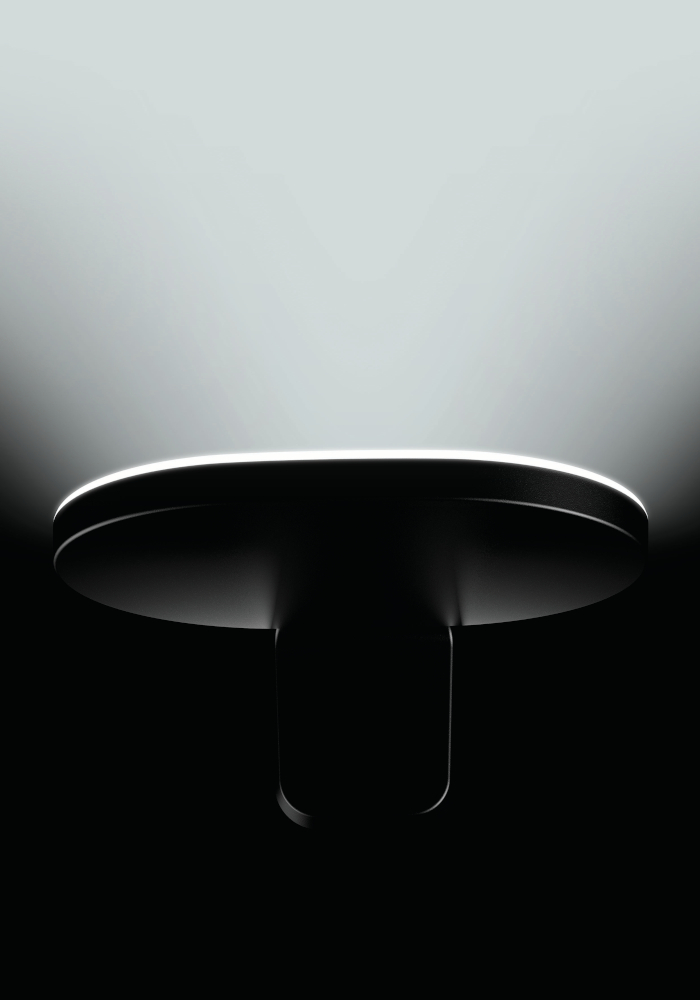 But the fitting is just as much about performance as form, its carefully considered construction and optics allowing it to illuminate a room rather than being a mere route marker. Its LED board is covered with a clear, ridged panel that deflects the light out at an angle away from the wall. The surface treatment of the diffuser, and the special design of the interior, control the emission by optimising the light effect on the wall and its distribution towards the ceiling. The raised edge of the diffuser also intercepts part of the light emitted and illuminates uniformly, highlighting the perimeter of the lamp to viewers from below.

Oplight is designed to be future-proof, conceived not only for longevity but also to be completely recyclable at end of life. Among several sustainable manufacturing features, no glues or toxic materials are used, and parts are separable for individual replacement or recycling.

Mito Aura
The original award-winning pendant version of Mito has been expanded with ceiling-mounted and wall versions. The ring-shaped luminaire with its characteristic gap in the perimeter has high quality (CRI 95) independently controlled uplight and glare-free downlight. 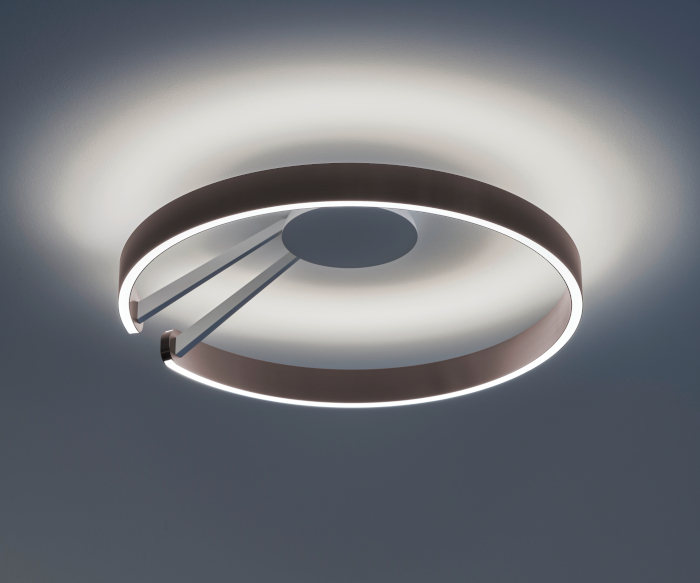 It is also colour tunable, allowing a shift from warm to cool white light. Changes in colour temperature or light level can be preset, or effected with touchless control using the Occhio air controller or air app. 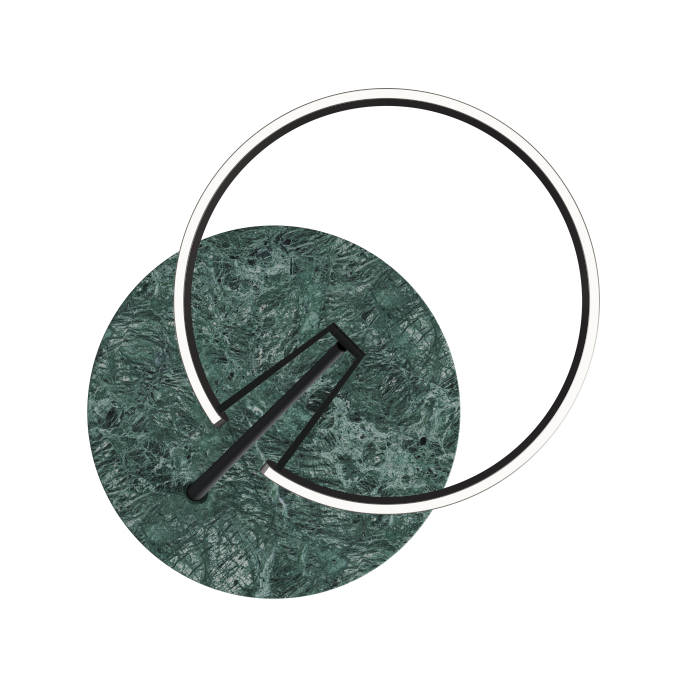 100
Vancouver-based Bocci, which specialises in glass, also focuses on highly individual, handcrafted products. Its new pendant light, 100, brings together multiple glass artists within the Bocci studio. Each fitting comprises molten glass bubbles that have been prepared individually, then ‘smashed’ together to produce unpredictable interlocking glass forms. 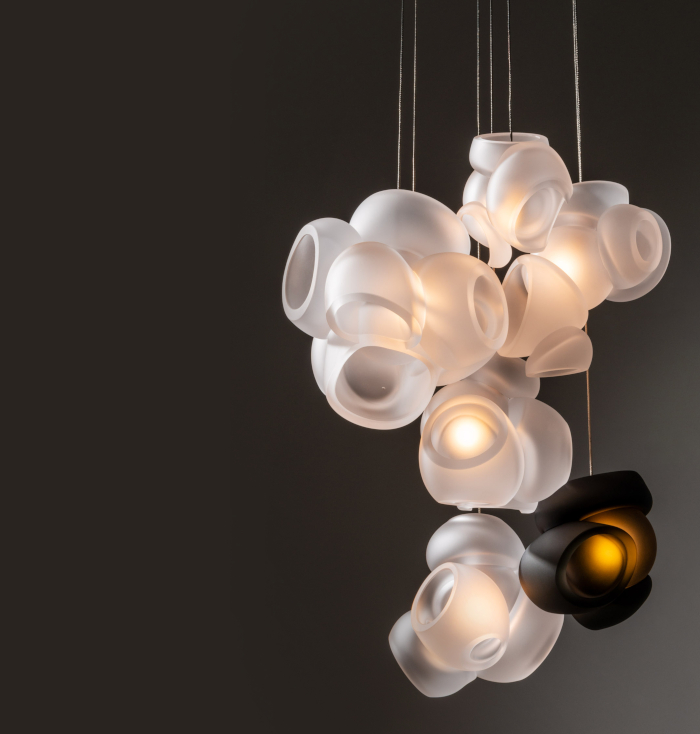 ‘We’ve been developing new methods for making forms for many years and routinely cutting prototypes to learn about what’s happening inside [...] but it occurred to us that the act of cutting itself can be part of the work, not just a learning exercise,’ says Omer Arbel, the company’s creative director and co-founder. ‘For 100, we use a diamond saw to cut swathes off the bubble amalgamations after they cool, exposing the most fascinating parts of the geometry.’

This process is quite complicated, according to Jay Macdonell, glass master at Bocci. ‘The combination of hot working and cold working requires intuition and skill in equal measure,’ he says. ‘There are also pragmatic considerations. To expose the inner geometry, the artists cut openings from several angles, while also addressing the hanging balance of the piece […] keeping in mind the central bubble must remain intact, as it becomes the diffuser for a light source.’
www.bocci.com 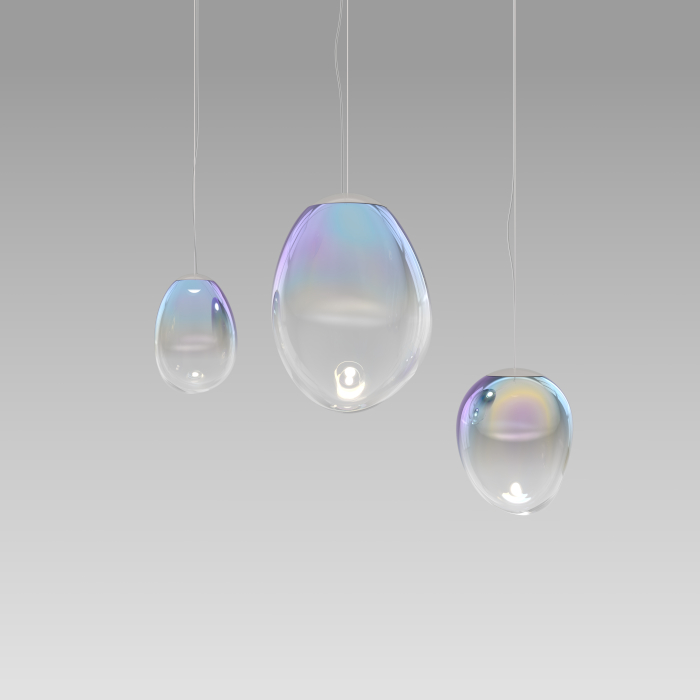 As with most good lighting, Stellar Nebular is a simple concept, as airy and delicate as a soap bubble, which belies the skill required to create it. The family of suspended lamps – in three different sizes – combines artisan glass blowing with innovative finishing techniques. The glassmaker shapes the glass by blowing into a standard mould then softly reshapes the regular, basic outline to produce an individually handcrafted piece. The glass is then treated with a dichroic finishing process.
www.artemide.com 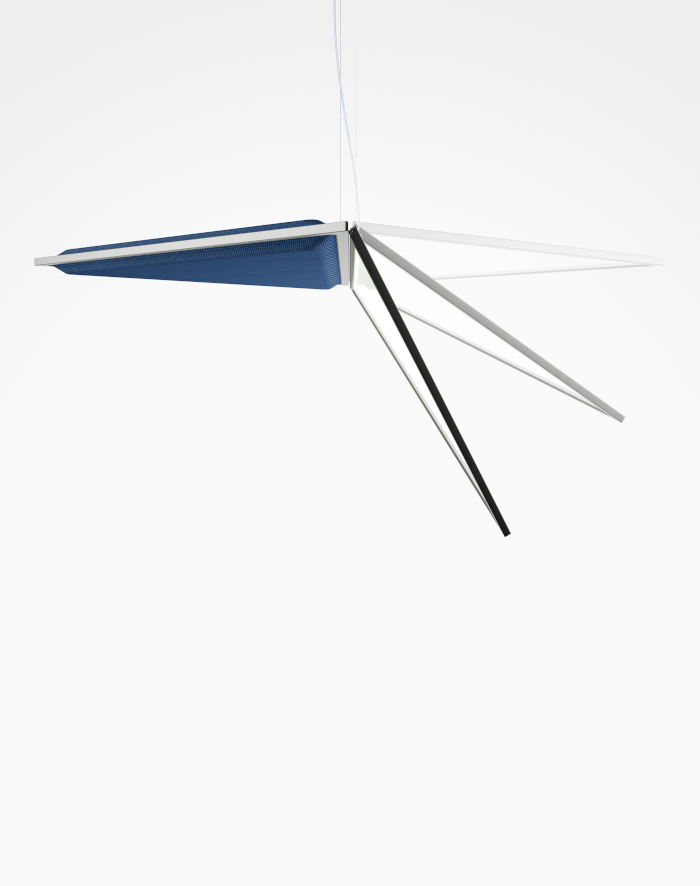 ARTEMIDE, Flexia by Mario Cucinella
There probably aren’t too many people familiar with the word papiroflexia, but to the uninitiated it is the art of papyrus folding and, more pertinently, the inspiration for a typically ingenious new luminaire from Artemide. Available in both pendant and wall versions, it combines an acoustic panel section with a transparent diffuser featuring the company’s patented Discovery technology which gives a uniform, glare-free emission. Flexia’s flexible wings have a rotation mechanism that moves from 0–15º and 30º, creating a variety of possible inclinations and positions.
www.artemide.com 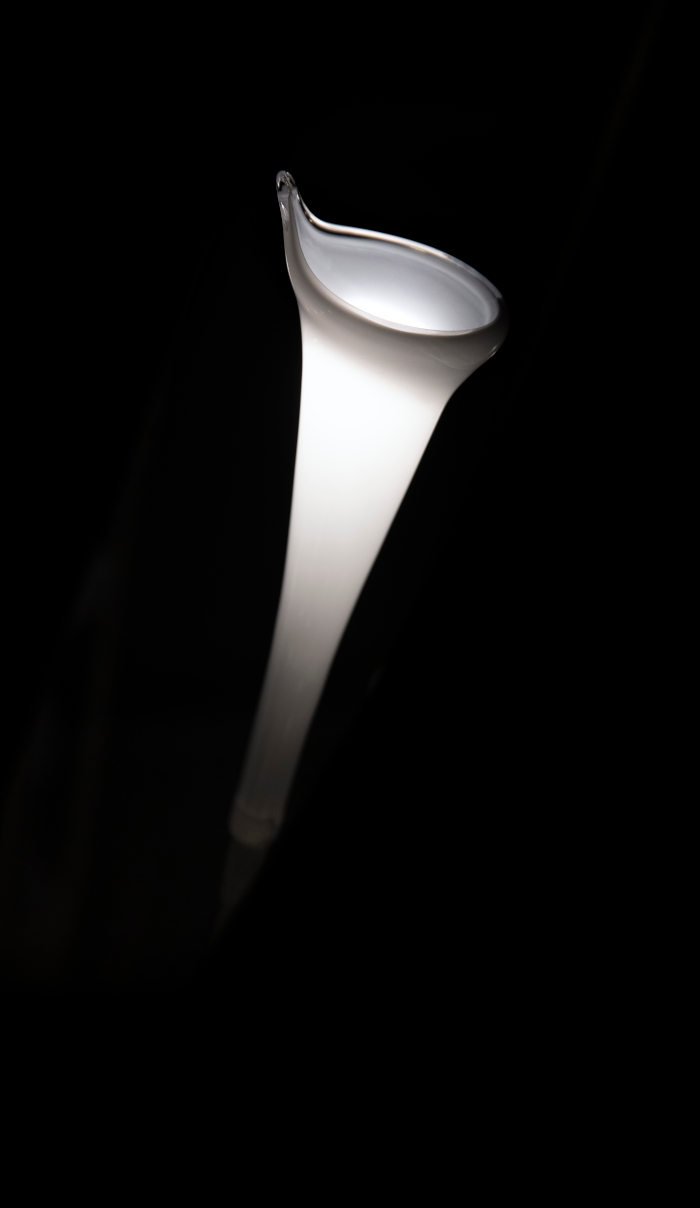 Gritti is a new brand from Venetian company Sylcom, a specialist in Murano glass. Marc Sadler has designed the first series, Lumina Naturae, a series of eight lighting fixtures which, as the name suggests, reference the natural world and organic forms. Some more contemporary in style, others with a suggestion of the more traditional, they variously exploit the colour and reflective/refractive qualities of glass. 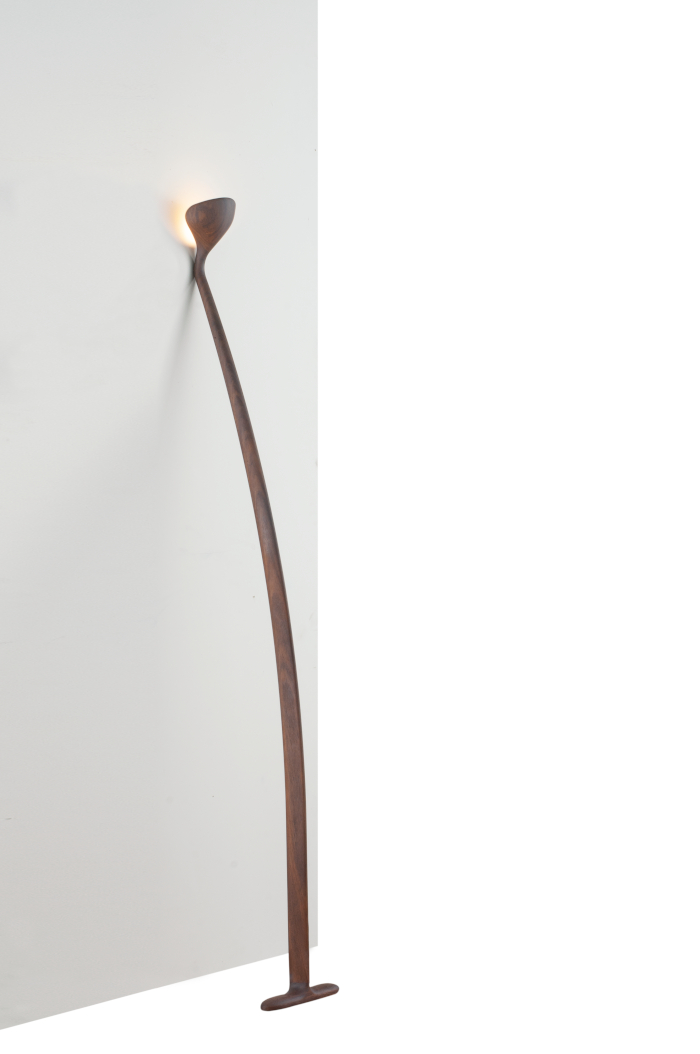 MARONI, Skia by Dimensione Chi Wing Lo???????
Rechargeable portable luminaires have so far generally manifested as table lamps, many some sort of riff on the mushroom shape. The dimmable Skia lamp is, refreshingly, a floor lamp, a sinuous, sculptural form that relies on the wall for support. Made of solid wood, in oak or sucupira, it can be controlled by a touch sensor at the top of the stem. www.chiwinglo.it 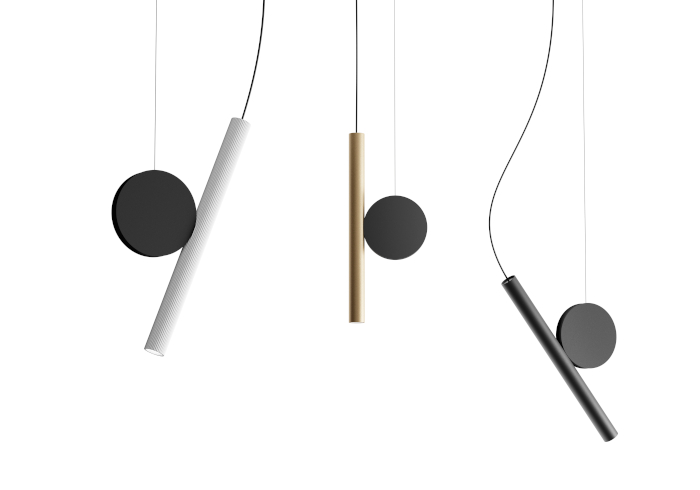 LUCEPLAN, DOI by Meneghello Paolelli Associati
A pendant lamp system, DOI is one of five new interior product ranges and four outdoor lines launched by Luceplan. DOI comprises two pieces: the disk (attached to the ceiling by a steel cable) and the spotlight (in extruded aluminium, powered by a slender electrical wire). A small magnet inserted inside the extruded piece attaches it to the iron disk, which acts as a counterweight, allowing movement along the circumference, while remaining at a tangent to it.
www.luceplan.com 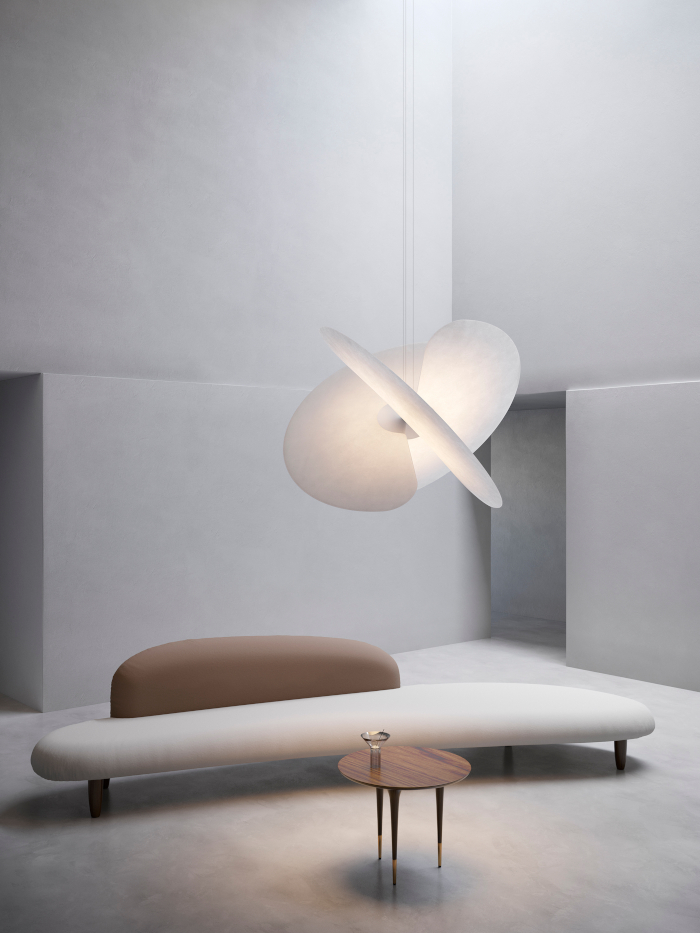 ???????A sizeable statement luminaire – with 60cm and 1m diameter options – Levante nevertheless has a light, ethereal quality. The fitting is formed from the intersection of three large fan shapes, which are attached with magnets to the central core containing the concealed light source. Apparently made from an unspecified material used by the food sector, its translucent rice paper qualities create a gentle, uniform, diff use light. And while it may look delicate, the material is washable, strong and recyclable.
www.luceplan.com