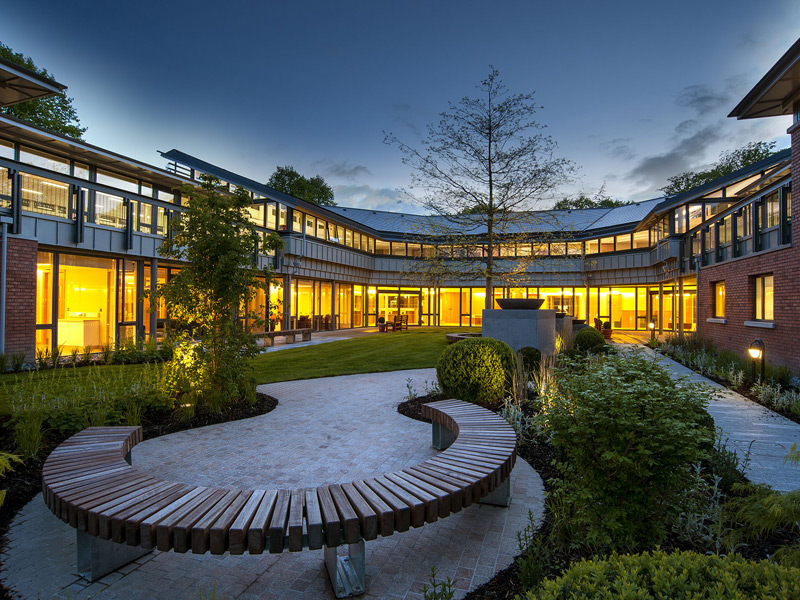 If we accept that some patients consigned to mental healthcare are potentially unstable, we are inclined to treat them with distrust. Those citizens with the greatest need for comfort and reassurance are subjected to hostile-looking environments with none of the finesse and subtleties we would wish in order to provide convivial surroundings.

The result is that traditionally, mental healthcare projects fit squarely in the institutional category. People undergoing mental health care are usually treated with uncertainty, because they can be fragile and they could be a danger to themselves. They therefore receive treatment in safe environments, where edges and surfaces are carefully chamfered, sharp objects are avoided, electrical systems are fastidiously insulated and where the lighting is designed to avoid self-harm. Loose lighting with accessible sockets and flexes are forbidden, as are wall lights. This category of environment is called anti-ligature and has much in common with another common type of institution - prisons. But the Old See House, a new mental-health facility in Belfast, is an exception to these rules.

Light Bureau was first approached to create the lighting scheme in 2009 by architecture practice RPP Architects in Belfast, working with Edinburgh-based practice Richard Murphy Architects on the project. The work on site finally began in 2012 and the project was completed last year. Inside the Old See House facility in Belfast, where the lighting was designed by Light Bureau.

Consulting and treatment area at Old See House
To avoid hostile geometry, RPP designed consulting rooms with a circular banquette. Externally, this made for soft edges and friendlier movement. The circular surrounds were in timber and incorporated a small clerestory at high level. To emphasise this warm material, we proposed a linear LED source, concealed at high level in the clerestory surround. In this way a subtle wash of light was achieved in the timber faces.

Internally, there was the banquette for informal consultation with patients, and a desk. A concealed linear LED was used to provide indirect light at the banquette. At the desk, a wall source was used, incorporating a linear warm white fluorescent lamp. The source is shielded so that only indirect up and downlight is produced. For additional lighting, downlights are used.

All rooms incorporate a simple scene-set system so that the lighting could be adjusted according to the style of consultation and need for soft ambient or more purposeful task lighting.

In treatment rooms, higher illuminance levels were required. The architect had designed the ceiling to pop up on two elevations so that the central ceiling area was lower and naturally shielded the view of the upper soffit area.

By using simple but enclosed diffuse linear fluorescent sources, the effect of indirect illumination was achieved from these lights and, in conjunction with a large opalescent central recessed source, the lighting could again be balanced between the two light sources using a scene-set system.

Old See House was formerly a nurses' home from the Sixties. Belfast HSC Trust, which owns the building, wanted to create new facilities on the site, including a clinical wing and a residential refuge for patients who had already had treatment but were in need of a short stay while resuming their lives in society.

The ambition of both architecture practices was for an exemplary facility, set apart from traditional healthcare institutions, and the client embraced this initiative. But what quickly became apparent was that standard lighting legislation was not consistent with an enlightened architectural approach.

RPP Architects asked Light Bureau to take a fresh look at possible lighting solutions at Old See House that could better fulfil its vision for a modern mental healthcare facility.

This meant that the lighting designers had not only to challenge legislative norms for illuminance levels and uniformity but also, more fundamentally, to review standard anti-ligature equipment and start again with answers. Wherever possible lighting was integrated at the Old See House.

Crucially, Belfast HSC Trust was also determined to avoid typical mental-institution standards and encouraged Light Bureau to pursue a new way of lighting this project. It's rare that healthcare is so progressive. With this type of project and client, we would expect to work very hard to change a design from expected norms, but this was very different. The client actively persuaded us to seek new solutions and we could not have hoped for a better reception to our ideas.

Anti-ligature lighting is designed to be tough. They are typically made from aluminium castings and look more at home in public underpasses than in hospitals. They usually have compact fluorescent light sources with vandal-resistant polycarbonate diffusers. Anti-tamper bolts complete the aesthetic. Nothing says 'We don't trust you' more than the standard palette of such luminaires, and the quality of light they give, as can be imagined, is featureless and bland. The idea of lighting clinical areas like this is hard to understand but to try to create a homely space using such fittings is impossible.

We started first with the residential spaces. Much like a hostel, individuals slept in separate bedrooms but shared lounge, kitchen and dining facilities. The designers considered the activities in each of the spaces including furniture arrangements and finishes, and opportunities were identified where comfort could be created. Wherever possible, lighting would be placed at human level - floor, table and wall level. Ceiling sources were also included in the toolkit, but wherever possible, these were to provide indirect light rather than too much flat, overhead light.

Light colour was considered; it's well understood that cool colours are good for active environments such as office spaces and that warm lighting is better for relaxing spaces and homes. We also thought about the control gear that would be used in the lighting equipment - what is less understood is that flicker associated with low-frequency control gear can cause disturbance to particularly sensitive individuals.

Light sources had to be long life, low energy and low maintenance in keeping with public healthcare facilities. The designers' ambition was to use as much solid-state (LED) lighting as possible, but for significant lighting to common areas and consulting rooms, fluorescent lighting was still much more viable and economical than LED alternatives. Technology has progressed a long way in six years, but at the time the project was being designed efficacy of LED sources, and therefore cost per lumen, was still prohibitively expensive for general lighting.

Fluorescent technology is mercury based and is often associated with sleep disorders, usually in a minority of sensitive cases. But given the users of the space it was felt that limiting use of this technology in bedrooms and relaxation areas was a good approach so, where light levels could be lower, LED sources were considered.

Our approach, as usual, was to integrate as much of the lighting as possible, and the Old See House is an ultimate example of this concept. The dining space was double height, and to try and reinforce a domestic feel the designers wanted to suspend a pendant above the table. Clearly this was counter to the accepted approach, but we created a suite of domestic products that placed the light source outside of the lit object.

So the pendant was realised by a diffuse shape, suspended from the ceiling using low-tension nylon wire, which would break easily with any weight placed on it, therefore obviating ligature risk. The shape was designed to be soft and unbreakable. The light source consisted of a ceiling-recessed downlight with a low-voltage LED source, fixed with anti-tamper screws that were in turn concealed by a plant-on magnetic bezel.

Table lights were based on floor-recessed uplights, the kind that are robust enough to walk or drive over. LED light engines were again used and, as with the pendant, the drivers with mains-volt input could be placed several metres away so that they posed no electrical risk. The table light concept was completed with a polycarbonate diffuse cylinder placed over the uplight to create the domestic glow that the designers were after.

Elsewhere, low-level, wall-recessed LED floor washlights were incorporated into stairs and circulation spaces so that in conjunction with a scene set system the general fluorescent amenity lighting could be dimmed to 'off' at night, and wayfinding late at night was managed by a subtle low-light level. In bedrooms, the rule book was further rewritten. Lighting was integrated into fixed furniture, including wardrobes and headboards. In this way, reading and general lighting could be achieved by low-level sources where everyone would expect to find them in any typical bedroom setting. In bathrooms, linear LED lighting was integrated into mirrors for practical and flattering light - imagine the alternative of an aluminium bulkhead overhead with fluorescent lamps.

In the clinical area, the circulation spaces benefit from excellent daylight, but for night-time use we again wanted to avoid excessive downlighting. The lighting responded to the corridor geometry, with linear wallwash lighting fitted with opal diffusers to provide a gentle emphasis to the non-window elevation. Access to consulting rooms was via a recess in the corridor and, similarly, the far walls of these recesses were lit with a simple linear slot light. At junctions to pairs of consulting rooms, large, circular opalescent forms were used to punctuate the routes and increase the light levels at those points.

Elsewhere, in the central lounge space, fixed seating is lit with a combination of integrated floor wash lights, concealed details to furniture and, to improve light levels and ambience in the evenings, pendant feature lighting for the higher ceiling area. Owing to hygiene requirements, a cove could not be incorporated but as this clinical space is always managed by staff, standard suspended lighting was allowed.