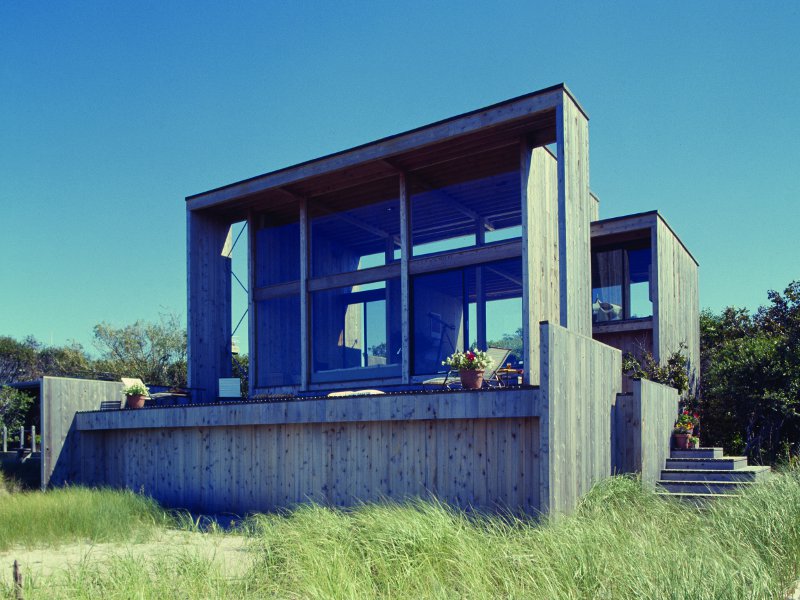 When British artist Richard Healy discovered forgotten American architect Horace Gifford (1932–92), he made an animation about one of his beach houses. That film is now presented in a bespoke installation he designed for a major South London Gallery show. Herbert Wright follows the trail from Long Island to Peckham

'Form followed foreplay in the 'make-out loft' says the smooth-voiced commentary as we glide smoothly up towards a rendered floating level of timber, over the edge of which sheepskin rugs spill. The animation is from a film by Richard Healy, called The Pines. The new twist on Walter Sullivan's mantra for the modernist architecture movement is by Christopher Bascom Rawlins, taken from his book Fire Island Modernist: Horace Gifford and the Architecture of Seduction. It describes one of Gifford's surviving beach houses, designed in the Sixties and Seventies. They were designed for the gay community that cruised and used a particular beach locale at Long Island called Fire Island, in the days before AIDS. The houses, each an elegant ensemble of 3D geometries, were uniquely tailored to host a heady, hedonistic lifestyle, but they also sat lightly in the sand dune topography there, anticipating sustainability in their timber structures. In the South London Gallery (SLG)'s new exhibition Last Seen Entering the Biltmore, Healy has expanded the film into a multimedia installation. Early designs of pitchers, table and screen from The Pines

SLG curator Anna Gritz took the title of the show from a book of writings by Gary Indiana, whose 'really bonkers plays', she notes, were a key part of the New York underground scene in the Seventies and Eighties. The Biltmore was a swank Manhattan hotel which Gritz sees as 'almost an alternative stage to Hollywood'. She'd been asked to bring together a show about performance, but she was more interested in 'deconstructing the pretence of the stage', and that zone on the edge of it, the backstage. She talked to some in their studios about the concept and, with Healy, she discussed the gay culture on Fire Island, and Gifford's work. 'I just love the architecture,' she says. And the houses provided a 'backstage' for much performance. Healy recalls that he'd been 'researching the idea of creating architecture for gay cruising' after the White Cubicle Gallery had asked him ' to make work for a toilet in a gay pub in London', and he stumbled across Rawlins' work about Gifford. 'That was it!' he says. 'From that encounter, Rawlins' book became the template for me to explore Gifford and his work'. But he adds that while the architecture is 'amazing and at times breathtaking' it was the context that captivated him: 'The sexual revolution and the birth of the gay rights movement are all tied up within these buildings. These are very real subjects, places and people.' Healy's installation first confronts the visitor with a table of five weird clear-glass bottles on a table, each blown and hand-crafted to his design, which include fetishistic elements. They reference the martini pitchers men cruising Fire Island's boardwalk carried and acted as signals and starting points for encounters. The table stands before a metal screen with pine cladding, designed to 'allow you to peek through... and maybe even see other work behind', Gritz says. 'Again, that's the idea of a backstage, seeing something through something else.' The monitor, on which the virtual reality of The Pines film plays, is mounted on the screen's other side. Just as the film choreographs a tour of a Gifford house, Healy's installation is 'choreographing the movement of the visitor in this space', notes Gritz, 'mimicking the sentiment of the film'. Richard Healy's martini pitchers are a nod to Fire Island

Blueprint asked Healy if he was addressing a trend of convergence between the real and the virtual in design and architecture. 'It's a short-cut to making work,' he replies. 'I made my first architectural animation in 2008 out of necessity. I had a graduate show to produce and only a 6m wall to present it on, so I made a computer model of the gallery and filled it with models of my work. What I do like about the technology is how it can simultaneously appear new and nostalgic. A still from Richard Healey's film The Pines

' Healy's interest in architecture is ongoing. 'At the moment I am really into Philip Guston's painting, especially those which describe a type of soft inflated architecture', he reveals. 'I am looking at composer Benjamin Britten and the home he built for his wayward lover, the tenor Peter Pears. So, I am making models of these sobbing and deflated lighthouses. It feels fitting.'