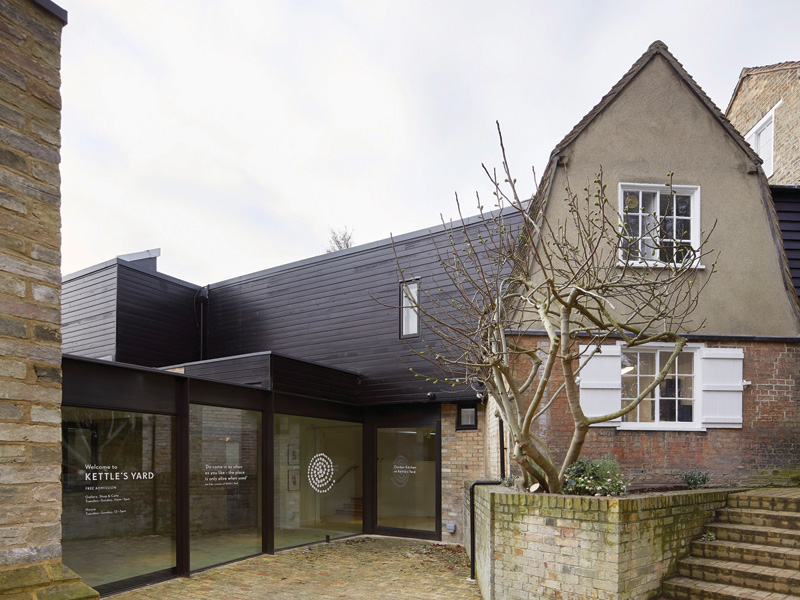 Kettle’s Yard, the eccentric museum in Cambridge, has undergone a renovation by Fobert that improves accessibility while complementing the museum's existing Victorian vernacular and mid-century modernism

From 1957 onwards, every afternoon at 2pm, anyone who so wished could ring the bell at a discreet set of converted cottages in a quiet corner of Cambridge and be welcomed into an open house of found objects and works of art. For avid collector and former Tate curator, Jim Ede, Kettle’s Yard was not so much an art gallery or museum, but a way of life, in which art could be enjoyed as part of an informal, domestic setting.

An Alfred Wallis painting was placed above the toilet, a Brancusi head on the grand piano and a lemon carefully positioned on a pewter plate so as to match the yellow dot of a Miró opposite. Such was Ede’s belief in democratising art that students could (and continue to be able to) borrow works from the collection for their own walls at home and in halls.

The sense of familiarity and feeling of being at home — as if Ede has just popped out — remains to this day. In 1970, Leslie Martin and David Owers completed a masterful modernist house extension allowing the series of understated spaces to continue to unfold seamlessly, drawing on Ede’s honest material palette of exposed wood, rough plaster and simple brickwork. One of the two new galleries created as part of the extention. Image Credit: Hufton+Crow

Now following a sensitive £11m renovation at the hands of Jamie Fobert Architects and a long, 14-year wait since commission — including a two-year closure — Kettle’s Yard unfurls further, expanding into two new spacious galleries and education spaces. You are taken on a route through architectural history from Victorian vernacular, through mid-century modernism, to the present day — but you’ll be hard pressed to see the seams. Each addition could easily jar with the other, but they come together as a coherent whole, just like the eclectic array of objects in Ede’s interior.

When Jamie Fobert Architects was brought on board in 2004 it was following a competition to design an education wing on the ground floor. With a change in director at Kettle’s Yard, the remit of the project expanded and the decision was made to demolish a series of unremarkable, piecemeal additions made in the Eighties and Nineties as pockets of neighbouring land became available. Here, Fobert’s extension is sandwiched between the exterior wall of Leslie Martin’s house, which has been stripped of its plaster to reveal the original brick, and a retained, Victorian facade facing the street.

‘Any Leslie Martin building is sacred territory for midcentury modernism,’ says Fobert. ‘It was quite nerve-wracking to say we’d like to take this bit of wall out, or move the line of the building into the courtyard, but when you spend eight years being somewhere you get to know it really well.’ The architect is currently enjoying a run of success with the completion of an extension at Tate St Ives at the end of last year and a £35.5m transformation of the National Portrait Gallery on the cards. ‘We wanted to achieve this idea of generosity and individual stages,’ says Fobert. ‘There’s such a seamless movement from the cottages to the house, most people have no idea they’ve left Victorian cottages and arrived in 1970 modernism. These [new galleries] are contemporary art spaces; they are a counterpoint to the house.’ The education space — which formed the whole of the original commission — is connected to the street level, not hidden away. Image Credit: Hufton+Crow

Arriving at Kettle’s Yard, visitors are now greeted by a smart, new, glazed entrance screen, framed in black, patinated bronze. Where once the visitor journey was convoluted and confusing, a new welcome area and shop connects all the different elements and gives a clear route from the cottages, to the house, to the new section.

Part of Kettle’s Yard’s charm is how the house slowly reveals itself as you move up, down, around and across, but Martin’s love of a change in level — there were 16 sets of stairs when it was completed in 1970 — made the house impossible for people with disabilities to explore. Now, level access has been created across the ground floor and a new ramp leads down to the new spaces.

Taking cues from Ede’s cottages and Martin’s house, Fobert’s extension pays homage to their approach to materiality and light in space. Both galleries feel lofty, with concrete floors and white walls; one has roof lights modelled on Martin’s detail, while the second has a large, floor-to-ceiling window, punched through the street facade, which can be used to move art in and out.

The education wing is now given a double-height space, wrapped in concrete and sunk below ground, with a window connecting it to street level. ‘Instead of hiding it away, we’ve put it on the street and made it part of the city,’ says Fobert.

An angular, raw, black steel staircase, its welding marks left bare, continues up to a multipurpose research space, a lecture room, and finally offices. ‘With contemporary architecture now we’re obsessed with detail: things being flush, shadow gaps and minimal joints. Spending time in Leslie Martin’s building you realise how relaxed it is — there’s a sense of letting things be what they are and letting the making exist,’ explains Fobert.

Ede’s intention was for Kettle’s Yard to be ‘a home and a welcome, a refuge of peace and order’. In its modest way, Fobert’s extension clarifies that idea with its subtle intervention, so Ede’s original concept remains the focus