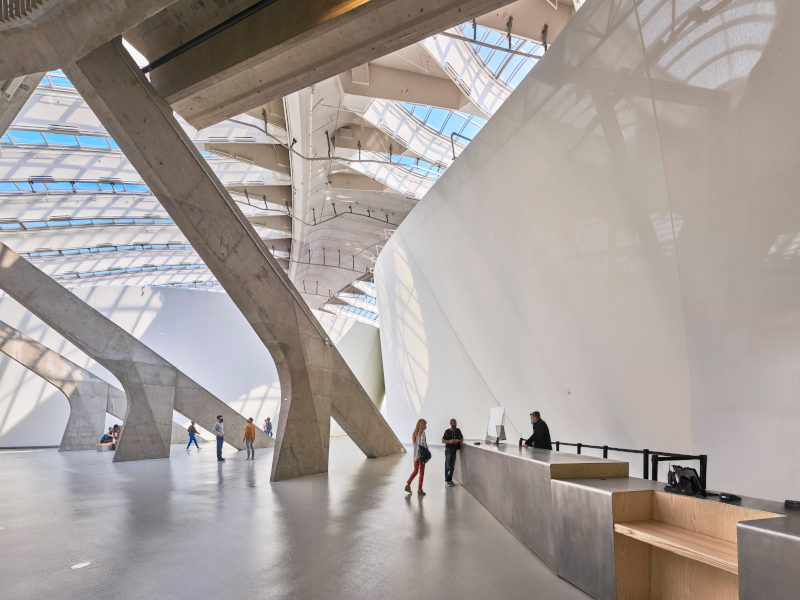 The Montreal Biodome is a ‘living science museum’, containing five distinct ecosystems, from the tropical rainforest to subantarctic islands, and filled with as many as 230 animal species and 750 plant species. While a hugely popular attraction for the city at the heart of its Espace pour la vie/Space for Life complex (collectively, the most visited museum spaces in Canada), a 2014 competition for its redesign asked for an enhanced visitor experience and transformation of the Biodome’s public spaces. Taillibert’s design was repurposed as a Biodome in 1992, with animal and plant enclosures inserted under the sprawling glass ceiling

For Montreal-based practice Kanva, founded by Rami Bebawi and Tudor Radulescu in 2003, the reimagination of the Montreal Biodome – from the initial competition through to completion in 2020 – has been ‘the most complex in every way’ of the practice’s projects thus far, according to Bebawi.

While an architect needs to be alert to the varying needs of the people who will use a building, the Biodome has posed an entirely new challenge for Kanva. As Bebawi jokes, ‘I’m comfortable designing for humans, but it’s new to design for other species!’ There are 230 animal species held in the Biodome, including sloths

The project required the expert knowledge of a great number of collaborators from scientific backgrounds, with the design emerging from collective workshops. The architects had to learn about the needs of the different plants and animals: examples include studying penguin swimming patterns – some come out of the water on their stomachs, while others do not – and drawing plans and elevations of beaver huts; ‘they don’t teach you that at school,’ Bebawi laughs. As the Biodome replicates activities the species would have in the wild, Kanva responded by allowing the beavers to carve the wood themselves that would be used for their hut. The Biodome was not purpose-built, having originally been a velodrome designed by architect Roger Taillibert for the 1976 Olympic Games. It was first transformed into the Biodome in 1992, ‘in quite a radical way’, Bebawi says, but he feels that it has not been celebrated enough in recent years.

Kanva’s reimagining of the Biodome introduces soaring white curved walls, dividing the plan while opening the space to the Taillibert ceiling above. These new large-scale additions, with their smooth white surfaces, contrast with and highlight the dramatic structural concrete supports of the original building.

The walls are ‘living’, paroi vivante, as Bebawi calls them, acting as a ‘skin’ around the ecosystems – protective but more porous than solid walls – wrapped around a steel and aluminium support structure and fastened with ropes. They are defined by both strength and delicacy, a combination that is reflected in the sensitive approach throughout.

As Bebawi explains, the goal of the Biodome is to make humans more aware of the natural world and their own role within it – including an awareness of climate change, its causes, and effects. The architects felt they could create this attunement to the natural world through careful consideration of all the senses. ‘We share with [these] species our senses,’ Bebawi says. An entrance fissure to the main hall space between Kanva’s paroi vivante, or ‘living walls’

While working on the Biodome, the practice started exploring how architecture can more powerfully use the senses as a ‘tool’ with a project at a local contemporary art gallery. Having surveyed people about when they felt closest to nature, the idea came about for an installation called ‘Deconstructing Camping’, in which the smells, materials and even the tastes – through abundant marshmallow-toasting – created a calming, immersive experience for visitors. The Biodome’s reconfiguration also uses the senses to profoundly change the visitor experience. While the previous entrance and ticketing areas had been crowded and noisy, undermining the Biodome experience before it had started, Kanva’s entrance sequence takes visitors through passages between the walls to a foyer area in the centre – a ‘void’ between the different ecosystems of the Biodome. While in this space visitors are not yet able to see the wonders of the individual ecosystems, and this pre-visit pause offers a kind of sanctity to the ecosystems, a break between the city outside and these five very different worlds.

Each ecosystem is then entered via an ‘ecotransit’ – a narrowed passageway, with a subtle upward tilt to the floor that slows the pace. At the entrance to the ecosystem, there are automatic doors; when these open, the smells and sounds flood in, but the sights – delaying the use of this more dominant sense – are still obstructed by a beaded curtain for a few seconds longer. Reflecting on what Kanva learned through the process, Bebawi explains how surprised he was by the simultaneous strength and fragility of the ecosystems. While these are man-made environments, they are very much living things, and even small imbalances can cause major problems. This was a challenge during construction: ‘You can’t drop a screw here,’ Bebawi says. ‘You can’t leave anything behind, because you’ll never find that nail, and when we bring the species back, they’ll find it, they’ll eat it, then they’re going to get very hurt.’

Despite the immersive experience, Kanva still wanted the visitor to be aware of the man-made nature of the place, and decided to expose the mechanical systems that create and maintain the conditions for each ecosystem. In a similar way, visitors are able for the first time to look down over all the areas from a new ‘belvedere’ level. This is also where the educational areas of the science museum are located, separated from both the ecosystems and the calm of the central void below.

Kanva hopes to leave a lasting impact on Biodome visitors – even though they will only be in the space for an hour and a half, maybe two, before leaving. Bebawi says he has received a number of notes from parents to this effect. With a succession of narrowed passageways, open spaces and obstacles, Kanva has attempted to curate the way visitors circulate through the museum. This ‘ecotransit’ system has been designed to inspire a proximity to nature

Equally, describing those six years and their impact on the firm, Bebawi describes it as a ‘lifetime project’ – he even has the start and end dates carved into a fence at home. He and Radulescu were anxious in the beginning, having never done a museum before, but were also reliant on winning the competition for the survival of the practice. But beyond that, Bebawi feels it has profoundly affected the team. ‘I think it changed our lives,’ he says. ‘I’d go as far as that.’