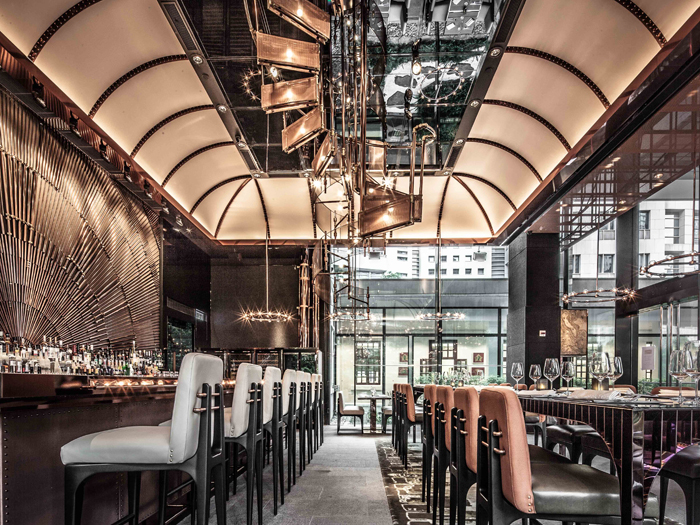 If it's true that we eat with our eyes, then it stands to reason that the design of the world’s best restaurants must be as delicious as the food they serve. We choose 10 sumptuous eateries from around the world where design and food come together in perfect harmony.

With its minimalist design and tree-like structures of blonde wood, this canteen looks more Scandinavian than Spanish. Even so, its layout is inspired by traditional Galician cantinas and evokes through its stylish design the feeling of dining outside during rural summer festivities, according it its designers.

With some of the most spectacular views in Europe, this restaurant in London's mighty Shard hasn't scrimped on interior design. Inspired by gin and tea - both of which have a history in the local area of Southwark - it has dark green and brown leather, black marble herringbone and a dark oak floor.

Occupying an old warehouse which had been used to store dried fish, whale oil and skins, Noma - three times voted the world's best restaurant - looks like it has been shaped by the elements rather than the hands of interior designers. The starched white tablecloths that are de rigueur in many luxury restaurants are ditched here in favour of bare wood that will grow even more beautiful with age, and the use of natural materials, such as scarred wooden beams and furs draped over chairs, mirrors chef-proprietor René Redzepi's obsessive approach to locally sourced and foraged ingredients.

Situated in a converted Grade II listed 19th Century girls' school, the third Michelin-stared restaurant to be opened by brothers Chris and Jeff Galvin has also won several awards for its design, including the Restaurant and Bar Design Award in 2009/10. The interior, by designLSM gives breathtaking vistas across the 30 metre-high cathedral-like space. Understated details complement the stunning Victorian period conversion.

With the awsome Mount Fuji as a backdrop, this igloo-like noodle restaurant is open to the elements, except in the strongest winds. It is specially designed so that natural breezes do the job of air conditioning and give the diner a feeling of being inside and outside at the same time. The interior, minimal with simple wooden furniture, creates a feeling of tranquillity.

Bringing a touch of modernity to the restaurant at the Palais Garnier opera house in Paris, Odile Decq's scheme has an undulating interior structure which is cleverly designed so that it doesn't touch the walls of the historic building. A mezzanine level is suspended with concealed steel plates, while a glass wall encompasses the interior isolating the space from the building shell. Red furniture and floors create a theatrical character reminiscent of the phantom of the opera which was once performed in the Palais Garnier auditorium.

Reminiscent of Ridley Scott's film Blade Runner, this restaurant features digital mapping projections whereby images can be projected directly onto sheer screens and also onto the mirrored panels of a fractal ceiling weighing some 1500lbs. Bespoke projections can be created meaning the restaurant can change its look depending on the occasion or time of year.

A copper bar, copper light shades and even copper vases on the tables make this restaurant interior glow with sophistication. It also features lots of green, inspired by the Basel tradition of painting the front doors of houses green.

The basement of a shopping centre might not be the most promising location for finding beautifully designed restaurants, but Kaiseki Yoshiyuki and Horse's Mouth, a Japanese fine dining, or Kaiseki, restaurant and speakeasy style bar, are hidden gems. The interiors feature tiled walls and cut-out windows displaying some 3000 origami flowers amid leather seating and dark wooden tables.