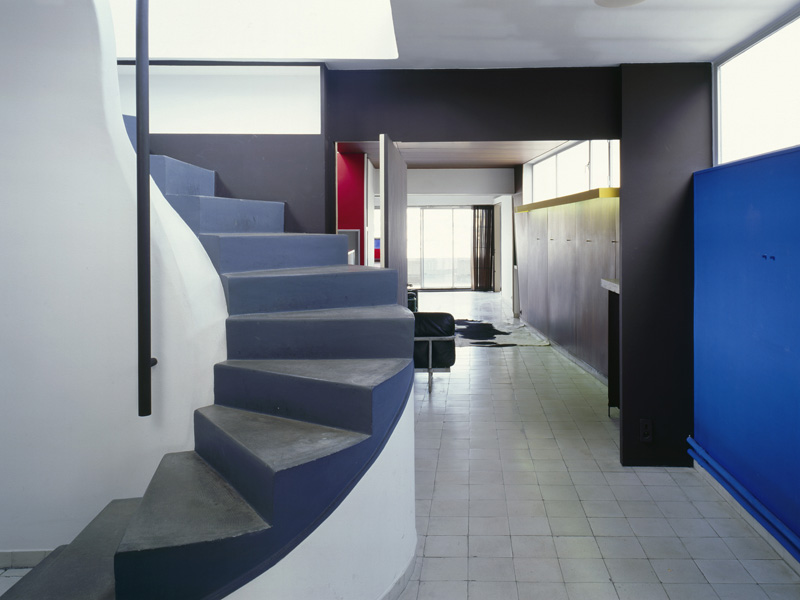 Matilda Bathurst visits the Paris apartment where Le Corbusier lived and painted, comparatively forgotten among the landmark designs he built for others

Navigating west through the formidable 16eme of Paris, flanked by the silent houses of the rich and the old, I eventually arrive in the sports district of Molitor, home to the Jean Bouin stadium, the Parc des Princes, Roland Garros, and the legendary Piscine Molitor. It was here that Le Corbusier chose to live and paint, on the 7th and 8th floors of his Immeuble Molitor. Comparatively under-visited (generally bypassed in favour of the Maison la Roche or the Villa Savoye), the apartment is a stark and shabby memory of once-clean lines and purist colours, ornamented over the years by wear and tear.

Every chipped wall, every scraped floor, is thrown into relief by the light that floods each room. Built with his cousin Pierre Jeanneret between 1931 and 1934, the Immeuble Molitor was the first ever residence to have an entirely glass façade, a combination of horizontal sliding panels and translucent glass blocks. While the building is primarily an experiment in the urbanism principles of 'La Ville radieuese' (sky, trees, steel and cement), the apartment is designed in simple accordance with Le Corbusier's way of life.

It is above all a testament to the importance of light in guiding the process of living; a life weathered into the walls, rather than preserved in amber.

From 1934 until Le Corbusier's death in 1965, the building was home to the split personality of Charles-Édouard Jeanneret. In the morning the atelier housed Jeanneret the painter; after the sun moved round from the east-facing windows, it was once again occupied by Le Corbusier the architect and businessman. An anecdote tells of a journalist who, arriving before noon, was curtly informed by the great man himself that Le Corbusier was not in.

You can imagine the journalist's apprehension as he made his way to the very top of the building, approaching by the cramped, carpeted lift, then climbing the narrow spiral staircase - scaling a height that held no apprehension of old age, no concessions to weakness. On arriving at the seventh floor he would have been squeezed into a narrow corridor, its glass wall facing into the vertiginous open core of the building. Surrounded by a series of identical grey doors, he might have chosen one at random - shortly to be closed in his face.

The doors - to the kitchen, the maid's room, the atelier and the central spiral staircase - offer an efficient system of avoidance. This way, the maid could enter the kitchen without having to walk through the apartment, and Le Corbusier could access his atelier without encountering his wife. Once inside, this system of access and evasion is perhaps more aesthetically generous, with two pivoting doors separating either the atelier from the apartment, or the apartment from the central spiral staircase where guests would climb to their rooftop quarters and terrace. The result is a series of shifting perspectives according to the requirements of the space, true to Le Corbusier's theory of 'la promenade architecturale'.

The atelier, with its white vaulted roof and glass walls to east and west, is designed according to a meticulous 'glare strategy'. A combination of clear panes of glass, wooden panels to control blinding light, and diffracting glass blocks to eliminate shade attempt to artificially reproduce the light of the Mediterranean. Glancing outside, the visitor's gaze is hijacked by the huge undulations of Rudy Ricciotti's restored Jean Bouin stadium, vying with the linear severity of the Immeuble Molitor.

Classic signatures of Le Corbusier's style, from the purist colours stretched across the walls of the apartment, to furnishings such as the LC4 chaise-longue, are moderated by elements lent from other sources; the kitchen designed by Charlotte Perriand, or the exposed bricks and breezeblocks of the adjoining buildings. Le Corbusier said of the wall in his studio: 'The stone can speak, it speaks to us through the wall. Close to us, in contact with our hands, it is a rough and clean skin. This wall is my everyday friend.'

Elsewhere, the apartment is filled with surprising details, such as the marble dining table designed in the style of a morgue slab (practical for red wine spillages), and the stained-glass light-box which communicates between the interior and the balcony - a cabinet for the external display of 'sculpture or cheeses', and a sudden block of coloured light projected into the open-plan interior. On heaving open the door to the bedroom, weighed down by inbuilt storage space, the visitor is struck not only by the merging of bathroom and sleeping quarters, but also the absurd height of the bed. On slender stilts, it suggests that of an extravagant sun-king, or else a prisoner's bunk. Raised so that Le Corbusier's morning view of the landscape might not be blocked by the high concrete balconies, it is another simple if unusual response to sight-lines, impasse and access.

The Fondation Le Corbusier have lined the apartment up for renovation after work has finished on the Maison la Roche, perhaps in the hope of drawing visitors from the luxury hotel currently being built from the remains of the Piscine Molitor. But the shabbiness seems key to the 'devil-may-care' attitude that still pervades the apartment; too hot in summer and too cold in winter, it is far from the 'essential joys' of 'La Ville radieuse'. Instead, the apartment provides a sense of the recalcitrant stoicism of its creator, fused with sporadic bursts of strategic playfulness. Rubbing shoulders with titanic stadia and swathed by sweeping vistas, the Immeuble Molitor is a testament to a life lived simply, according to function, principles, and vision.