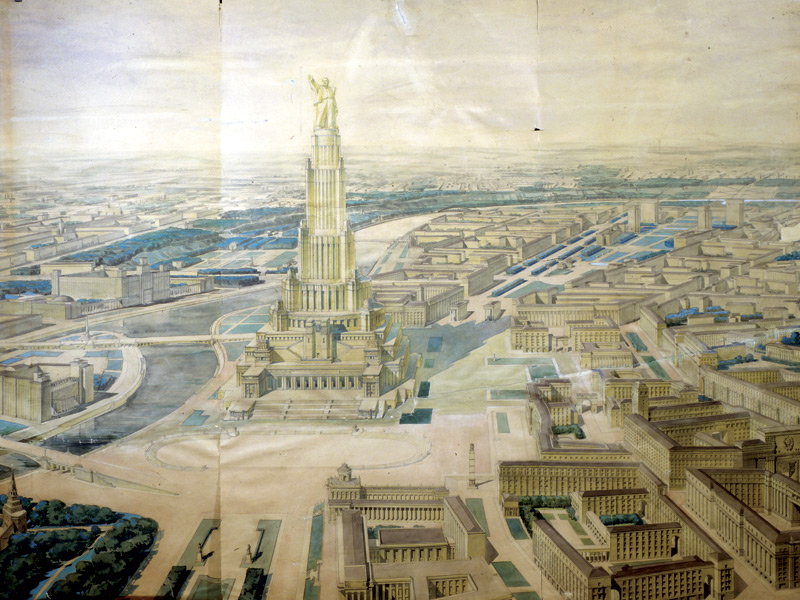 A new exhibition at the Design Museum in London explores six unbuilt architectural landmarks in Moscow, imagined during the Twenties and Thirties following the Russian Revolution

'Stroim', proclaims a heroic Thirties poster by Valentina Kulgina in the Design Museum’s Imagine Moscow exhibition. It means ‘we build’, which is what London-based graphic studio Kellenberger-White and Berlin-based architects Kuehn Malvezzi have been doing, to create respectively the show’s graphic identity and structure.

Imagine Moscow explores the USSR’s ideals of a new sort of society in the Twenties and Thirties, as developed, symbolised and propagated by avant-garde designers and architects. Curator Eszter Steierhoffer says that ‘the radical ideas in the exhibition remain highly relevant to cities today’. Both practises executed relevant previous projects. Kellenberger-White (who came together at the Royal College of Art and contributed to the 2009 Blueprint Award-winning exhibition Disruptive Thinking) also worked on the Science Museum’s Cosmonauts show (Blueprint 343, November/December 2015) — ‘Cosmonauts was more industrial, this is more architectural, more flat,’ comments partner Sebastian White. Wilfried Kuehn cites his practice’s work on philosophercritic Boris Groys’ 2004 show Dreamfactory Communism in Frankfurt, which related contemporary works with Stalinist propaganda, and Alles ist Design at Vitra Design Museum (2015), about the Bauhaus. For Imagine Moscow, the architect shaped a spiral path in black space that starts with 1927 film projections and passes through zones about six iconic ‘phantom buildings’ — unbuilt architectural visions. ‘An exhibition works as a kinesthetic narrative in which the physical movement of the visitor is key,’ says Kuehn. ‘The spiral movement at the centre of our exhibition design… is of course a spatial model referring back to major design ideas of the Soviet architects.’ Kellenberger-White’s brief was to create a contemporary visual identity that respected early Soviet ethoses. There was a ‘constant back-and-forth’ between the practices, says Eva Kellenberger. Early on, she says, Kuehn Malvezzi ‘integrated our idea of the backdrop, so they couldn’t use any of the walls’. Kellenberger and White researched early Soviet projects such as Lenin’s agitprop trains, emblazoned with revolutionary graphics, and 1920 photo documentation of Vladimir Tatlin assembling a scale model of his Monument to the Third International. Although unbuilt, it’s not in the show, but it raised the sights of architectural vision, and (with avant-garde theatre) established the spiral as a Soviet motif. Crucially, Kellenberger-White looked at avantgarde theatre set design, including The Magnanimous Cuckold (1922) by Lyobov Popova and Alexander Rodchenko’s Igna (1929). ‘They used a lot of wood,’ says White. ‘We experimented with wood, but didn’t want to pastiche constructivist theatre’. White talks about ‘littering the exhibition with graphics’. They are mainly monochrome, but for marketing and publishing, the six phantom buildings were redrawn using colours from works by El Lissitzky — lilac, coral red, electric blue, black. All text is in Apax from Geneva-based Optimo Type Foundry — ‘It’s geometric, it’s contemporary, but takes clues from the past,’ says White. The biggest graphics are the backdrops. They include an 11.5m-wide sky with a colour gradient from Prussian Blue to white, drawing the eye up over its 5m height, painted by someone personally recommended by Turner Prize 2016 nominee Anthea Hamilton. Mounted off another wall is a 2.5m acrylic Sun inspired by Ivan Leonidov’s 1940s paintings The City of the Sun. Lofan’s 1934 version of the Palace of the Soviets as redrawn by Kellenberger-White, (2017) and in a huge Soviet drawing that is reproduced in Imagine Moscow, including its fold marks

El Lissitzky had brought suprematism to Soviet propaganda posters, and was amongst Kazimir Malevich’s legendary UNOVIS group in Vitebsk. His 1925 Cloud Iron — or Wolkenbügel — design followed from his work on prouns — suprematist extensions into architectural space, which was contemporaneous with Malevich’s architektons. Connecting new transport with horizontal L-shaped buildings 50m above street level, Cloud Irons would ‘iron’ the clouds rather than ‘scrape the sky’. Kellenberger-White made a 2.5m by 2.5m map to show its eight sites on Moscow’s Boulevard Ring. The Lenin Institute by Leonidov (1927) included a library, 4,000-capacity planetarium in a glass sphere, tram station and a tower frame around 70m high. It distills constructivist high-tech with its tensioned cables and conveyor belts for books. Kuehn comments that ‘Leonidov’s architectural designs for me are pivotal, not only in this exhibition but generally speaking, as architectural models we look to in our practice as architects’. To convey its scale, Kellenberger-White have drawn a 7m x 3m graphic covering a whole wall. At the centre of Imagine Moscow’s spiral is the national congress hall — the Palace of the Soviets — which would have replaced the original Cathedral of Christ the Saviour, demolished in 1931. Its design became a battleground between avant-garde modernists, including Le Corbusier, and neo-classicists. Stalin selected winner Boris Iofan, whose neo-classical 495m-high tower would inspire the Soviet ‘wedding-cake’ typology. It was also a riposte to the US — the Lenin statue (with fingers 4m long) echoes the Statue of Liberty, and it would have dwarfed the then new 381m-high Empire State Building.

The 1934 architectural competition for the People’s Commissariat of Heavy Industry — or Narkomtiazhprom — attracted heavyweight Soviet architects including Leonidov and Konstantin Melnikov. The brothers Leonid, Victor and Alexander Vesnin were leading proponents of constructivism, but by 1934, social realism was ascendent. Ironically, the Vesnins had started as neo-classicists, but their four linked Narkomtiazhprom towers were distinctly futurist. Three 3m-high lightboxes were made to present different competition entries including the Vesnins’, but only two could be placed in Imagine Moscow. The only distinct room in the show is at the end, detailing the Alexey Shchusev-designed Lenin Mausoleum built in Red Square in 1930, and the same red marble was photographed in London to make a wallpaper emulating it. Functioning of Special Shells by V. Kashichkin and A. Kolesnik (c.1940s) poster, redrawn by Kellenberger-White (2017)

Obviously, archive images, especially facsimile drawings of the buildings, are central to the show. They illustrate not just amazing visions, but the transition narrative from the intellectual innovations of suprematism and constructivism which flourished under Lenin to the social realism favoured by Stalin, who took control of the USSR when Lenin died in 1924.

He would ultimately suppress the intellectuals. Kuehn says that ‘the emancipatory claim of the young Soviet Union poses a stark contrast to the imperial claim of the Stalinist state, and this opposition is reflected in the changing design approaches in the 1920s and 30s… The exhibition will show both’. Several London shows mark the 100th anniversary of the Bolshevik Revolution, but the radical designs and their presentation in Imagine Moscow give this one a unique power. Steierhoffer says that there is ‘a playful approach’ to the exhibition design, and a sci-fi aspect — it shows ‘what the future would look like’.