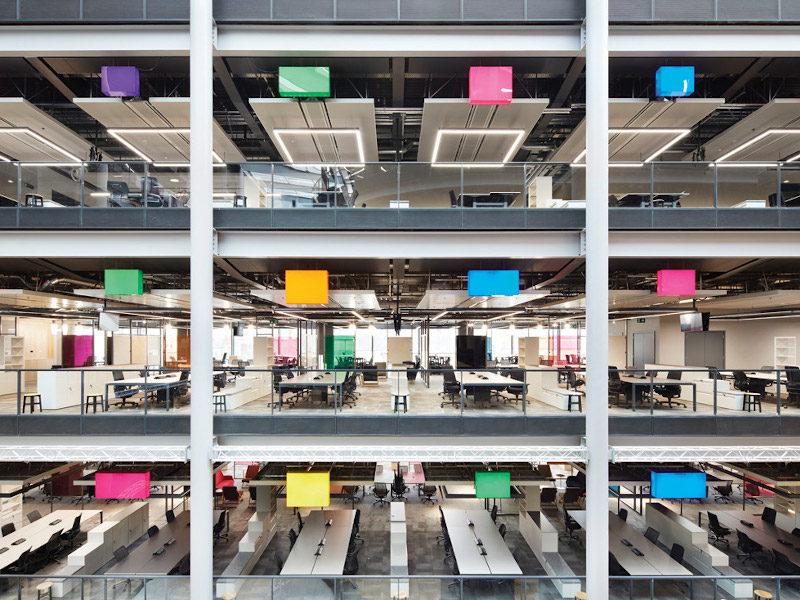 BBC Cymru Wales has moved to a new location in the middle of the Welsh capital. The BBC workplace team partnered with ID:SR on the workplace strategy to shape both office and broadcast facilities within the new Foster + Partners-designed base-build

In the reception of BBC Central Square in Cardiff, designed by Foster + Partners and ID:SR, visitors find themselves in a spacious, full-height atrium, able to glimpse the workings of the building across its four floors, while one ground floor studio is entirely visible behind curved glass. Visitors need not have an appointment either – all this can be seen from the public walkway cutting right through the building, which is located in Cardiff Central Square opposite Cardiff Central Station. The transparency of the operations of BBC Cymru Wales might be surprising, but it tells the story of the changing role of television: historically a one-way relationship, now a service where everything is on-demand and the audience are simultaneously content makers, able to comment and share responses of their own across different platforms. A key area on each floor is a circular space. Each has a curtain that can be drawn, either for a private meeting or for filming

ID:SR, the interior design group for architects Sheppard Robson led by Helen Berresford, worked with BBC Workplace from the building selection and briefing, right through to the detailed design of the interiors and the exacting structural requirements needed for broadcasting. ID:SR has plenty of experience with the BBC, having previously designed the workplaces for the BBC North in Salford’s Media City. With that work amounting to many years across her career, Berresford quips that her kids think she is actually employed by the corporation.

Introducing the project alongside Alain Bainbridge, director of workplace at the BBC, Berresford explains that a clear initial vision came from Rhodri Talfan Davies, director of BBC Cymru Wales. It was then up to both Foster + Partners as the architects of the shell and core, and ID:SR as the team responsible for the interiors, to translate it into property, and they started by laying out the necessary ingredients for a world-class BBC workplace: sustainability, readiness for a digital future, inclusivity, creativity and talent attraction. But the design process wasn’t wholly top-down, as the team also arranged extensive staff workshops and consultation.

BBC Cymru Wales was until then located in Llandaff, a suburb north of Cardiff. It was an attractive brutalist building in a lovely area with ‘lots of wonderful things’ about it, says Berresford, and the initial plan was to bring in ID:SR to assess how it might be adapted for the future. Although it was well-loved, as soon as they pitted it against the criteria of what the new BBC Cymru Wales needed to be, Llandaff failed the test. It was expensive to run, was situated away from the city, and its layout meant teams were spread across disconnected areas. The long walks between the areas were punctuated by a series of heavy doors; far from being accessible, Berresford jokes ‘you probably ended up with RSI’.

As the national broadcaster for Wales, the new HQ needed to tell a story of Welshness, not by ‘brandishing leeks or daffodils, but [through] stories that involve people’, Berresford underlines. This meant engagement with real people and having a real effect beyond the BBC’s walls. A fabric design competition was launched across Welsh colleges and universities. The winning entry by Emily O’Reilly was produced with Camira for use across furniture and acoustic panelling, while another design by Abigail Thomas was translated into wayfinding graphics by ID:SR. Pembrokeshire mill Melin Tregwynt produced fabrics for the project, but ID:SR went one step further and encouraged the mill to introduce a flock of Welsh wool-producing sheep back into the supply chain. As much as possible the project used Welsh suppliers and materials – overall 70% of suppliers in the construction phase came from within 50 miles of the building, while 85% of spending on products was with UK-based companies. Given the high specificity of the building’s needs, the masterplan and building was carefully designed by Foster + Partners, and an 'internal masterplan' was created by ID:SR and BBC Workplace. As Berresford explains ‘it was a year doing all the planning, all the “hot and heavy”’ (a term they use to describe the high-demand broadcasting studios). Also, while ‘you had to predict all of this stuff going in’ there was no room for error: ‘Studio floors had to be millimetre perfect.’ Visitors are being attracted to the new site

In non-specialist areas, flexibility is built in to encourage staff to move around the building and allow for different styles of working: firstly through the flexible floorplates designed by Foster + Partners, which then enabled ID:SR to design flexible working areas. Varied ceiling heights (due to the technical kit within them) meant it was easier to provide office sectioning with freestanding pavilions – like a ‘spine down the centre of office areas’, Berresford explains – creating more secluded spaces or housing printers and other facilities.

A key area on each floor is a colour-blocked circular space situated on a prominent curved edge next to the atrium. A series of inviting social spaces at the heart of the building, curtains can also be drawn around them, either for a private meeting or to allow them to be used for filming. As Berresford explains, these flexible spaces are both more cost-efficient and often more inviting than more formal and fixed areas. When specifying acoustic panels Berresford realised it would be sufficient and efficient to only cover 50% of ceilings with them, which has an added bonus of helping with sustainability

Guided by accessibility consultant Jean Hewitt, the interiors cater for neurodiversity to unprecedented standards. Colour and texture, clear circulation routes and the provision of calming, comfortable spaces are all important to inclusive design. Hewitt’s knowledge gave ID:SR the freedom to introduce vibrant interiors. Glass meeting rooms could be covered in graphic patterns too, and as they are visible from across the floor they act as wayfinding as well as provide visual interest; inside the rooms the effect is softened by a tinted layer on the inside of the glass.

As much as possible the project used Welsh suppliers and materials, while 85% of spending on products was with UK-based firms

ID:SR argued for a dark base colour across the building, and this works particularly well to set off the colourful and illuminated elements of the interiors. As the building is used around the clock, it is perhaps most enticing at night, when the screens light up dark galleries, and meeting rooms glow from across the atrium.

ID:SR argued for a dark base colour across the building

The other side of transparency is accountability. Berresford mentions the audit office almost ‘sitting on their shoulders’ at times, but ID:SR was confident that getting the licence fee-payer best value for money didn’t mean going for a basic fitout – the space needed to allow the BBC to perform at its best, encourage creativity and attract world-class talent. As Rhodri Talfan Davies has said: ‘Creativity is the lifeblood of the organisation. Its success with audiences in every part of Wales and across the world relies on its ability to inspire the best ideas, and to attract and develop the very best talent.’

The story behind BBC Central Square – a strong vision, engagement with local culture, local manufacturing and staff voices – is compelling, and the success of the location is visible to those employed at the HQ and to those who might just visit. Facilities teams are apparently proud to give tours, and visitors are being attracted – there were a couple of Welsh-language tours happening at the time of my visit, showing off a new workplace that demonstrates the ambitions of BBC Cymru Wales.