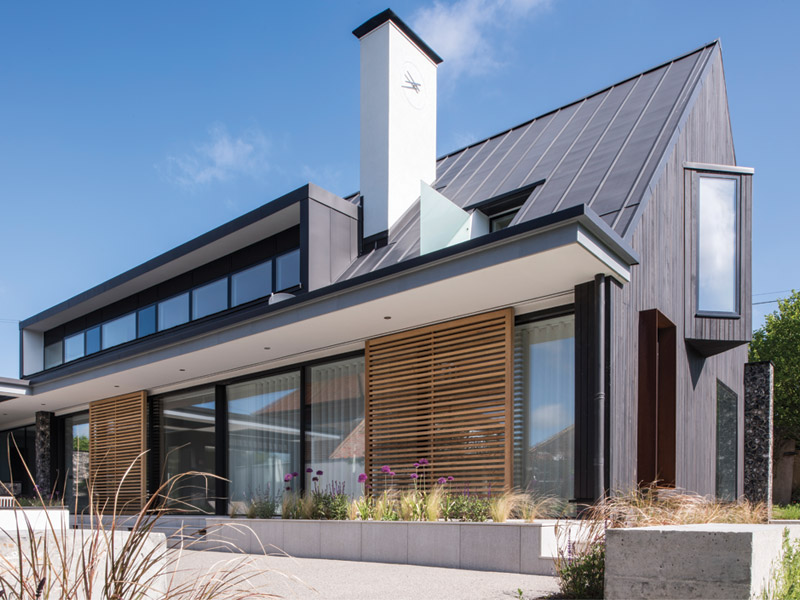 A Fifties' bungalow in the home town of Jestico + Whiles' director Heinz Richardson provided the perfect site for House 19, a new- build, carbon-neutral, energy-efficient home that encompasses the past, present and future

House 19 is a carbon-neutral, energy-efficient home that sits on the cusp of the furthest reaches of outer London and the picturesque Chiltern Hills, with its head firmly in the future and its heart in the past. In a conservation area just off the high street in the quaint, historic town of Old Amersham, its old coaching inns and water mills spanning five centuries of architecture, the house utilises traditional vernacular forms and local materials, while using the natural aspect and orientation of the site to embody the latest in passive solar principles. An accent of corten steel is introduced around windows and the front door, chosen to reflect the rusty deposits on the flint used for House 19. Image by: Grant Smith

It is home to Heinz Richardson, a director at London and Prague-based architecture practice Jestico + Whiles. With his wife Jenny, he had been looking for a rural site to build a family home for several years. After scouring the south of England, from Cambridge down to Brighton, they settled on a site overlooking the cricket ground near where Richardson had grown up and gone to school. Following an initial, failed planning application and then a successful appeal, they were finally able to knock down the existing Fifties’ bungalow and replace it with a much more sustainable, modern alternative. Seeking to create a dwelling with a reduced carbon footprint, and subsequently low running and maintenance costs, Richardson was cautious to keep in mind future needs, with adaptable spaces and a carefully considered form that would naturally aid the energy efficiency of the house, before he even started with the extra frills of PVs and rainwater collection pumps. He says: ‘It’s a house not necessarily for the two of us but for future generations, because we will probably live in it the least out of anybody. It was important to have a house that was appropriate for the site but slightly flexible, for people to make into what they want.’ House 19’s white chimney stack features a clock that can be seen from the local cricket ground. Image by: Grant Smith

The house in plan is a simple L-shape, the long axis oriented east to west to allow heat gain in winter and exclude solar radiation in the summer. A steeply pitched, asymmetric, dark zinc roof overhangs above the glass facade of the south-facing ground floor, bringing in low-angle sun in the colder months and cutting out higher angle solar gain when its warmer. The southerly aspect of the roof is used to maximise the orientation of a series of photovoltaic cells, while timber louvres can be slid along a track to modulate daylight and privacy. A thin band of galleted flint connects the main house to a smaller outbuilding, with a partially shaded courtyard in between. Image by: Grant Smith

Says Richardson: ‘We’re using the design of the elevation and the orientation to assist the energy agenda of the house, trying to stop heat gain when you don’t want it and encourage it when you do.’ The dark colour of the roof is continued in the cladding, with strips of black-stained Western red cedar, ‘to echo agricultural barn buildings’. Richardson also looked at the Japanese technique of charring timber, but found stained timber to be less shiny and more even in coverage. A thick, snapped-and-knapped flint wall wraps around the north wall and marks the front entrance - ‘it’s got solidity, firmly rooting [the house] in the history of the area,’ says Richardson. ‘When the rain or sunshine hits the flint wall, it glistens, it has this lovely pearlescent effect.’ The kitchen and dining space are separated by the mid-century-style chimney stack to create a cosy living area. Image by: Grant Smith

Elsewhere, an accent of corten steel is picked up around several of the windows and the front door, chosen to tie in with the rusty iron deposits that coat the flint stones. Across the front of the house, a thin band of galleted flint, made of fine shards of the material, connects the house to a smaller outbuilding, softening the height and volume of the big, black building from the street. This flexible, single-storey garden room, designed for guests, grandparents, carers or for use as a home office, is further connected to the house on its other side by a partially trellised roof to shade it from the sun. The two buildings create a natural courtyard, laid with resin-bound gravel that ‘acts as a giant sponge,’ allowing surface water to filter back through to the earth, and finished with concrete benches. Rainwater collected from the roof is harvested to flush the toilets, wash clothes and water the garden. Beyond, there’s a wildflower meadow to sustain wildlife and a grassy mound, created from the rubble left over from digging up the foundations, from which to enjoy the sunset. Large windows act as giant picture frames on to the garden. Inside, you still feel connected to the outside landscape, with a view from the front door right down to the end meadow and views across the main living space to the courtyard. Large windows act as giant picture frames on to the garden. Image by: Grant Smith

The huge, white, open space of the living room is divided up by an almost mid-century-style chimney stack that creates a cosy space for relaxing at one end and a dining space and kitchen at the other. The internal structure is used to moderate the energy demand of the house. A double-height space at the heart of the plan ‘works at an architectural level by uniting the two floors, but it’s also a passive stack,’ explains Richardson. ‘So on very hot days you can ventilate the house at night by opening a series of events at the top of the windows; warm air is exhausted and cold air comes in.’ A glass fronted balcony on the upper floor looks over the living space. Image by: Grant Smith

In addition, a 40m-long, earth-tube ventilation system mechanically ventilates the house, bringing air from a stack in the garden underground and passing it under the building, before coming up in the middle of the house to a heat exchanger in the roof, which distributes fresh air to the various rooms via vents in the ceiling. ‘It’s a very benign ventilation system in terms of its energy impact,’ says Richardson. ‘Normally this would be done through the walls, but if you’re taking air into the house in the winter, you’re using a lot of energy to warm it up. By taking the energy underground, it’s already heated to 12C in winter and cooled to 12C in summer, so you’re getting a bit of natural cooling.’

Heating is provided by a ground-source energy heat pump which feeds a low-temperature, under-floor heating system and also provides domestic hot water. The triple-glazed windows aid air tightness, and together with high thermal mass and high levels of fabric insulation, help maintain an even temperature across the house and reduce fluctuations. Says Richardson: ‘I’ve designed lots of sustainable buildings in the practice over my career, including a House for the Future in Wales, which was built as an experimental house. It was quite pioneering in those days, but a lot of the things in this house are now quite normal.’

Upstairs there are three bedrooms and two bathrooms. The master bedroom, at the end of the glass-balustraded balcony looking over the living space, opens up into the lofty pitched roof. ‘All the windows are considered, so like when you are in bed you can see the hills beyond,’ says Richardson, who can watch the sun rising and illuminating the church tower from one point, or the cricket in a nearby field through a carefully angled aperture from another. House 19 is a home firmly grounded in its setting, thoughtfully connected to the landscape and mindful of it’s impact on the planet.