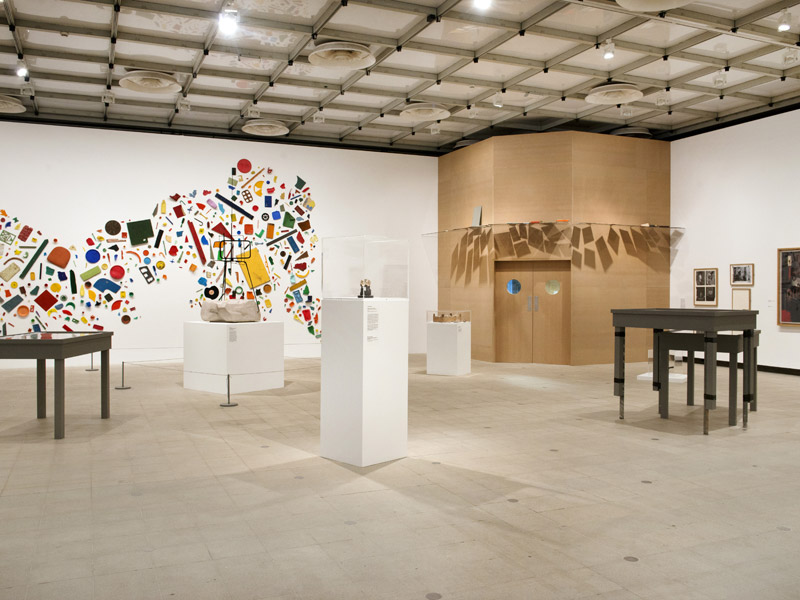 History is now is a group show in which seven artists were asked to consider Britain's post-war history, from 1945 to the present day. Each artist - John Akomfrah, Simon Fujiwara, Roger Hiorns, Hannah Starkey, Jane and Louise Wilson, and Richard Wentworth - curated one room each. Blueprint caught up with Wentworth a couple of days before the show opened to the public

Blueprint: You have shown in the Hayward before. How do you like working here?

Richard Wentworth: Oh yes. I've worked here more times than I can remember. I think the space is really interesting. I watched it being built; I came to the first show. The funny thing is, of course, the whole point about history is the erasing of things. I can't remember what was here before, and today when I come here I think, 'Oh, they've changed that'. It's a place which is thoughtful -- you put your hand out and there is a handrail; it's very gracious.

The Hayward opened during the summer of 1968. What was it like at that time?

Oh, it was optimistic, it was brilliant -- we're here, it is now, this is great! And we hadn't been in the war, so we didn't notice that a building like this might have been in conversation with the Atlantic Wall. I mean, I'm not even sure I knew what the Atlantic Wall was at that time [the extensive system of coastal defences built by Nazi Germany along the west coast of Europe]. Tate Modern really just wrecked this -- not on purpose, but it was like Harvey Nicks arriving when this was a really nice corner store. This is a sprawling show: were the artists choreographed, arranged in order of age or chronology?

Well, beginnings are important... But I'll take you through to my bit. There's Simon Fujiwara, very frontal collisions, this corporate, Ocado-aesthetic. I think there is something to do with consumption that it is going on, something to do with disengagement. Then we have the Wilson sisters, about 15 years older. Then Roger Hiorns is here... with the history of bodily fluids and CJD. I'm being a bit cheeky... but you're coming in through the cow's muzzle, being driven, mooing, down into the museum space.

Then there's a photography selection from Hannah Starkey, and these films from John Akomfrah. Everyone was given a patch, and no one really talked to each other, as far as I know. Tell me about the Bristol Bloodhound surface-to-air missile, which is mounted just outside the gallery window. You can't see it, but there is a steering wheel on that, and a little button that says ignition. This is really an achievement to have here, from the Norfolk Air Defence Museum. It came out of a conversation where thought I wanted a V-2, designed by Werner von Braun. This is a serious weapon of death, but it's lost its meaning and we're sort of stroking it.

Well, that's where it all came from. A V-1 landed on the Southbank, only I got muddled and thought I wanted a V-2... and stitched into that is this Cold War Werner Von Braun story. The Americans got the personnel and the Russians got the data... I mean, that is GPS basically; all our telecommunication comes from there. It is a funny feeling to have it here, on this damaged piece of London, still pointing east.

There's a collection of objects in this specially constructed airlock, between the gallery and the missile. Is that all yours?

This room is all the Bloodhound and things to do with it. Well, they are my acquisitions; we happened to find things and then they fitted. That's no different to acquiring stuff throughout your life. I mean, there probably are people who plan all their acquisitions -- maybe that's very modern. But we acquire friendships, relationships, incidentals, accidentals, and that's what makes us who we are, of course.

Tell me about the immersive wall of photographs. Where are they from? What is interesting about this is that about seventy per cent is from the Archive of Modern Conflict, a very unusual archive of things from, I would say, spaces of friction. So really, some horrible stuff -- you can predict what stuff will end up in there from today's warfare, people being beheaded... But this is all archival stuff, pre-internet. To give you an example: I was given two sandwich bags full of photographs, all annotated with these dry quips. You gradually realise it's one person... probably a young boy and you realise he was in the Normandy landings... I'm hoping that people will behave in a similarly discriminating way. They'll see his note here, and somewhere else, and then start mapping in their own way.

Mixed up in here is some press stuff... and things like this -- my own iPhone photographs looking at something in the British Museum. Very ordinary. I notice the captions around the Henry Moore sculptures are in slightly odd places.

Getting people to look is really interesting. Yesterday, someone who is very bright was asking me why we wanted to put the caption around the corner. The answer was that I wanted people to have that very short moment of just looking first, just looking and having an experience before the label. Everyone has a smartphone; if people want the full data on something it can be found. I like things that you inhabit, rather than things that you carry out; that slow unfurling where you never quite get to know something... It has been difficult maintaining that attitude within an institution, but I like the journey, the process.

Can we relate this idea of journey making to history itself? Because history is not a succession of facts like points on a route, but a narrative construct.

The only thing that makes things 'fact'... is a product of other facts and fictions. And pretty quickly you're off into why decisions were made, how feelings are formed. This is why history should be such a gorgeous thing to teach. It's something to do with a 'point of view' - that great expression. You can't see things from someone else's point of view, and that has been a great pleasure, a great friction in working on this show. Was the task of the exhibition more to map your historic acquisitions, then, or is it more to map your point of view?

I think it was more that I was shown some collections and quite quickly went 'shopping'. That sets up conversations about what you want to see together, and then you start noticing that there are some quite powerful things being said. The two Paul Nash paintings are unbelievably good. This one of the Battle of Britain, which I wasn't in, but which I heard about... People would watch the theatre of it, just like people watched 9/11.

What was really important to me was a particular 1944 Ben Nicholson painting -- I think we may even say, June 1944, with an aerial view out of St Ives... there's this object that looks like a Conran mug: it's actually a Union flag. And suddenly you realise that, oh no, that's a flag on a boat, and you realise while he's painting that there are people drowning on the beach in Normandy.

So, let's talk about the beach for a moment; it seems to be a theme, if there can be one, in the pieces you have selected.

I don't really like the beach. I am happy to go for a walk, but I don't like sand in the bum! ... But then I suddenly realised what an activated space it is, because it's an edge.

So I've always thought these Robert Capa photographs were so extraordinary... somebody put the negatives in the drying cabinet and cranked up the heat. So there are these very painterly, sensual kind of photo-Goyas of jolly bad things -- mostly people drowning in their kit. It might look like it was hung very low, but we forget the person was lying in the surf shooting that photo.

Then with Richard Hamilton -- in one image, one is slightly tempted to guess that we're looking at blood in the water, but then you look at it closer and it's actually leisure, so you get this line being blurred between war and pleasure on the beach...