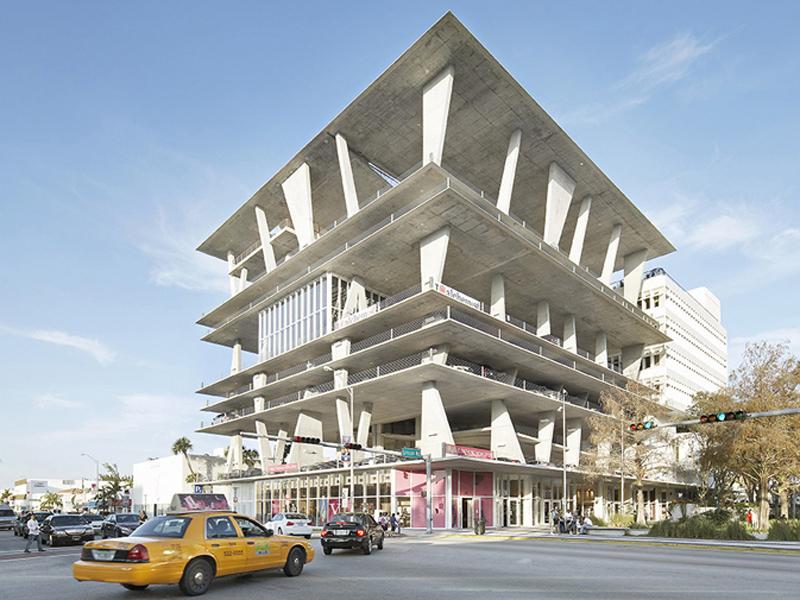 It has its own fashion boutique and tropical garden, has hosted weddings and has been likened to a giant house of cards - now Miami parking garage 1111 Lincoln Road by architects Herzog & de Meuron has been named the World's Coolest Car Park.

The striking building in Miami Beach has come top of a shortlist of 10 cool car parks in the competition run by Stress Free Airport Parking and FX magazine.

Described as the most radical work they've ever done by the Swiss architecture firm - whose projects also include Beijing's Bird's Nest stadium (designed in collaboration with artist Ai Weiwei) - 1111 Lincoln Road went up against some of the world's most spectacular places to park, including one in Detroit that has given new life to part of the beautiful, abandoned Michigan Theatre and a subterranean car park in Lyon that uses a giant revolving mirror in its base to harness light from the sun.

Completed in 1926, the Michigan Theatre closed in the Seventies and is now a car park. Photo: Bob Jagendorf

Other contenders for the title included The Eureka Tower Car Park in Melbourne where signs painted directly onto the walls and floors in the style of Swiss artist Felice Varini are legible only from certain angles, so that they come into view at the precise moment motorists need to see them.

Miami - twice voted the US city with the rudest drivers - can at least be proud of its car parks: it was the only city in the world to have two in the top 10.

But the UK didn't lose out: Birmingham's blue-glowing Millennium Point by Urban Design (now Acivico) and Sheffield's RIBA award-winning Charles Street car park - AKA the 'Cheese Grater' - by architects Allies & Morrison both made the shortlist.

FX assistant editor and DesignCurial editor Jamie Mitchell, who helped choose the winner, said: 'With more than a billion cars on the world's roads, it's hardly surprising that some of our best architects have turned their talents on the humble car park.

'While most of us still have to settle for parking our cars in utilitarian concrete hulks, the 10 car parks in this shortlist show how imaginative and innovative these buildings can be.'

Mitchell continued: 'The winner - Herzog & de Meuron's 1111 Lincoln Road - is a brave work of architecture that shows off its function rather than attempting to hide it. With no exterior walls, the cars parked inside become an ever-changing feature of the building - and the open design means it also gives great views over the city.

'But as well as being a bold, striking structure, this is also a carefully thought-out, multi-faceted work of architecture that brings together retail, parking and leisure facilities. Much more than a car park, it is now an architectural icon that's beloved of those who use it - there have even been weddings and yoga classes there.'

Completed in 2010 the open-air structure has no exterior walls; instead its concrete floor plates are supported by buttresses and cantilevers, with floor heights varying from 8 to 34 ft. Lifts and a central winding staircase take drivers to and from their cars. A glassed-in fashion boutique, sits on an edge of the fifth floor and there's more retail space at street level. Developer Robert Wennett even built himself a penthouse apartment in the buildng that also features a pool and gardens.