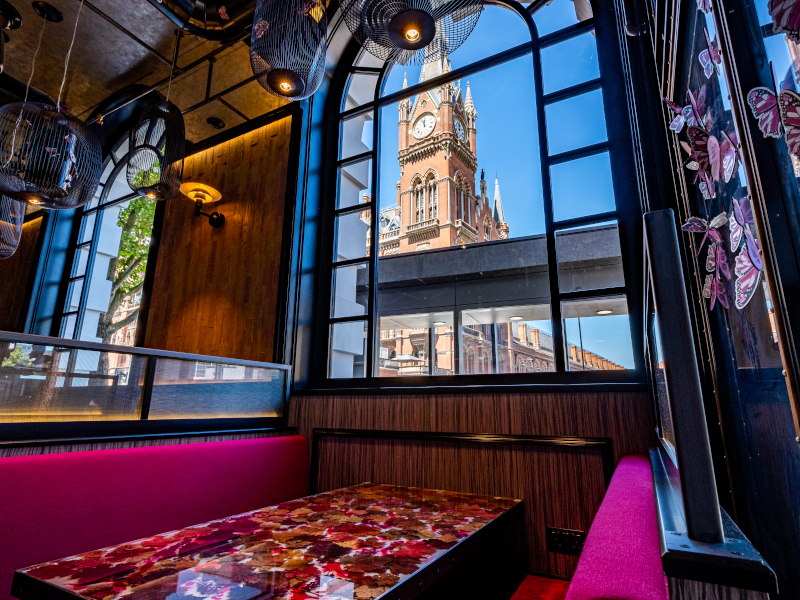 The new restaurant near King’s Cross was designed to tell a story, inspired by its 19th century cultural heritage

‘IT’S A POSITIVE discombobulation – a journey, a trip. It’s escapism.’

He’s certainly not held back. With its celebration of industrial architecture, energy infrastructure and chemical innovation, not to mention a flight of butterflies, Magenta is a highly memorable experience even before you start eating.

The restaurant is one of several projects that Chebaane’s creative agency, Blue Sky Hospitality, is working on for the owner of the Megaro Hotel, which rises above it. Talking to Chebaane about Magenta, it’s clear that the immersive design is driven by his passion for the area’s historical context. He has, he says, spent several years researching it – and is so captivated by it that he’s currently working on a trilogy of novels rooted partly in the area. Chebaane, who moved to London from Paris more than 30 years ago, is particularly interested in the industrial past of King’s Cross, and the transformative effect of innovations such as gas-powered lighting systems. He is also fascinated by chemical invention, and by how scientists from the area accidently discovered synthetic dyes as a by-product of the local coal/gas industry. The railway heritage is another interest, with the restaurant situated close not only to King’s Cross (his favourite) but St Pancras and Euston stations. Drawing on all this, he speculated on what a pub created by the engineers and scientists of the Victorian coal, steel and gas industries might look like, if updated for today. 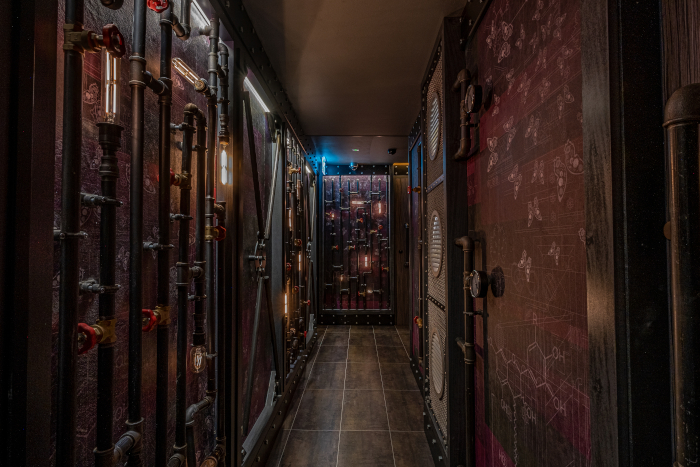 All this, and much more, feeds into the design of the restaurant, which occupies a corner site that was previously a bank. Chebaane made the most of the generous 4.5m floor-to ceiling heights, removing a mezzanine level to reveal the full glory of the arched windows, which had previously been compromised by the extra floor. He also made the most of both the lofty dimensions and the ceiling – to his mind one of the most valuable parts of the space – by ‘landscaping’ it with silver paint and an array of industrial-looking, large-scale ducts and pipes that house the restaurant’s air conditioning system.

At the bar, these are joined by a substantial pergola of timber work, with a criss-cross structure that’s a nod to the famous King’s Cross gasometers and a reference to the key role that gas had in driving industry in the area. Additional, smaller pipework runs around the perimeter of the room at a lower level, sometimes with valve details, and on furniture such as trolleys. Along with the many mirrors, this homage to industry and the energy systems of the past also conveniently disguises any lack of symmetry in the space, says Chebaane – with so much else going on all around, that’s the last thing customers will notice. 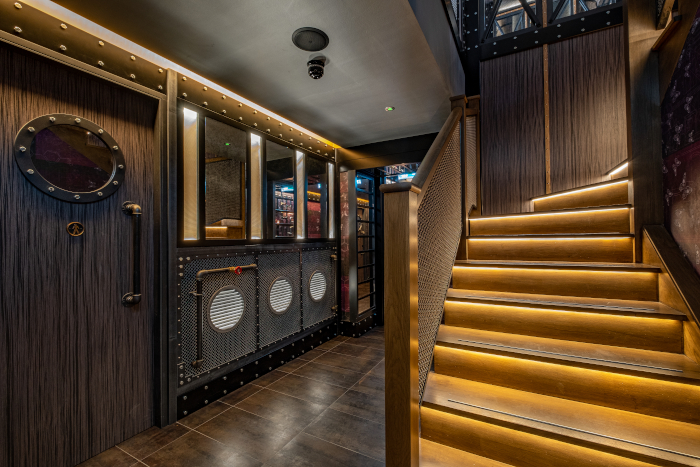 All this dark infrastructure is contrasted with bursts of magenta, used on upholstery for the banquettes (Sekers) and loose seating (Bute Fabrics and Kvadrat). A bespoke veneer of stained oak tops most of the tables, and is continued at lower wall level. The bar, and some of the tables, are zinc topped. Three tables near the entrance encase vine leaves in their resin tops, captured just as they are turning to magenta. Then there are the aforementioned 3,500 magenta butterflies, which populate the beams and ducts in the artwork Flight of Fancy, a reference to both pollination and food.

Downstairs, Chebaane turns up the volume. The stairwell down is a heady design redolent of old lift shafts and travel trunks. Once there, copious pipework runs up and down the walls as if in some sort of engine room, combined with wallpaper designed by Chebaane and referencing pipework, molecules and butterflies, and with dark veneer and porthole windows. The steampunk theme is carried through into the Mauve private dining room on the first floor – inspired by a first class railway carriage and dedicated to British women of science – and to the toilets, where the abundance of pipework combines with moody dark tiling. 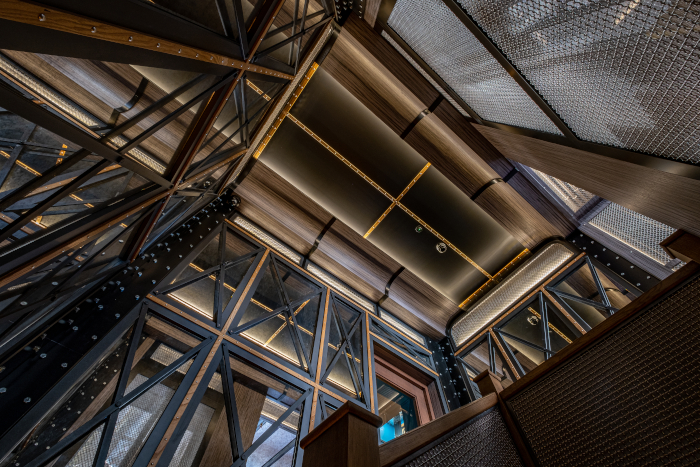 ‘I’m trying to give people a threshold, a doorway into an alternative reality – like time travel,’ says Chebaane, adding that a lot of Londoners don’t know much about the area’s industrial and scientific heritage. And with so much going on, he hopes that they will ‘notice different things on different visits’.

There’s a lot more to come, too. When I visited, preparations were under way for the opening of Hokus Pokus, an ‘alchemy’ bar in the basement designed with references to laboratories and chemists. Full of gleaming copper, this was looking fantastic, with a bar made up of tiny drawers like those in an old-fashioned chemist shop. 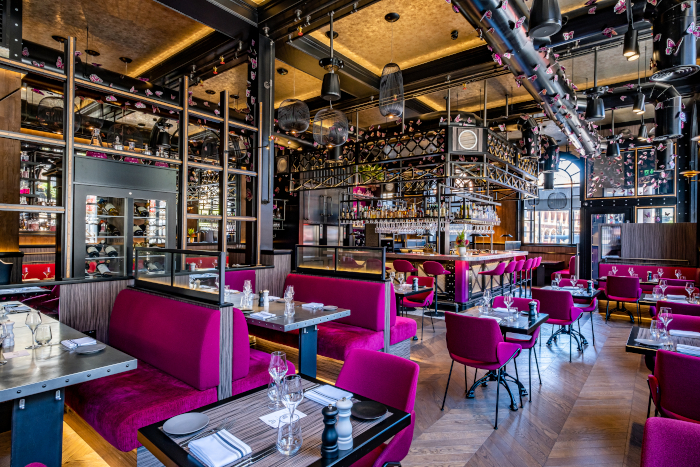 Chebaane installed masses of lights in and around the space to evoke the idea of being inside ‘some sort of a living electrical organism’.

There’s plenty of quirky touches, including cabinets of curiosities – one contains the Magic Circle art installation created around the idea of anthropomorphic mushrooms – as well as the plentiful presence of tiny ‘laboratory mice’, who in this scenario are the ones in charge. 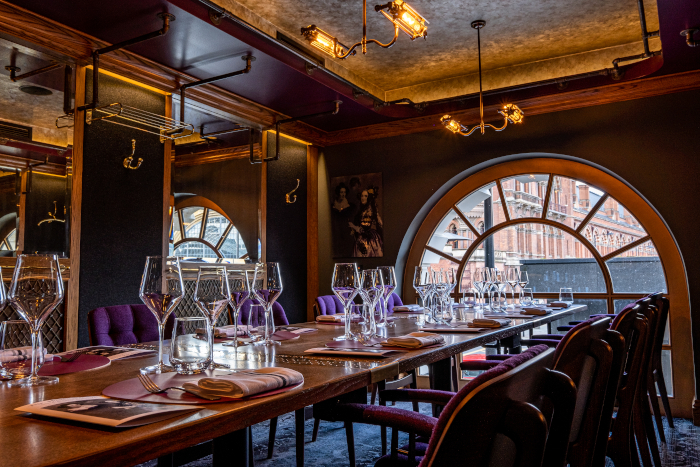 When this project is complete, Chebaane will be working on Spagnoletti, an Italian restaurant, which is part of the hotel named after a Victorian electrical inventor, Charles Spagnoletti, who created train signalling systems. This promises to be a ‘retro-futuristic space-age pasta kitchen’, which is set to open this spring.

‘For me, what drives me is storytelling. I intend to tell a story that’s unique with an individual tone of voice, and very much of its place,’ says Chebaane.