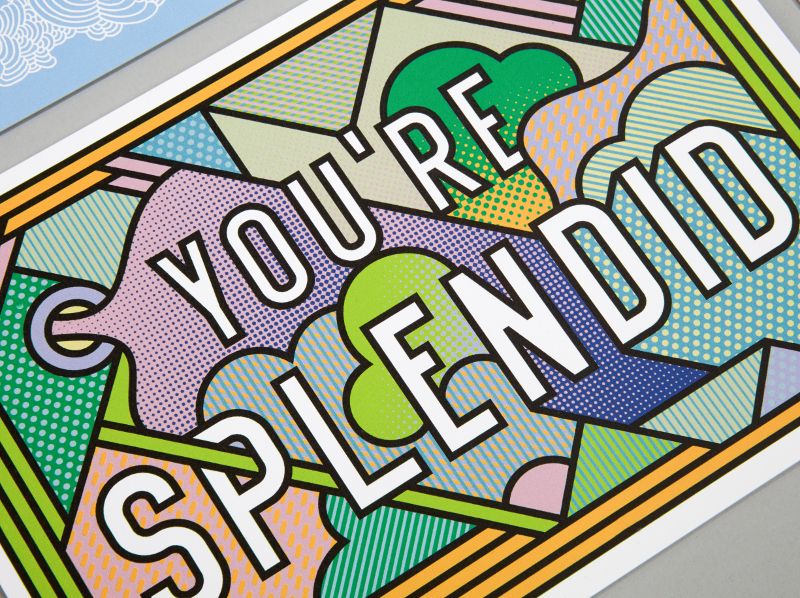 The artist, illustrator and graphic designer has collaborated with moo.com on a special project to spread joy through complimentary flyers in London and Boston - we caught up with him

We've long been fans of artist, graphic designer and illustrator Rob Lowe (AKA Supermundane) and have admired his distinctive, intricate illustrations that have appeared in some of the world's best-known publications including the New York Times & the Guardian, as well as the freer, more artisic work of his solo gallery shows. Now, Lowe has got together with online print and design company moo.com for special one-off project where he will distribute
600 limited edition signed prints being given away to the public for free on the streets of London and Boston. The limited edition flyers, designed and signed by Supermundane, were posted on brick walls lining London's Southbank on 31 July, with passersby able to take them away free-of-charge. The following day, the remaining 600 were available in the Boston Design Museum.

We caught up with the artists himself to ask him about how he had honed and developed his style over the last 15 years - and his collaboration with moo.com. Your work spans art, illustration and graphic design - apart from financially, what are the advantages of working across different disciplines? I'm trained only in graphic design, the other areas of my work have come about over time quite naturally. The advantage of this is they feed into and influence each other. I might be designing a typeface and it will give me an idea for an artwork or visa versa. It also means things never get boring.

How have your work and your style developed over the years?

I think the core approach to my work has stayed the same, I like simplicity, graphic boldness, humour, line and movement.
My work has become more distilled, with more and more focus on the effect of line and colour on the viewer. What's behind the name Supermundane - how does that relate to what you do?

The word Supermundane means 'above the world'. I found it many years ago whilst working as a graphic designer in a kettle factory in the Midlands. I've always liked the fact that is sounds like it means the opposite to what it actually does. It's been a useful way of making me stand out, especially for someone whose real name is Rob Lowe.

Can you tell us a bit about how you actually create the work?

It depends what I am doing. If it's a drawing I tend to not have a plan, at most I'll have a shape I want to work to. Paintings are much more planned and I will know exactly how I want the finished piece to work. When I'm working on the computer I often don't have a plan and it's a case of added and taking away until I'm happy with a composition.

As an illustrator, is it important to establish a strong, recognisable style? And can it be difficult to change/reinvent your style once you've established it? I think you need to have a reason for someone using you instead of someone else. This could be style, but it could be more of an overall approach or voice. A couple of years ago I started working with more colour and pattern which might appear quite different to my organic drawings, but they come from a similar place. This approach now runs in parallel to my more signature style and design work and adds more variety. I think you can change your style, or add new ones, as long as it makes sense to your overall practice rather than it being purely a fashionable veneer.

What advice would you give to illustrators starting out?

Is there a particular piece of work that you're most proud of?

I do lots of different things so picking one would be pretty impossible. I really like a set of artworks I did called Rounds. They were the first time I reduced my drawings to very simple compositions. Out of the four I produced I think two are pretty much as good as I could ever make them.

Which artists/designers have influenced you?

What are you working on at the moment?

I have a solo show called Stupid Nature opening at Beach London on the 7th August. It consists of large two colour drawings that have a lo-fi op art feel. They are a lot looser than my normal work but the basic approach is the same. I'm then in Morocco on an artist residency as part of the Assilah art festival for a while and on my return I have another solo show at No Walls gallery in Brighton opening on the 29th August.

Can you tell me a bit about your project with MOO.com? The project is based around making art out of the everyday and the power of compliments. By making the flyers signed and limited edition it takes something that could be throwaway and makes it into something to keep or put on the wall. The words are linked to my 'I think you are wonderful' phrase which I have used in various ways over the past few years. We all love receiving compliments, they are simple and can have a real positive effect.