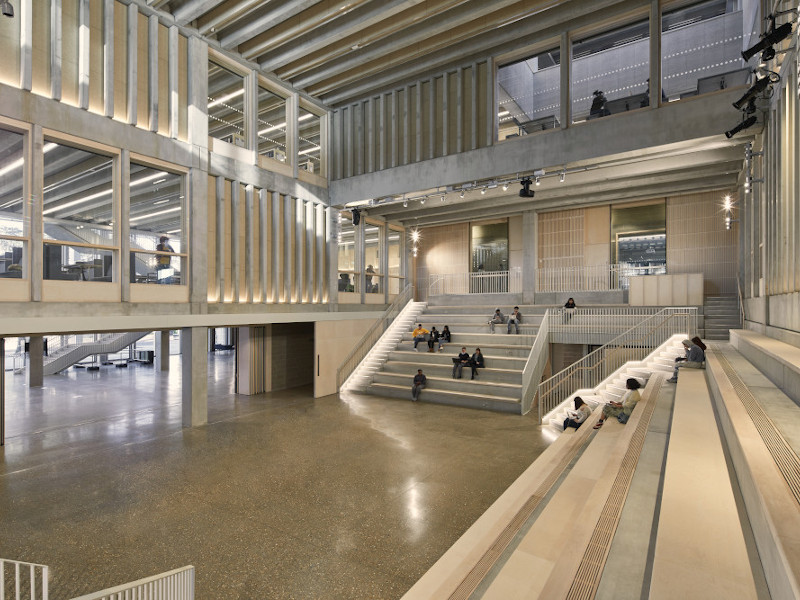 Architecture for universities is currently a matter of big budgets and starchitects, the latter brought in to design a building spectacular enough to crank up student numbers. Grafton, recipients of both the RIBA Gold Medal and the Pritzker Prize for 2020, would fit into this category, and its £50m design of Town House – a teaching building for Kingston University chosen via a competition put out by the university and RIBA in 2013 – brings Grafton’s lauded skills to a suitably ambitious project. The interiors are a pale, exposed concrete, chosen to reflect the architecture found in the borough of Kingston-upon Thames

Town House has five stories on the street-facing side, with a roof that steps down gradually towards the rear where it faces onto residential roads. Elements of this form echo Grafton’s University Campus UTEC Lima in Peru, but the scale is less colossal here – Town House is not imitating a cliff-face or sheltering its students from a busy motorway – and instead matches the scale of Surrey County Hall, which sits opposite.

Inspired by portico-fronted buildings of European architecture, the facade is made up of vertical columns that create a porous boundary, with a cloister at street level, and terraces, external staircases and hanging gardens above. The columns are made of reconstituted stone, similar in appearance to the county hall’s Portland stone. This porous facade is meant to break down the divides between ‘town and gown’ – one of the main points of the brief. Unusually, the public are welcomed into Town House, and have full access to its library, which includes Kingston Council’s archive of Eadweard Muybridge, the pioneering photographer and one of Kingston’s most famous former residents, which is housed there on the condition of this public access. This relationship between the public and the university is one of the reasons for Grafton describing the brief as ‘radical’ and ‘certainly one of the best briefs that we had seen coming into our office’. Movement throughout the building is meant to be intuitive, meaning there’s no need for overt signage

The building’s intended use – containing both the university library and the home for its dance faculty, spaces with diametrically opposed requirements, says Grafton director Gerard Carty – was an ambition that also impressed the architects: ‘In our view [it] was transformational in terms of how the university was going to see itself in terms of [being] an education provider.’ Carty adds: ‘[It was] provocative and I think it provoked us as architects to think about this building and what it might be.’

While over 50 per cent is open plan across 9,400 sq m of space, Grafton’s design was principally planned around a series of volumes: the triple-height foyer, a three-storey auditorium space, dance studios and studio theatre, library learning areas, and two cafes. These volumes are then arranged across a ‘learning landscape’ – a term from the brief that Grafton thought provided an apt metaphor.

Movement across this landscape is meant to be intuitive, without the need for overt signage. Sound plays a part in this; as Grafton co-founder Yvonne Farrell describes: ‘As you move towards the volume of the staircase, you are attracted by the sounds and voices of others, so there’s a kind of volumetric soundscape… [students] know, literally, where the buzz is.’

‘We didn’t need to worry at all – [students] immediately found everything and they found it the way that they wanted to,’ adds Sean Woulfe, Kingston University’s director of estates.

The main circulation route is a cantilevered staircase zig-zagging from the foyer through an atrium up to the top of the building. Alternative routes are minimal – the lifts are accessible but tucked away, while loggias across the east-west side provide an external set of stairs, which also function as a fire route. The only other internal staircase is there solely to provide dance students with a backstage entrance to their performance space. The largest (semi-)enclosed space is ‘The Courtyard’, which might more conventionally be called an auditorium. Instead of a closed-off and underused black box, as auditoriums often are, this large light-filled area will be open all the time and is suited for informal use, its rows of benches fitted with powerpoints. Its name comes from the way it cuts through three floors – like a courtyard. It is open to the outside via a ‘minstrels’ gallery’, and doors fold back to open it entirely to the foyer on the ground floor, while above it’s looked in on via glass cut-outs across the upper floors. Given the proximity of dance spaces to the library, much attention was paid to acoustics. Among Grafton’s pared-back interiors of exposed concrete rib slabs, acoustic panelling is laid neatly within. To protect against bass-heavy music travelling to the library, or to the neighbouring streets, the dance studios were constructed as ‘boxes within boxes’. The double-layered glass windows within the walls mean that while these diverse activities are acoustically sealed from one another, they are visible. It was, Farrell says, ‘all totally possible in architectural and building terms’, although she suggests it was reliant on a certain bravery and attitude on the client’s part.

Farrell reflects positively on the decision to keep the competition jury on board throughout the process to ensure that ‘the quality that you had seen in the competition was something that survived... in terms of competitions that’s a very, very unusual thing’. While the design realises the qualities Grafton values, measuring the success of the project won’t be fully possible until more time has passed – at the time of writing it has only been open for three weeks. Already occupancy numbers speak volumes, with an increase from 345 people using the old library to 6,000 using the new building. Although the library has grown 40 per cent larger in terms of seat numbers, and is complemented by ‘ledges’ for informal working, perhaps the worry now is that Town House will prove too popular.