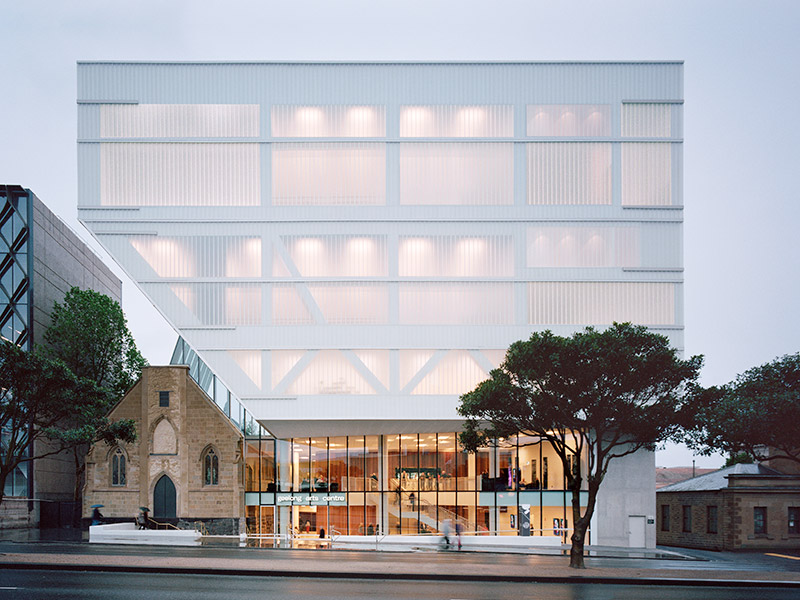 Located in the Australian state of Victoria, visibility and accessibility were the key priorities of a project that feels at home in its environment despite boasting a striking form

Coinciding with the completion of its New Museum for Western Australia in the country’s capital, Perth, Hassell has also been busy on the other side of the Australia, with the redevelopment of an arts centre for Geelong, a port city 75km south-west of Melbourne. The Geelong Arts Centre, which opened in December 2019, is a project a little closer to home, as principal Mark Loughnan explains: ‘Growing up in Geelong and now seeing Geelong Arts Centre’s Ryrie Street building come to fruition has given me an immense amount of pride. It’s not often that you get to work on international projects and use that experience to deliver a project such as this.’

The history of the arts centre goes back 38 years, when it was first built after locals lobbied and fundraised for it. In the intervening years Geelong’s cultural scene has grown, and the city joined the UNESCO Creative Cities Network in 2017. Now, the redeveloped Geelong Arts Centre is only one of a series of new projects, including the new City Library, hoping to boost Geelong’s cultural offering.

Visibility and accessibility were the key priorities of the project. Hassell needed – explains Adriano Denni, a senior associate at the company – ‘to deliver a new Ryrie Street entrance foyer and forecourt, creating a civic presence and address on Geelong’s main street – a visible symbol of the cultural precinct and a new public identity for the arts.’ Before this stage of the redevelopment the arts centre was accessed from a small road, rather than the main one. The facilities needed to be made universally accessible and circulation made clearer.

Hassell established this new public identity for the centre with the building’s unusual translucent facade and the striking top-heavy form, with its cantilevered upper floors ‘floating’ over a historic church. Standing in quite a different style to the adjacent buildings, the architects believe that it is nonetheless ‘immediately at place within this great city’. An external wall of the church is visible from inside the arts centre, exposed to the public foyer, while a new door has been carefully inserted into one of the original church window openings

The translucent white form of the building also blends in subtly with the white, cloudy sky behind. This was intentional, as Denni explains: ‘One of the key design decisions was to adopt a restrained palette of materials, and to explore the notion of varying degrees of transparency. The restrained palette allows the activities within to be the hero – people and movement activating the building, set against a subtle, sophisticated backdrop of materials.’

On the upper floors more of a barrier is maintained, with the translucency only ‘hinting at the activities within, yet affording privacy and limiting distractions’. On the civic scale, however – the materials of the building envelope changing as it moves down – the transparent glass of the lower levels aims to be as open and inviting as possible to passersby. Acting only ‘as a weather barrier’, Denni explains, the glass affords views into the two-level foyer and bar, while materials such as flooring continue from the forecourt to inside.

The upper floors maximise the available space, and at the widest point where the floors extend above the church below, Studio 4 was able to replicate the dimensions of the centre’s Playhouse theatre’s main stage, enabling full scale rehearsals to take place. The other studios, in a range of sizes, explains Denni, ‘provide opportunities for a broad Geelong Arts Centre programming approach, ranging from dance, to exhibitions, to potential other uses such as weddings. The scale of the spaces also opens opportunities to hold smaller, more immersive performances in their own right.’

These studios are then supported by lobby, kitchen and greenroom spaces. Beyond the centre’s core performing arts facilities, co-working spaces, named the Creative Engine, were incorporated into the design and developed during the construction phase.

The approach taken to working with the church was to incorporate it better within the masterplan and stage two building. Hassell considers this a really important and enriching aspect of the project: ‘We felt that this element would add architectural interest and links back to Geelong’s heritage, resulting in a much richer streetscape and precinct.’

Hassell worked with Purcell for the careful restoration of the church’s damaged fabric. Externally, an extension of a building that previously hid the church was demolished, while stonemasons reconstructed destroyed buttresses, coping and stonework, replacing elements where necessary. An external wall of the church is visible from inside the arts centre, exposed to the public foyer, while a new door has been carefully inserted into one of the original church window openings. The interiors use a palette of white, polished concrete floors, and white concrete columns and walls while the facade uses varying degrees of transparency

The interiors otherwise use a simple palette comprising white, polished concrete floors, white concrete columns and walls, and mesh ceilings. Accents of timber and brass are used on ‘tactile components of the buildings’, while at the rear of the foyer a waved wall of timber battens is inspired by the folds of a stage curtain.

Preceding this phase of the project, the 750-seat playhouse theatre was redeveloped in 2010, while a stage three has been announced to transform the Little Malop Street end of the complex, expanding on the facilities further.

Hassell’s work for phase two, however, has done much already to create a physical landmark for this cultural hub for Geelong.