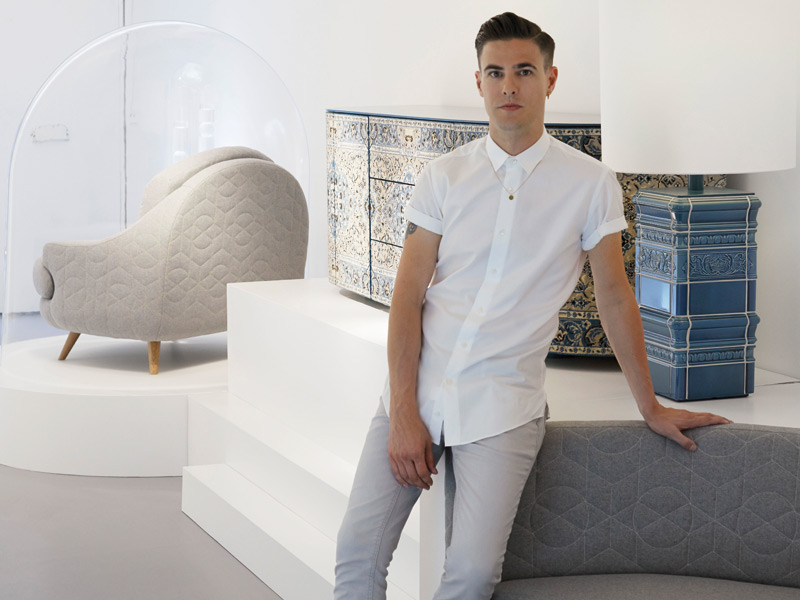 With an open invitation to work as an intern for Vivienne Westwood, products and interiors designer Lee Broom thought a career in fashion design might have been his calling...

Since graduating from university in 2000, Lee Broom has become one of the UK's leading product and interior designers, scooping more than 20 awards, including British Designer of the Year Award in 2012. This year he adds the Queen's Award for Enterprise, International Trade, to his ever-expanding list of exceptional achievements.

I met Broom at his eponymous store, next to his studio in Shoreditch, during this year's London Design Festival. For LDF it became 'The Flower Shop', featuring displays of more than 4,000 fresh flowers to promote Podium, Broom's first-ever collection of vases. Broom is renowned for his interior spectacles, which typically surround a product launch -- for example his award-winning (and most talked about) 'The Department Store' in Milan earlier this year. For this, he took a row of disused shops and created his own department store to launch 25 new pieces. Part of The Flower Shop installation at his eponymous store, during this year's London Design Festival. Photo: Luke Hayes

He says that drama and theatre are present in his work 'inherently': he was a child actor. But how did a one-time member of the Royal Shakespeare Company become Dame Vivienne Westwood's protégé, then reach dizzying heights in interior design? During our meeting, Broom tells of the drive to work for himself and the unconscious influences on his design work.

'It's [present in my work] because it was part of my childhood, my growing up,' begins Broom as we walk around his store, replete with the spectacular backdrop of floral displays playing host to his products. 'The drama of that background comes out in my products and presentations; you write them with a theatrical element to them and I like to create experiences rather than just a presentation.' Flower arrangements were used to set off Lee Broom's Podium range of vases -- he had sent his design team on a flower arranging course. His Hanging Hoop Chair (above, left) sits over a carpet of red roses. Photo: Luke Hayes

His artistic father taught the young Broom how to draw. He recalls how weekends would be spent sketching buildings, a childhood fascination. His mother nurtured his theatrical side and enrolled him in a theatre school. While at school, Broom became interested in fashion design and aged 17 entered the competition for Young Designer of the Year, which he won. It was a turning point for Broom. Inside the store during its The Flower Shop period. Photo: Luke Hayes

'Vivienne [Westwood] was one of the judges for the award and I got to meet with her and she invited me to her studio for a couple of days,' he says. 'She told me about what inspired her and how the business was run; having the close contact with her was incredible.

After the two days I showed her my portfolio and she said: "Well, look, you can stay as long as you want, as an intern." I was like, OK, I'll stay then!' Inside the store during its The Flower Shop period. Photo: Luke Hayes

Working at Westwood's iconic British fashion house for a year inspired Broom to do a fashion degree at Central Saint Martins. Through meeting and working with Westwood, Broom's objective became to run his own business, which he assumed would be in fashion. 'The plan was to be a fashion designer, but more than that I wanted to start my own label, I so wanted to work for myself,' explains Broom. Nurturing a growing entrepreneurial flair while he was still a student, Broom would seek out local businesses to offer his advice and services to. Little did he know then where it would lead. 'I used to go around to bars and restaurants and ask if they wanted any decor advice,' he says. 'I used to make curtains and mirror frames, and eventually I started to build up this very small business by doing this on the side. But just after I graduated Central Saint Martins I was asked to design a whole bar.'

The 1,580 sq m Nylon bar and restaurant in London's Moorgate remains Broom's largest project to date. After its launch in 2002, it was heralded as a big success and picked up the Evening Standard Bar of the Year Award. 'That project was like an intense training course on interior design, but on a live project. It was really challenging!' says Broom, who completed the project with the help of a university friend. 'We learned so much, and I think because we had no formal training in that area we had no expectations -- we just went for it.' Broom decided to move away from fashion which he says wasn't a difficult decision. His drive was for founding a creative business that made money, and designing bars seemed to be doing this. In 2007,he launched his first product range under his own name and has since released more than 75 furniture and lighting products -- and he champions British manufacturing techniques. And when looking at products such as the Salon furniture range (2011) and its distinct 'punk-rock couture', I can almost see Westwood sitting there.

Broom's story is likely to resonate with those who 'ended up' in a job without any previous experience. I wonder if a different approach to conventional education is what (sometimes) is needed? Broom says that his theatre-school days provided him with drive and competitiveness, which gave him confidence. 'It's one thing creating a product, but going out and selling it, well it's hard,' he says. Broom's products are now sold worldwide -- in more than 120 countries.