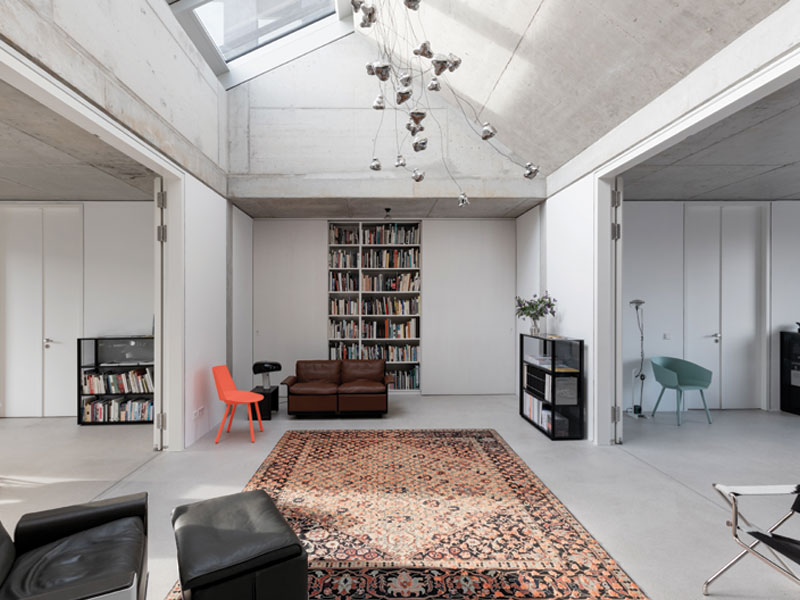 Just a block south of Checkpoint Charlie is a long, new building called Frizz23, by local practice Deadline Architekten. With burnt wood facades and a modernist form with no less than four different roof levels, it’s a distinctive presence in Berlin’s cityscape. But what makes it really special is that the project was approved because Deadline — with a history of urban activism and in partnership with vocational training organisation Forum Berufsbildung — came up with an innovative formula that highlighted political change in the city’s development strategy.

Selling sites to the highest bidding developer has been rapidly gentrifying Berlin, and public discontent was vocal. At Frizz23, the city accepted a radical, bottom-up approach: the building would host a combination of offices for Forum Berufsbildung and flats for short-term let, but between them, a base with a live/work element for small businesses who would be stakeholders in the development. Effectively, that makes Frizz23 a creative quarter in a single building.

The building takes its name from its address, 23 Friedrichstrasse, but there’s actually another recent block — the metallic headquarters of left-leaning co-op newspaper Die Tageszeitung by Swiss architects E2A — between it and the street. To the north, they both face a long-overlooked green patch called Besselpark, in an area on the northern fringes of Kreuzberg, with its demographic diversity, radical history and low-rent shops.

Frizz23 stands on the site once occupied by the Berlin Observatory, designed by Prussia’s master architect Karl Friedrich Schinkel — the planet Neptune was tracked down from it in 1846, but the building was demolished in 1912. Later, Berlin’s wholesale flower market covered the area, its vast shed now home to the Michael Blumenthal Akadamie, with Libeskind’s Jewish Museum (1999) just beyond it. After the market closed, its logistics area facing the park was a hot site. Instead of selling it to a developer, Berlin approved Deadline’s proposal for part of the site was approved in 2014. A Baugruppe (invest and build co-operative) was formed, including creatives who would operate in Frizz23. Over 18 months, the entire co-operative — no less than 31 of them — participated in developing Deadline’s design, with extensive consultation with authorities and neighbourhood initiatives. Construction started in 2016.

Frizz23 has 9,324 sq m of floorspace over the entire block, which is clad with bands of charred larch wood and midnight-blue aluminium panels (referencing Neptune). Its long sides have cantilevered box balconies, and on the south side, a 14m-high spiral, black steel, fire-escape staircase is mounted. A bed folds into the wall in the ARCH+ space, designed by Arno Löbbeke and Anh-Linh Ngo. Photo credit: Ana Santl

The building is divided into three autonomous parts. On the western side, adjacent to the Die Tageszeitung HQ, Forum Berufsbildung occupies a five-storey block, topped by a roof garden for its use. Next to it is the middle section, housing the creative stakeholders, including live/work units, and collectively known as Frizz. This section is the longest, in part rising to seven storeys, but with a roof garden for everyone live-working there, to be completed in summer 2019. A six-storey tower of short-term-let apartments rises at the eastern end, trapezoid in plan, with another roof garden, the highest, for its residents.

These apartments are operated by Miniloft Kreuzberg, run by Deadline partners Matthew Griffin and Britta Jürgens. It follows Miniloft Mitte, their conversion and extension of an old housing wing in Hessische Strasse, 3km to the north, completed in 2004 and now nicknamed the ‘Slender-Bender’. The Miniloft idea is basically designer flats for short-term lets, an alternative to Airbnb. In the new development, there are 14 of them, all above the groundfloor Café Nullpunkt. Light reaches a bathroom through an internal window in the ARCH+ space, designed by Arno Löbbeke and Anh-Linh Ngo. Photo credit: Ana Santl

The residences range from ‘einfach’ (‘simple’) suites from 23 sq m, where the bedroom is continuous with the sitting room/kitchen, to two ‘vielfach’ one-bed minilofts, occupying whole floors of 54 sq m. They include wood-fired Skantherm Shaker stoves designed by Antonio Citterio, giving a homely and literally warm dimension to the living room. The two slightly smaller ‘dreifach’ flats below them have two bedrooms, which with two sofas (from Innovation) can accommodate up to six people. All interior design is by Deadline, and the aesthetic is simple, mainly white with black curtains or shutters, some wood flooring — for example to define the dining table area — and exposed concrete in ceilings and columns which gives a loft-like raw structure touch. Most flats have access to balconies, which are recessed within the building line.

But the heart of Frizz23 is the Frizz middle section, the base of almost the entire co-operative. There are 38 units taken by the co-operative, and they are each tailored to their occupants. Deadline founding partner Matthew Griffin explains: ‘We worked with each of the clients in the project to come up with solutions that suited their personal requirements. A few of them had professional support from interior architects.’ The entrance to the creative section, facing the park, is flanked by the ground-floor units of a bicycle-maker and bag upcycling workshop, both co-operative members, and a gallery run by the co-operative. The units upstairs vary, from split-level spaces to small studios. The ‘urban contract’ agreed with Berlin stipulated a maximum of just 7% permanent living space across the entire Frizz23 complex, but that has allowed four units in Frizz to combine work and home. In these units, no more than a third of the space can be designated for living. That has produced interesting variations.

ARCH+ magazine occupies one of the two live/work units on the second floor, with 230 sq m in total. The interior design is by Arno Löbbecke and the magazine’s editor-in-chief, Anh-Linh Ngo, and is 30% living space and the rest working space. The living space includes a bed that folds into a wall of the living room, and a bathroom, which like interior rooms elsewhere in the block, has a window set in the wall to bring light through from a south-facing room.Ngo comments: ‘We tried to design the space, the different situations for working and living, the overflow of one in the other, quite consciously with regard to the mixed-use rule.’ Another live/ work space, a studio, is occupied by an artist, and also has a folding bed — but it counts as a pure workspace, because when the bed is up, it is just that. In fact, the artist lives elsewhere, but may take naps. And it’s not just the house rules about use of space that must be complied with — to claim tax deduction on workspace, an occupant needs to work there for three days a week minimum. Theoretically a tax inspector can drop in anytime to check. All Frizz23 occupants in north-facing units enjoy stunning views across the park to the iconic Fernsehturm (TV tower) and ranked slabs of socialist high-rise housing, rising beyond the headquarters of GSW (Sauerbruch Hutton, 1999) and Axel-Springer, the latter right up against the where the Berlin Wall stood. It is a quintessential vision of Berlin, but there’s a deeper Berlin vision in Frizz23. It is that creatives can resist the tide of gentrification and have their place in the heart of the city, to pursue their practice, and in some cases, live there as well.

This article was originally published in Blueprint issue 363. In the print version, the image credits were incorrect and have been corrected in this online version. You can buy issue 363 here, or subscribe to Blueprint