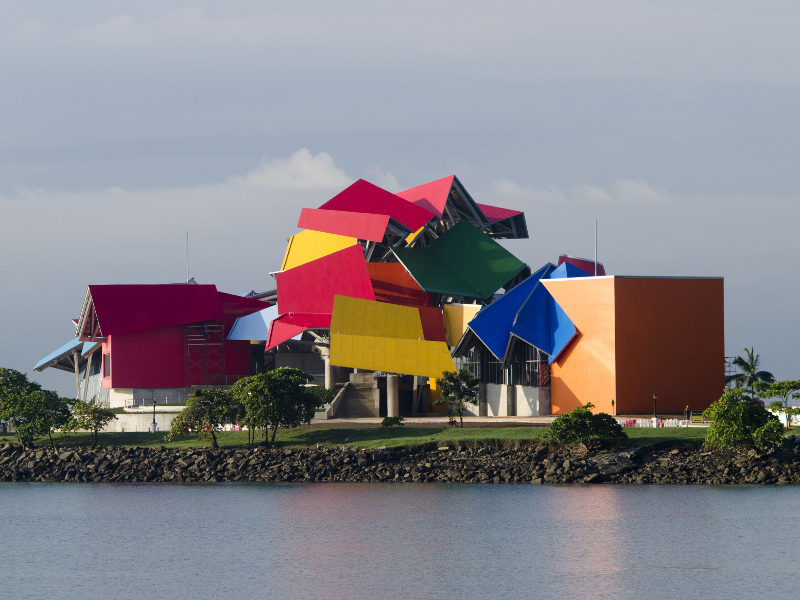 With his Panama Biomuseo project opening and other schemes being announced around the globe, Veronica Simpson caught up with Frank Gehry at the launch of the innovative LUMA Arles Arts Campus, featuring another signature Gehry building Blueprint: Tell me about the Biomuseo in Panama. That's a very different aesthetic going on there, with much bolder colours, for example. Above and main picture: the new Biomuseo in Panama, designed by Frank Gehry. Photos: Victoria Murillo

Gehry: My wife is Panamanian and we've been going there for years. The reason that it is colourful is that Panama City is a Spanish colonial city, with red tiled roofs and white plaster walls. This building is on the Panama city side. The city of Colon, which is very poor, is just 129 km away.

Blueprint: So the shanty town feel about it is deliberate -- a kind of Arte Povera?

Gehry: Yes, and they love it.

Blueprint: You and your studio clearly take great pains to experiment and innovate with forms and materials. How do you arrive at the materials you have used, for example, in Arles (stainless steel, stone and glass)?

Gehry: We study the materials for a long time. We make maquettes. The main material at this point is stainless steel. We have worked with this material before, but not like this. This is a new idea for us. [With this treatment] the stainless steel has a dappled quality, which captures sunlight and moonlight. We built a whole section of the wall in my office in California. We made it in titanium, aluminium and every other metal and this seems to be closest to the right one. We are 85% there. We need to get a little closer. We have got to build a section here and look at it.

Blueprint: It's very clear that you have a great affection for France and for the city of Arles. Gehry: I came to France in the 1960s and worked in Paris for a year. I travelled extensively, and studied Romanesque churches and art. I'm an art nut anyway. I had been to Arles many times before I met Maja [Hoffmann, his client for the LUMA Arles]. Maja showed me around the city and described her feelings. She asked me to make a painterly building, with views over the campus and the town from various levels. There is a magnificent Roman amphitheatre in the town and Roman planned cities are something I have studied and I'm certainly inspired by them but not literally. The idea of having the [glass] drum [at the base of the building] as a public space on the Boulevard Victor Hugo, this seemed like a building. Maja wanted it to be open to the public and to create a space that would be used. As you go up in the spaces, they are more private and then at the top you have a view over the city. There was a time when this city was inside the Roman amphitheatre. In some ways, we are building a drum with the city of LUMA inside.

Blueprint: What is the relationship between your building and the old train and engineering sheds in the Parc, which are going to be renovated and repurposed [by Annabelle Selldorf]. Gehry: There is a texture and culture and history here that's great. I'm glad they got Annabelle to take that part on. It's very sensitive and has to be done carefully. It's not a trivial thing. We have spent a lot of time and had a lot of input from locals. We have had every kind of response you could imagine. [My building] has got to fit. It's not Martian but it's got to be new. It's got to work with the programme, which is very rich and will be an asset to the area.

Blueprint: The LUMA Arles project had to undergo multiple revisions during its five-year gestation. How much of a nightmare is it having to revise and recreate projects due to planning or other objections?

Gehry: It's great because I get to do it like a new project each time.

Blueprint: You said that each time you sat down to discuss the next version, Maja would ask a hundred questions and that would set you off in a whole new direction. Is that a welcome intervention?

Gehry: It's exciting. It's not often your brief accommodates spontaneity and innovations. It doesn't become precious, like a singular programme and a singular vision slowly becomes precious because you are shackled to it. It's open and questioning and vital and changing and has passion and feeling.

Blueprint: You said at the Arles press conference that you read Alice in Wonderland and Don Quixote every day. Is that true?

Gehry: I do read Don Quixote when I get totally frustrated by everyone screwing with everything and nothing seems to make sense. The first chapter with the book burning is particularly lovely. I read it when I need to feel I'm not alone. I think the biggest problem with 'industrial' architecture is that it's lost its sense of humanity. Minimalist stuff drains all the humanity out of it. That idea works great for the money thing, but it doesn't work great for the feeling thing.