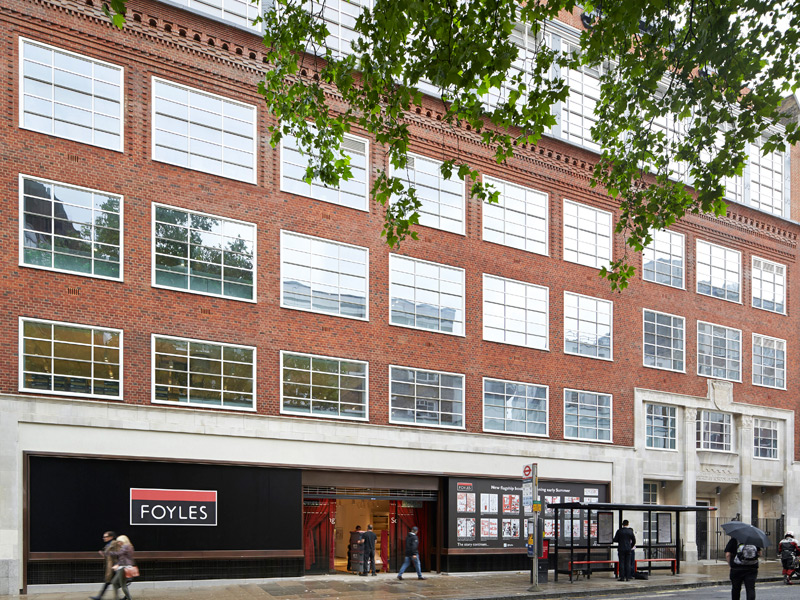 At the beginning of the recession, London landmark bookshop Foyles took the brave step of deciding to moving lock, stock and barrel, into the site of the former Central Saint Martins building next door. As the tills start ringing in the newly opened building we take a wander around the stacks.

Foyles bookshop on London's Charing Cross Road was once a Mecca for book lovers. Opened in 1929 by brothers William and Gilbert Foyle it was at one time listed in the Guinness Book of Records as the world's largest bookshop, with one of the longest lines of shelving (48km). Its rabbit warren of small, eccentric and sometimes infuriating spaces turned it into a tourist destination, while its double payment system was incomprehensible to anyone who walked through the door. But in the past 10 years, as high-street bookshops have been forced to close and e-book sales have risen, Foyles has had to reevaluate its famous store. Now a new flagship shop designed by architect Lifschutz Davidson Sandilands hopes to take the historic bookshop into the 21st century. Foyles has been a fixture of London's West End for more than a century, as shown from this photo of the shop dating back in 1906. Photo Credit: Foyles Archive

It was important for the brand to stay on the same street. The building at 107 Charing Cross Road, just two doors down from the old shop, was the former home of Central Saint Martins art school, before it moved to its new purpose-built complex in King's Cross. It too was a hodge-podge of ad hoc accretions built up over the past century, with grimy windows, paint splattered studios and drafty corridors. Built in 1939 and designed by EP Wheeler and HFT Cooper, of the London County Council Architects' Department, it became the place where Britain's creative bright young things came to hone their talents, from Terence Conran to Gilbert & George and Alexander McQueen, among others. It was also where in 1975 the Sex Pistols played its first ever show, and where Jarvis Cocker came up with the lyrics for Pulp's Common People. Lifschutz Davidson Sandilands, which has been working on the project some six years, has stripped back the art school's labyrinthine partitions to reveal a structure of open floors separated by a central atrium. A series of stairs was added between the front and rear blocks of the existing building to create a clearly legible and easily navigable floor plan. 'It's a very flexible building. If there is any art in the project, it is in taking away in the ad-hoc additions,' says director Alex Lifschutz. 'The front floors are half a level above the back floors and we've taken advantage of that to create what I think is a very human-scale building. As you cross from side to side you are hardly aware that you are also moving up or down the building -- it's a magic formula which takes people around and up to the main attraction on the upper floor -- the cafe and events space.'

It is telling to see how much more space Foyles has gained each time it has moved, with the latest store the biggest yet. Photo Credit: Simon Heafield.

The result is around 3710 sq m of flexible retail space spread over eight alternating half levels, with 13 new residential apartments above, housed within a new zinc extension and accessed through a separate entrance to the north of the bookshop. The impressive 16m-tall atrium, just off the entrance on Charing Cross Road, fills the space with natural light -- a far cry from the stuffy and oppressive store next door. It is lit from the top by a skylight, while the balustrades are formed of frameless glass to further blur the boundaries between staircase and shop floor. As you move up the shop you encounter slots cut into the atrium walls displaying books as well as lecturns sitting on the landing of each floor, both a clever marketing device to constantly introduce the customer to books they thought they hadn't come across before. Architect Lifschutz Davidson Sandilands has made clever use of the space thanks to a series of staircases. Photo Credit: Hufton + Crow.

With more than 6400m of shelving, the shop has the capacity to hold 200,000 titles, the same amount as the old shop, but tellingly far less than the 16.5 million books for sale on the Foyles website. Some bookshelves have been used as partitions to create more intimate spaces, partly in homage to the old shop, while other spaces have been left open. Low ceiling heights meant that services such as heating, cooling and lighting needed to be tightly packed. Rather than concealing them behind a suspended ceiling, which would have made the space seem even smaller, they are on view in their foil wrappings and industrial brackets. Bookshelves have been used as partitions partly to create intimate spaces as a tribute to the old shop. Photo Credit: Hufton + Crow.

While the top two floors are dedicated to a large cafe, purpose-built gallery and events space, a former assembly hall that used to host meetings, fashion shows and dances has become an informal double-height auditorium at the back of the shop. A glass mezzanine and balconies look on to the space so an audience can gather at various levels and look down on an event or at a speaker. The space still has bookshelves and appears much like any other bookshop, but it is the relaxed and adaptable nature of the space that Lifschutz says makes it different. 'The more ad hoc and the more unexpected the space is the better, and the more spaces for events and happenings to take place the better. It shouldn't feel like it's staged, but a seamless part of the building,' he says. The use of half floors at the new Foyles has given the architect extra space to play with to give the store a more open, contemporary feel. Photo Credit: Hufton + Crow.

One of the main ways Foyles is trying to respond to changing reading patterns is with an ambitious programme of in-store events as well as cult jazz performances. As Lifschutz says, 'Bookshops need to connect with the audience through bookclubs and talks, just like music has countered the internet with performances and gigs.' This is nothing new to Foyles. Christina Foyle, daughter of co-founder William and owner of the bookshop until her death in 1999, initiated monthly luncheons in 1930 so that outsiders could meet the literati such as Evelyn Waugh, Kingsley Amis and DH Lawrence. (There is a letter to Christina in the archive from artist Lucian Freud, which reads: 'While your bookshop remains a temple to panic, ignorance and suspicion, I would prefer to not have lunch with you, please do not ask me again'! 3D cutaway model of the new Foyles building gives you a better sense of how it all fits together.

Foyles has appointed Futurecity, a 'placemaking agency', previously responsible for a number of multidisciplinary art projects, including Mark Wallinger's White Horse and Richard Wilson's Slipstream at Heathrow's new Terminal 2, to curate a series of exhibitions over the next few years. It has been advising Foyles on the strategy for the bookstore's new cultural hub for the past two years. Mark Davy, director of Futurecity, calls it the 'gallery of the word', promising 'exciting conversations and collaborations between artists, writers and other creative disciplines'. The first offering will be from Turner Prize nominee and alumnus of Central Saint Martins, Mark Titchner, whose painting studio once existed on the same floor as the gallery.

To mark the opening of the new store, Foyles launched a three-week festival of workshops, performances, signings and readings in which different writers, from Michael Palin to Grayson Perry, opened different sections of the shop -- the Hay Festival of London if you like. The hope is that it has encouraged people to break their usual book-buying routines and help them use the bookshop in a different way than they're used to. Sam Husain, chief executive of Foyles says: 'It's about discoverability, a chance to interact with authors and artists, to listen to great music in one of our many performance spaces and forge partnerships right across the cultural sector.' For them, a bookshop is no longer a place to merely pop in to and buy books; rather it has taken on the role of a library or cultural centre, to educate people, encourage debate and get people together in one public space. Bookshops now also have the job of editing down the mounds and mounds of material found on the internet into a few essential reads. 'What we're aiming for is that people come here for an experience, rather like dare I say it Harrods, Hamleys or Fortnum's,' said Christopher Foyle at the new store's opening.

Some would say it was an entirely mad decision to up sticks and undertake a major architectural project right on the cusp of the economic downturn in 2008, and just as Foyles was returning to profit. Even more so, considering that Transport for London's development for a new Crossrail station (due to finish in 2018) just 200m to the north was deterring shoppers from entering Charing Cross Road, costing the company an estimated £1.5m loss of sales a year. But inspired by one of the UK's most creative art schools, it saw a window of opportunity to combine books and culture in a new modern space and continue its illustrious history. Essentially, it had to either go big or go home. Now it's hoping to pave the way for other bookshops: whether mad, brave or genius foresight, only time will tell. The Saint Martins Lofts
High above the bookworms nosing their way through the new Foyles bookshop, there are 13 new apartments, housed within the existing fabric of the building and two new zinc 'pavilions' on the roof. The Saint Martins Lofts, named after the Central St Martins art school and designed by interior architecture practice Darling Associates, feature penthouses, two and three-bedroom properties with views over London's West End, duplexes with double-height spaces and original-style Crittall windows, and some with large terraces. It is a joint venture between Aquila Housing Holdings and Noved Property Group, the property arm of the Foyle family. Director of Soho-based design hub 19 Greek Street and alumnus of Central Saint Martins, Marc Péridis has styled the interior of one of the apartments. Much of the studio's philosophy is based on injecting new life in design products and promoting sustainability, social design and up-cycling. With this in mind, Péridis has selected pieces with an emphasis on resourcefulness, including those by Nina Tolstrup of Studio Mama, Beirut-based Karen Chekerdjan, 3D pioneer Dirk Vander Kooij and Australian outfit Super-cyclers. There is also work by young and up-and-coming designers, including Chilean studio gt2P and London-based Israeli Yoav Reches.

Says Péridis: 'I remember with such intensity the time spent at Central Saint Martins as a design student. We want to bring that energy and emotion in the apartment at The Saint Martins Lofts, celebrating not only the heritage of this very special building but also London's ability to continuously reinvent itself, breathing new life into objects, buildings and entire urban areas.'