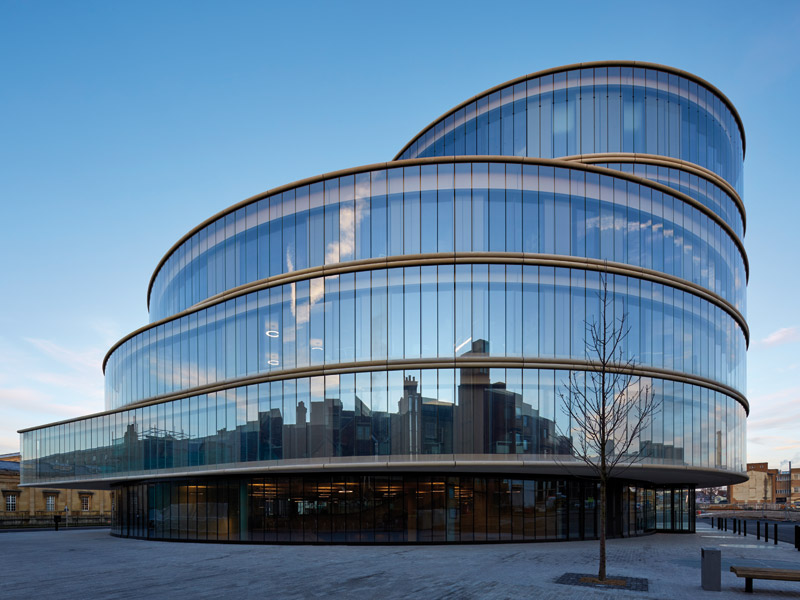 Passersby of the new Blavatnik School of Government in Oxford, with a quick glance, may only see its imposing stack of modern glass volumes - a strange UFO landed among the picturesque, honey-hued, neoclassical buildings surrounding it - ignorant to the monumental space concealed inside that bores through its seven storeys. Here sinuous balconies twist their way up the cylindrical void, connecting one slightly offset floor to another, as if a sculptor had chiselled away and carved out a beehive. Looking up, smaller light wells cut through the thick bands of concrete, while additional, tightly coiled, spiral staircases break up the rhythm and ringed light fittings repeat the circular motif. The £30m School of Government has the feel of a grand civic building, perhaps a huge library or even a concert hall, not quite a university building and unlike anything else in the sedate stone surroundings of Oxford. Circles are broken up with a rectangular form on the first floor, positioning the building towards the street side of the campus

For its architect, Basel-based practice Herzog & de Meuron, the circular shape references government and parliamentary buildings across the world and ideas of exchange, congregation and communication. They are also values central to the young school's mission of improving public policy. Founded in 2010, with a £75m donation from the Ukrainian-born Leonard Blavatnik, Britain's richest man, it teaches the practice of government and leadership through degree programmes and short courses as well as carrying out research into issues facing policymakers across the world. The double-skinned facade, comprising an internal glazed wall and an external frameless screen, was inspired by Bodleian Library's Divinity School

Its new purpose-built home, the latest department in the University of Oxford, started on site in September 2013, with the first students joining in December last year. With 9,800 sq m of floor space, it has the capacity to host more than 550 students, faculty and guests. 'This is a very global school,' says dean of the school, Ngaire Woods, of its current cohort of 130 students from 77 countries. 'Of course, government and making government better means working with other people and learning how to get information from other people quickly. What we wanted was a building that brought people together into a heart, in which people can see each other and call on each other.' Designed from the inside out to foster collaboration and interaction among students and staff, the central space, or Forum as Herzog & de Meuron prefers to call it, links teaching spaces, research areas, meeting rooms and break-out spaces. People can capture glimpses of one another working across levels, while natural light floods in from above and the sides. The central atrium space, or Forum, features balconies to provide views across floors and to help connect people

'Togetherness is so inherent in the design,' says Ascan Mergenthaler, Herzog & de Meuron partner in charge of the project. 'Very often in a school you go up some stairs, down a corridor and there's your office third door on the right, and you hide in it. That's not possible here, you cannot avoid bumping into people, and even if you have your own office you still have this exposure to the central space.' The starting point for the design was even closer to home - the manicured quads that are a feature of every Oxford University college. 'The instinct was a courtyard building with a natural park-like spot in the centre. But the programme was so big and the site relatively small that we couldn't leave that kind of space open. The courtyard became an internalised space,' says Jacques Herzog. 'There are very few cities where you have such a strong topological given, which is of course very impressive as a historic site. But as an architect in such a place, it's something you have to look at very carefully; it's dangerous to stick to it too much and be tempted to copy things.' Initially, the Forum's open, hollow shape was 'even more of a tribute to parliament,' notes Herzog. 'We had many designs where this central space was really made to be an auditorium. But we preferred to play that down so it's more of an informal space. That's certainly where the client had an important part in the discussion: How do you really use it? How do you programme it? To which degree does architecture preconceive that and freeze that as a form, or let it open for change and transformation? Between a Miesian box and a totally organic form there is a big gap and many possibilities, and I think this building is somewhere in the middle.' At its lowest level, the building houses two lecture theatres (seating 160 and 80 people) and flexible seminar rooms that can be joined together for teaching. A sweeping staircase down to this Forum space fans out to form deep wooden steps for informal gatherings and events. A cafe for students is located on the ground floor, along with the reception, above which are group working rooms and spaces for research programmes. The first floor features a 'window to the world', the largest double-glazed single pane of glass in Europe

Looking out on to the street from the first floor is a 'window to the world' - the largest, double-glazed, single pane of glass in Europe - that frames the stone portico of the Oxford University Press building opposite. It is clad in dark-stained oak, with in-built benches to provide a cosy nook for chance meetings. The third-floor level is glazed, mimicking the form of the exterior facade and reflecting the ringed light fittings

Further up the building, the second level is occupied by quieter areas and meeting rooms, topped with a third, glass-clad level for offices and reading rooms. Individual, private offices are divided by glass walls, with linear corridors providing circulation around the ring-shaped floor. Small internal courtyards cut through to the outdoor terrace on the fourth level, while two floors of student and faculty common rooms, with views across Oxford, crown the building. Says Mergenthaler: 'We tried to create a universe of super diverse spaces, from acoustically sealed teaching rooms to very informal possibilities, yet they all share a very strong connection to the central Forum. Teaching is not just one to one anymore, it's about exchange, talking with each other, and I think this building allows for that.' Rich, tactile materials also play an important part in creating a warm and inviting interior, where it's clear no expense has been spared. Floors are made of multilayered, engineered European oak, while sections of the Forum are wrapped in a mid-century-style, dark-stained oak panelling, an echo of the genteel, wood-panelled common rooms frequented by Oxford dons elsewhere in the university. In the interior details, there's also an element of Alvar Aalto's mastery of wood, in the way he clad walls and ceilings with thin batons and screens, to soften sounds and invite you to touch the material. The Forum opens up at the lower levels, with a spiral staircase and deep steps for informal gatherings

The spacing of the panelling that wraps around the lecture theatres, for example, opens up in sections to provide a visual connection with the Forum. 'We've introduced subtle changes in terms of profiling the wood, staining it and so on, which has to do with what the space is about. It creates a sense of cohesiveness; it's not a collage of many different things - there's an underlying common sense to it,' says Mergenthaler.

Additional aggregates have also been added to the exposed concrete, cast in-situ, to make it warmer and more akin to the blonde limestone of Oxford. Says Herzog: 'The concrete is more like sculpted stone, the surfaces are very smooth - it never looks aggressive in this building. I think it's important that you have the impression of the materials speaking to you and making you feel comfortable.' Externally, the school is presented as a series of shifted, glass-clad discs. Pure geometric circles are broken up by a jaunty rectangular form on the first level that positions and engages the building towards the main thoroughfare of Walton Street to the west and away from the 4ha campus of Radcliffe Observatory Quarter behind. Sold to the university in 2003, the former site of Oxford's first hospital, the Radcliffe Infirmary, bordered by the residential Jericho area, is being transformed into a new academic quarter with a planned humanities faculty, the new Mathematical Institute, library and local health centre. Originally masterplanned by Rafael Viñoly Architects in 2005, the £1.25bn scheme has since been taken over and modified by Niall McLaughlin Architects, which completed student housing for Somerville College on the site in 2011. Herzog & de Meuron's School of Government sits at the south-west corner, with Somerville College to the south and an empty site awaiting development to the east. The circular shape acts as a gateway to the entire campus, says Mergenthaler: 'It's the first building you meet on the campus. It's very important that the building is inviting and you can flow around it instead of it blocking the campus.' The shifting floors create overhangs and terraces, which step down from the back of the building, protecting the surprisingly classical and quaint wooden entrance doors. It's Herzog & de Meuron's take on the ostentatious wooden gates that conceal colleges from the outside street. 'We thought it wasn't adequate to have just a revolving door or something really modern. It's also the moment you first touch the building and we felt it was important to give it a certain significance.'

A double-skinned facade, comprising an internal double-glazed curtain wall and an external frameless glass screen supported by pre-cast concrete bands, creates an opaque, impenetrable exterior that reflects the sky and buildings around it. The slender proportions of the glass panels nod to the panelled frontage of the Old Bodleian Library's Divinity School, with elements of James Gibbs' Radcliffe Camera building and the Sheldonian Theatre. 'This skin-like quality is what we like so much about historic buildings. We could never achieve the same quality; there was certainly an intention to go away from something in order to be perhaps even closer,' explains Herzog. Just like many Oxford colleges, the sacred inner sanctum is protected, a world only for a privileged few. At the Blavatnik School of Government, the sense of transparency and openness inside is not quite making the same signals to the outside. It's inward-looking and impervious, a shiny new beacon for the next generation of political leaders and a statement of the university's pre-eminence. After all, of the 55 Prime Ministers to date, Oxford has spawned 27 of them, and 12 more than Cambridge.