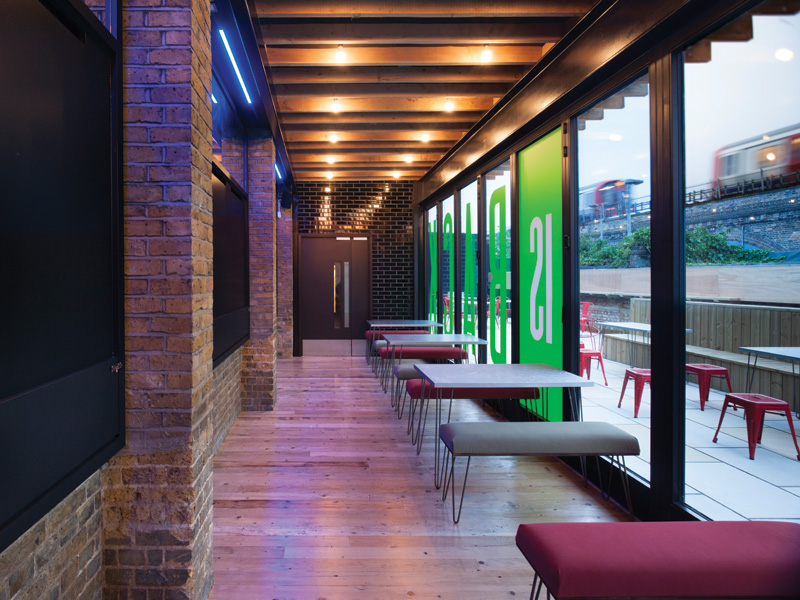 Clare Dowdy takes a look at some of the extras being offered in London at a gallery, theatre, and the British Library

Across the country, the cafes, bars and restaurants of cultural institutions are expected to work harder and harder.

Not only must they service the visitors to their collections, events or performances, but they must act as an inclusive public space and lure in non-culture vultures. The main aim is to encourage everyone in to spend more money on coffee and other sundries, to boost the organisation’s coffers.

In contrast, conventional high-street food and drink offers are likely to have a comparatively narrow target market, making it easier for them to come up with a concept and aesthetic that suit most of those customers.

But what a straight commercial offer generally lacks is a venue with meaning. ‘We are responding to a specific place and use,’ says Angus Morrogh-Ryan of De Matos Ryan, whose cultural work includes for Sadler’s Wells, York Theatre Royal and, most recently, the Members’ Rooms at the British Library. ‘We are typically developing a bespoke proposition that is in support of the unique ambitions of that cultural organisation and its content.’ The Dulwich Village Picture Gallery’s Pavilion, a structure opening this summer to house temporary events at the venue. It is designed by IF_DO

Lucky is the architect or designer who gets their hands on a bit of heritage or a fabulous contemporary space. From the Design Museum to Bristol Old Vic, there may be extra sensitivities to take into account, but at least there’s a lot to work with. These days both new-builds and remodelling inevitably involve devoting more space to lingering over food and drink. John Pawson’s in-your-face bleacher seating in the Design Museum’s foyer epitomises this approach. Morrogh- Ryan describes such spaces as ‘living rooms’ in the city, where ‘members of the public freely inhabit these places as shared communal space’. At York Theatre Royal, by pulling the cafe further forward and making it more visible from the street, the firm has helped increase revenue by 40 per cent. The new Pavilion at the Picture Gallery, Dulwich Village has been made highly flexible by IF_DO, with a timber truss roof suspended over a deck and supported on three mirrored panels. The other panels are moveable

Likewise at the British Library, Matos de Ryan was tasked with coming up with an aesthetic language for the new Members’ Rooms ‘which embraced the ethos, materiality and architectural detailing of this iconic building by Sir Colin St John Wilson,’ says Morrogh-Ryan.

At Haworth Tompkins’ new venue The Bush – a £4.3m reworking of a former public library in west London into a theatre – the aim was to make the building more porous and to entice in people without a theatre ticket in their pocket. So ‘the front-of-house spaces need to reflect the venue’s ethos’, says Steve Tompkins. He set out to ‘keep the informal, almost domestic qualities [of the building], and the sense of being invited into a lovely house’. Now the old reading room – which was remodelled with designer Chiara Stephenson – is a lounge area, with a brightly coloured ceiling and zinc table tops. Meanwhile, by adding a 95 sq m terrace, the opportunities for meeting up are even further extended. The Bush Theatre in Shepherd’s Bush is a £4.3m reworking of a former public library by Haworth Tompkins, with the aim of attracting people other than theatre-goers with its informal, almost domestic qualities of the building

Haworth Tompkins has form in this sector, including giving Chichester Festival Theatre a bigger foyer with two new cafe-bar extensions, and transforming the National Theatre’s north-east corner into a new bar, a relocated cafe, and a new external entrance to House, the NT’s refurbished restaurant. Now the practice is remodelling the front-of-house of Bristol Old Vic.

In posh Dulwich Village, it is not unusual for visitors to the eponymous Picture Gallery to be older, well-heeled locals. The hope is that its first pavilion – which is unveiled this summer – will help change perceptions. The 200 sq m temporary events structure by IF_DO is designed to both complement and contrast with John Soane’s main building of 1811 – described as the world’s first purpose-built art gallery – and Rick Mather’s 2000 extension.

‘Designing for a diverse crowd and a range of possible activities called for a flexible approach to design,’ says IF_ DO director Al Scott. The three-year-old Camberwell architecture firm’s solution is a timber-truss roof suspended over a timber deck and supported on three fixed, mirrored panels. The rest of the wall panels are moveable or removable, making the space very flexible. ‘When closed up, it simply appears as the panels do – reflections of the surrounding landscape and adjacent gallery building,’ he adds. The diverse crowd the gallery hopes to attract will be lured courtesy of some unexpected partners to host events: nearby pub the Camberwell Arms and Peckham’s ubertrendy venue on top of a multi-storey car park, Frank’s.

But even at cultural destinations, visitors can overstay their welcome. At the British Library, ‘we were very conscious of the dilemma between creating welcoming spaces…where users might be tempted to settle for the day,’ says de Ryan, ‘while at the same time ensuring that the dwell time per member is subtly rotated to allow greater availability of these spaces for more than the few members arriving first in the morning’.

To this end, it created a series of rooms with different characters, which were more about being sociable than getting down to laptop work. ‘At the most basic level, simple devices such as ensuring that tables are big enough to eat at, but not big enough to also settle down with a laptop, is key,’ he adds. ‘Similarly, providing limited access to power sockets controls the use of laptops.’ So it is not just high-street coffee shops that are at risk of being exploited by the nation’s mobile workforce. Which means that success in all food and drink outlets is not just about the quantity of visitors but also the quality.