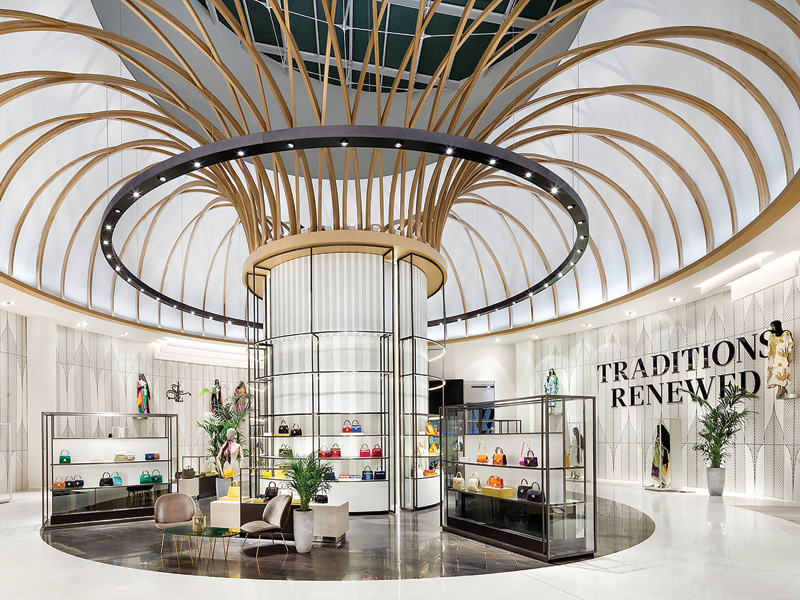 Walk into an old-fashioned department store and it’s easy to see why the concept has suffered. ‘Department stores have tended to stick to a very traditional layout, with sunglasses in the sunglasses section and handbags in the handbag department and a sea of rails in ladies clothing,’ says Gregor Jackson, partner at retail design agency GP Studio, ‘but people don’t really shop like that now.’ Paul Sandilands, principal at architecture practice Lifschutz Davidson Sandilands is even more blunt: ‘Harvey Nichols grew old with its customers and at one point Peter Jones was in danger of dying with its customers.’

Luckily department stores hold a special place in the British psyche. The newly refurbished Harvey Nichols took third place in the Which? Best High Street Shops 2017 report (up from 21st place in 2016 following its complete makeover), while John Lewis was fourth. ‘Department stores got a little bit complacent, but they are still seen as strong brands and a key anchor in any shopping mall development,’ says Jackson. Iseta’ The Japan Store’s latest opening in Kuala Lumpur, designed by Tokyo firm Glamorous, combines elements of traditional Japanese design such as flags and bamboo with a flexible, contemporary design to create a store with the wow factor

‘Most large shopping centres have one or more department store; Westfield even added on extra space to accommodate John Lewis,’ notes Sandilands. The latest major shopping centre to be built in the UK, the Lexicon at Bracknell, included a giant new Fenwick at its heart, while John Lewis has recently opened in Oxford’s new Westgate Centre. The picture elsewhere in the world is even more positive. ‘In the Far East and Middle East, department stores are constantly springing up and they are still very much seen as a destination – a go-to experience with services beyond shopping,’ says Jackson. ‘They become the heart and pulse of the location they are in, similar to the American culture of driving to a destination for a whole day. In the UK and Europe they have been slower to react to changing trends.’ Iseta’ The Japan Store’s latest opening in Kuala Lumpur, designed by Tokyo firm Glamorous, combines elements of traditional Japanese design such as flags and bamboo with a flexible, contemporary design to create a store with wow factor

Part of the resurgence in the popularity of department stores worldwide can be attributed to the simple wow factor of amazing design. For example, HMKM’s new 18,600 sq m Robinsons department store in Dubai’s Festival City Mall has 600 brands in a stunningly light and airy store featuring dramatic rotundas and vertical garden columns in the atrium, while its 47,000 sq m Galeries Lafayette in Beijing is jaw-droppingly spacious and elegant. In Kuala Lumpur, the new Isetan The Japan Store, designed by Tokyo design firm Glamorous, in association with architects at Tange Associates, oozes wow factor in every square metre and should be enough to get even the most committed internet shopper off the sofa. Galeries Lafayette’s latest store in Beijing, designed by HMKM, has six floors of high end goods and has an area dedicated to local, mainly young designers

Retail designers can also be credited with widening the appeal of department stores beyond being the traditional natural home for older, wealthier female shoppers. ‘Department stores had slipped into the dinosaur category for the younger consumer,’ explains Gregor Jackson, ‘but the retailers are now trying to combat that – for example the John Lewis Loved and Found [a stand-alone boutique for new and contemporary brands]. Stores are beginning to be more innovative in the brands they are bringing in – to create more of a temple of retail in the high street, experimenting with new and smaller brands, incubating them and allowing them to grow.’

To help these new customers feel at home, retail designers are creating environments that have a younger and less feminine vibe. For example, Dalziel & Pow worked with 180-year-old Australian department store David Jones to create a new look for its Melbourne flagship; a monochrome palette with splashes of vibrant orange combined with bespoke digital installations designed to create ‘a more aspirational, fashion-led, premium attitude, differentiating David Jones from its competitors and appealing to a younger, more fashion-forward audience. Lifschutz Davison Sandilands was inspired by honeycombs to create the stunning three-dimensional, backlit ceiling in the food hall of La Rinascente in Milan The stunning suspended steel ceiling at Tsvetnoy Central Market in Moscow was created by Lifschutz Davison Sandilands, and gives a gritty, industrial look to the store

The best of the new and refurbished department stores are also designed with flexibility in mind, as stores increasingly use their space to entertain and inform their customers as well as just sell to them [see our feature on experiential retailing on page 98], so the area has to be able to adjust accordingly. In addition, there is an increasing trend towards regularly refreshing the brands that find a home in department stores, which also requires a level of flexibility in design. ‘The design opportunities in department stores are really exciting; you can create great spaces to insert the concessions into. Selfridges, for example, changes brands and refreshes the offer all the time,’ says Sandilands. ‘Brands have to compete with each other, and people who run the department stores are becoming more like curators – and the environment has to be flexible so that their collections can be constantly changing, encouraging people to stay longer in the store.’

There’s also the challenge that younger people in particular tend to shop in a more lifestyle way – seeking out a brand or style and browsing rather than just venturing out to buy a particular article. ‘Stores need to be showing a group of products together in a more exciting manner,’ explains Jackson, ‘and department stores have the space and footprint to actually do that. Simply putting things on a rail isn’t enough anymore; clothing needs a lifestyle and a story built around it, and designers need to provide space for launch-pad areas and seasonal changes so the customer’s eye is always caught by something new.’

Irene Maguire, director at design consultancy Caulder Moore, notes that this way of shopping is similar to the way that younger people shop online: ‘There has also been an important shift away from categorising by price level into one that focuses on a specific style statement; here products of a stylistic similarity are grouped together.’ Gensler’s design for El Palacio de Hierro in Querétaro, Mexico, is fun and youthful, and has the versatility to display products in a more lifestyle-oriented way

The final secret of success in the new department store revival, says Paul Digby, creative director at HMKM, is making it personal. HMKM has just finished a £35m refurbishment transforming an old-fashioned but much loved Williams & Griffin store in Colchester into a 21st-century Fenwick, as well as creating a new Fenwick at Bracknell. ‘Department stores have a lot of competition out there and online, so we were trying to bring a new energy to the design for a different era of department store,’ he explains. ‘With a store that’s outside London in particular, having a local approach is very important; a store needs to identify with its local customers.’

In Colchester that has included creating a new jewellery line based on a Roman piece dug up during the renovations (and donating the original to the town’s museum), and even basing the design of the handbag department around the proportions and designs of the Crittall metal windows once manufactured in the locality. “We wanted to tap into that level of storytelling to create a richness to the design; it’s very important to localise and to personalise,’ he says.

What lies ahead for the department store? Linking online and store retailing together in a more coherent way will help ensure a healthy future. Recent figures from the Office of National Statistics show that while overall online sales lifted by 15.6 per cent, online sales from department stores stormed ahead with 24.5 per cent growth. David Jinks, head of consumer research at delivery company ParcelHero explains: ‘Britain’s consumers have always valued department stores for their expertise and after-sales service. These figures show that they are finally beginning to bring together their expertise with a more competitive approach to pricing online.’

Gregor Jackson sees this as a real opportunity: ‘Stores need to take care of these new customers and see their journey to collect something they have ordered online as an opportunity – perhaps for them to try the product on or see associated products that might be of interest to them, or view something else from the same brand. Stores not only need to work on the logistics around holding click and collect items safely in store, they need to think how they can make that collection an enjoyable experience and upsell at that point of them coming into the store, rather than it just be a mechanical and not very emotive process.’

Creative director of Dalziel & Pow, David Dalziel, is definitely upbeat about the future of department stores. ‘The large-format multibrand retailer could and should be the most vibrant and relevant trader in the city,’ he says in a new report. ‘It should be a leader in the market with its strength and authority, its broad appeal and targeted events – it can entertain, feed, replenish and revive a customer in a way that no other single entity can. There is no such thing as “future proof”, but with an open mind and a strong sense of self, a department store can be the most potent in the market. All the building blocks are there.’