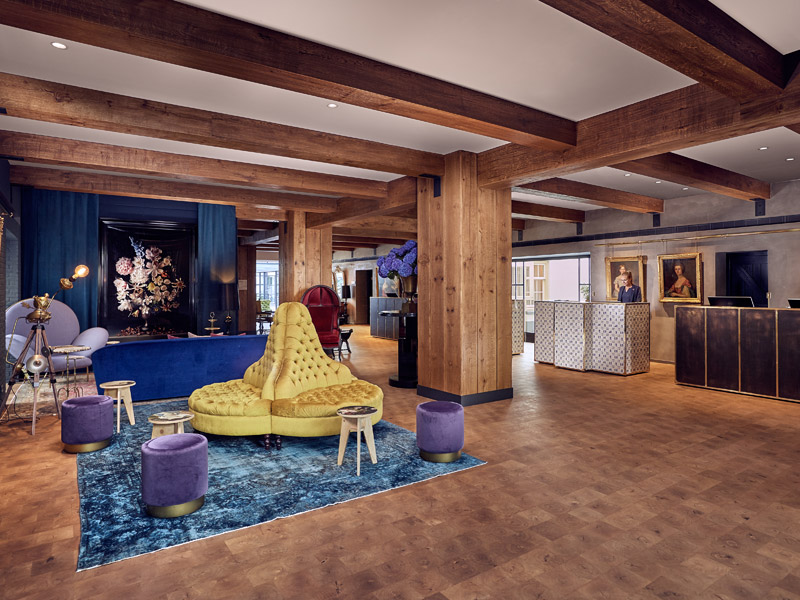 It’s impossible to avoid history when you step into the luxurious, refurbished Pulitzer hotel located in Amsterdam

It’s impossible to avoid history when you step into the luxurious Pulitzer hotel in Amsterdam. Originally 25 canal houses that were built in the Golden Age of the 1600s, they were merged into one building that originally opened as a hotel in the 1970s. Later renamed the Pulitzer after its owner Herbert Pulitzer, grandson of Joseph Pulitzer who is famous for the eponymous journalism prize, the hotel boasts quintessential Dutch elegance.

Its recent refurbishment means the Pulitzer now has 225 guest rooms and suites (all of which are different), tranquil inner gardens, meeting and event spaces, a garden cafe, a hotel bar and a restaurant. The combination of buildings makes the Pulitzer a joy to explore – each is on a slightly different level and connected by a maze of passageways, small flights of stairs and oddly shaped halls.

The flooring – which is different in almost every space – was chosen to match the history of each area. The building that houses the lobby was once a warehouse. The designer chose Havwoods’ End Grain flooring because end grain was traditionally used wherever there were steel carts because of its durability and longevity – which naturally also makes it perfect for a high-traffic lobby and the bar and restaurant areas. Havwoods timber can be found throughout the hotel: both smooth and textured planks from the Venture Plank, Henley and Trapa ranges as well as a couple of different herringbones. No two rooms or suites are the same – each balances Amsterdam’s rich past and contemporary present in an eclectic mix of finishes, designs and elements that complement each room’s individual charm. The palette at the Pulitzer is that of the Old Masters: deep blues, rich greens and pinky-plums. Original stucco ceilings, antique Delft tiles and magnificent fireplaces are offset by an eclectic mix of oil paintings, original mirrors and vintage prints, and thrown into contemporary relief by custom-made furniture and patchwork Persian rugs.

Among all the elegance is plenty of humour, too: the archway of books with a bicycle on top, a wall of 17 brass trumpets with a solitary purple one, and a bright yellow bulldog perched on a drinks trolley all show a quirkiness that is very Amsterdam. The Pulitzer gardens occupy a surprising green oasis nestled at the centre of the hotel. Away from the hustle and bustle of the city, it is a tranquil hideaway to relax, work or socialise among seasonal plants and playful sculptures.

See the city by pounding the pavement or put your feet up and discover Amsterdam in style as you cruise the iconic canals in Pulitzer’s classic hotel boat from 1909.

Overall, the Pulitzer is a unique blend of upmarket, traditional and modern Dutch craftsmanship hidden among the city’s iconic canals.