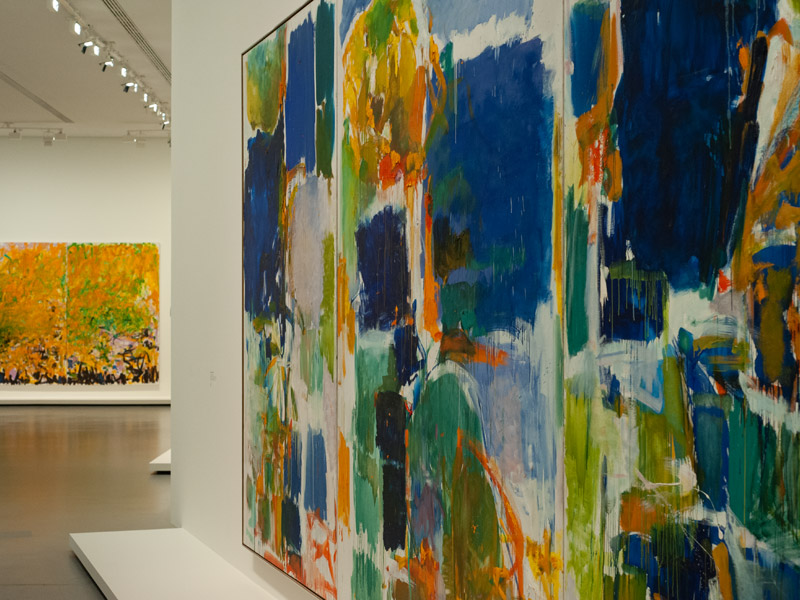 Giverny and Vétheuil are not so far apart. Around a big bend in the Seine, less than 20 kilometres, it takes about 20 minutes by car to get from one to the other. Not so far apart either are their most famous artists: Claude Monet and Joan Mitchell. In terms of colour, light, technique and nature there is a convergence that signals a rapprochement between the two of them from a pictorial, historical and philosophical perspective. Half a century apart and world’s apart, there is nevertheless a dialogue between their work. From October to February next year their work has been brought together at the Fondation Louis Vuitton in Paris, demonstrating just how close a precursor of abstraction was to a master of abstract expressionism.

Long overlooked yet now internationally recognized Mitchell was a woman in a man’s world, too American for the French and too French for the Americans, a fish out of water, she swam towards a new shore. Culturally uprooted, she produced some of the freshest most exuberant adventures in colour of any of the great expressionists. ‘My painting is abstract, but it is also landscape’ was how she described her work. It has come to be seen as the quintessence of abstraction.

History is full of women: overlooked women, difficult women, unloved women, forgotten women, unrealised women, overshadowed women. She was all of them. But foremost and without qualification she was a great artist. Her pictures appear to express happiness, yet she was not a happy person. “…There is sadness in full sunlight just as there is joy in the rain; yellow, to me, is not necessarily happy” she once said. 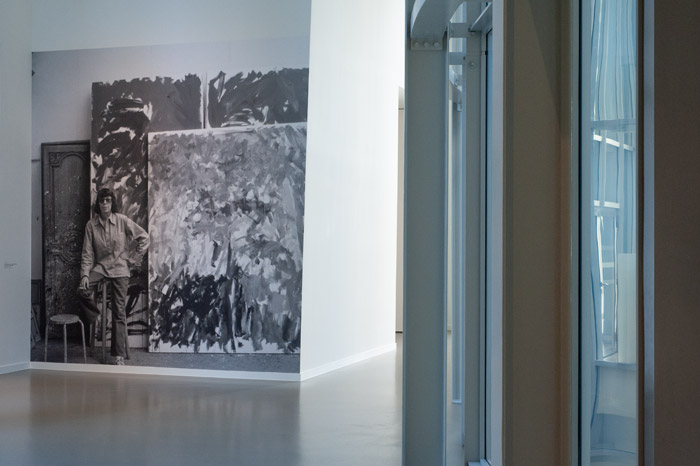 Coming from a wealthy and intellectual Chicago family, she was nevertheless like so many women artists who gathered at the Cedar Tavern off Eighth Street in New York, forced to exist in the grim shadows cast by Pollock, de Kooning and Kline.

That she became tough, arrogant, and sarcastic as a result is no surprise. How she came to be such a beautiful shadow as a result of connection with Monet is the story behind this exhibition. So full of vibrant, dynamic, panoramic landscapes, dazzling diptychs and polyptychs, even quadriptychs, full of electric fiery shades to arrest the viewer, these paintings are as fresh as when they were first produced over 50 years ago. Mitchell wrestled with the difficulties facing a woman artist at the same time as Simon de Beauvoir was writing: ‘As long as she still has to struggle to become a human being, she cannot become a creator’. If women’s art lacked sweeping social relevance or ‘metaphysical resonances’, it was because women themselves lacked the defining human quality: freedom. Fortified by family money she traded the Cedar Tavern for the Café du Dôme in Paris and cast off social conformity for a life of alcohol-fueled destructive behaviour. She became an outsider who always kept her blue suitcase packed, which suggests she never felt completely at home.

Monet and Mitchell both spent time living in melancholic solitude, in similar states of suffering, sadness, and mourning. That the triumph of true joy in their paintings as they overcame their despair and depression is one of dizzying, dazzling emotion is more than just miraculous.

Monet was rediscovered and hailed as a pioneer of American modernity in the 1950s. It was André Masson, following a stay in New York in the 1940s, who, in a 1952 issue of Verve magazine, crowned ‘Monet the Founder’ as a pioneer of modernity and of abstract expressionism. Later, celebrated critic Clement Greenberg would expand on and clarify that judgment in 1955, while the director of MoMA, Alfred Barr, decided to acquire the Water Lilies, a landmark painting for New York artists. Thus, Monet rose from the critical oblivion into which he had plunged, following installation of his panoramas at the Orangerie in 1927, to reappear as a revolutionary. It was the beginning of the Monet revival. Modern, gestural, energetic, abandoning perspective, large scale; you name it, Monet did it first. And during the 1950s artists in the New York School made pilgrimages to the Orangerie in Paris to make the connection. (Witness the recent Monet-Rothko exhibition held in the village of Giverny.)

Mitchell could stand on the terrace of her home in Vétheuil and look across to Monet’s home where he lived for three years before finally moving to Giverny. They shared the landscape that was the catalyst for both their talents. They both took refuge in the countryside where perception, sensation, feeling, and memories intersected. She would always vehemently deny any influence but if you look at the pictures it is certainly there. And she did have a set of postcards of Monet’s work propped up in her studio. Start with the purple mornings. Look at the surface and reflections on water, the relationships between colours, the conjunction of light and space. They are neither of them just imitating nature. They blend emotion and feelings with reminiscence. He ‘sought impressions’ – “I do what I can to render what I experience before nature”, whilst she transposed ‘feelings’ – “If I don’t feel it, I don’t paint”. 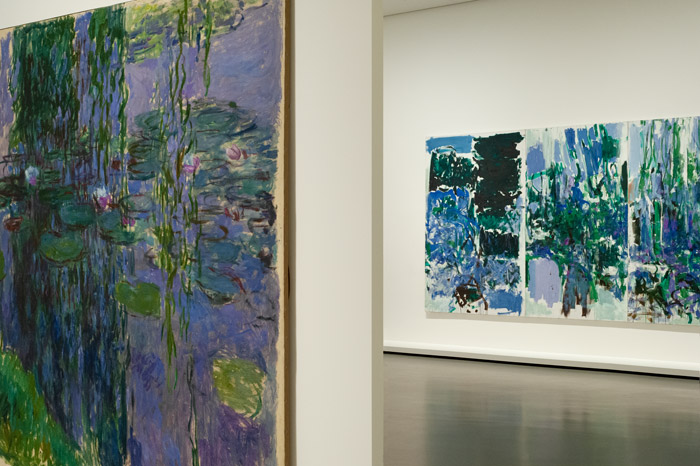 Frank Gehry’s exceptional spaces at the Fondation Louis Vuitton have seldom displayed anything so wonderful. When its glass curves went up like sails floating across the Jardin d’Acclimatisation in 2014, Bernard Arnault’s Fondation appeared a thrilling interloper on the city’s cultural scene: a private museum showcasing a billionaire’s individual taste in a city whose public galleries had honed stellar collections over the centuries; a building of riotous whimsy in the capital of rationalism. Eight years on and a succession of spectacular yet scholarly surveys have proved Arnault’s gravitas, while the disruptive pleasures of the architect’s design have turned out to be a fantastically energising place to show contemporary work. Gehry’s panoramic terrace at tree canopy height feels like walking through the sky. It is hard for older, weighty, bigger public museums to match such experiences of lightness and airiness. Many collectors assemble impressive contemporary paintings; few Europeans exhibit them to the scintillating effect seen here. That is a new game. Painting since 1960 has tended towards the immersive, sculptural and architectural, and that demands new forms of display. But here this winter, once again, the building serves the art, and the art matches the building: a vision for paintings that encompass ambition, discipline, freedom, experience, masterful technique and heedless experiment. Catch them if you possibly can. You will be taking an enchanting and immersive journey.

Bus 244, stops in front of the Fondation on weekends.

Fondation shuttle: leaves every 20 minutes from place Charles-de-Gaulle - Etoile, at the top of avenue de Friedland.