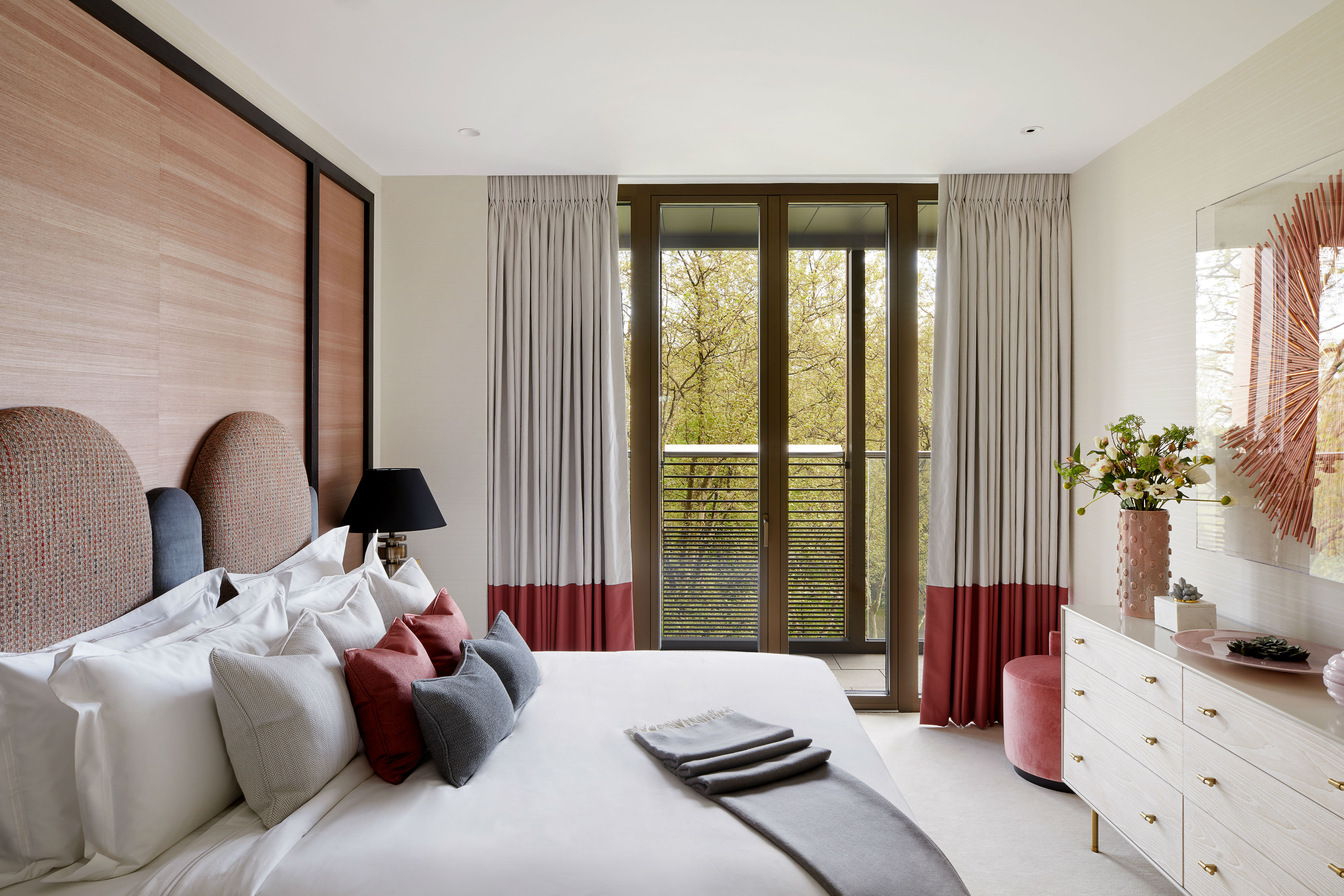 Set in the heart of the historic Marylebone Village, Chiltern Place is an elegant new collection of luxury apartments developed by Ronson Capital Partners LLP and designed by PLP Architecture. Recently, Chiltern Place has also been graced by another distinguished studio: luxury interior design practice, Elicyon.

Commissioned by Ronson Capital Partners, Elicyon were charged with creating a bold, unique show apartment for Chiltern Place – and their result worked almost too well, with the apartment being sold only days after its interiors were completed. To find out more about this exclusive apartment – and why it was snapped up so quickly - we visited the new luxury development and spoke to Elicyon’s founder, Charu Gandhi.

One of the first things that Gandhi mentions as we step through the doors to the apartment is the base build that the property came with, which became Elicyon’s canvas to work from. “Inherently the base build is really nice,” she says. “The unit was effectively ready to move in but had no wall finishes, had no furniture or decorative objects, it was a white box”. However, Gandhi continues to explain that, even though the build had been mostly completed, the developers – particularly Lisa Ronson – remained very involved in the development.

“Lisa Ronson has quite a strong creative flair,” Gandhi says with a smile. “I would say she’s like a designer’s developer; the first presentation we did to her, she actually looked at it and said ‘it’s a bit safe’, and we thought we’d gone quite playful. She’s quite adventurous, she’s confident”. For quite a small floor plan, the apartment has been cleverly configured to include three generously sized bedrooms, a powder room, a kitchen and a large living / dining room, complete with both an indoor and outdoor balcony. Ronson Capital Partners have also gone the extra mile with the development’s finishing touches. “We really took note of this chevron floor that the developer invested in and decided not to do a rug,” says Gandhi, gesturing to the corridor in front of us. “In the bathrooms the marbles are really quite interesting for a developer - Lisa has gone for a different marble in every [bathroom], even on the floor. [She] hand selects them herself. It’s quite a lot of effort for a developer, to have three different marbles in every bathroom; [but Lisa] is very passionate about the finishes and it really shows.”

Looking around the apartment, it’s noticeable how bright and airy the space is – and also, how pink. “Lisa had a very strong brief of it being bright, light and fresh, those were her three key words,” Gandhi explains. It seems Elicyon took the brief to heart. In the living room, blush-pink round armchairs are reminiscent of the restaurant Sketch; curtains have been discarded in place of delicate sheers. One wall is covered in a jigsaw puzzle of artwork – a theme which is prominent throughout the rest of the property. “The art wall was a big starting point,” Gandhi affirms. “Projects On Walls sourced all of the artwork for the art wall; they gave us a few options and we selected a compilation that worked best”. Pointing out various pieces of artwork around the living and dining room, I notice that each piece works remarkably well with the colours and textures that decorate each space.

Gandhi explains that the colour scheme was chosen first, and afterwards, Elicyon found art to suit their ideas. “It’s not unusual for a gallery to come into the studio, open up a few [paintings so we can] look at them and choose. We then drove the art in the direction of the colour tones – but the art being fundamental, and having a few walls where there were multiple pieces, was an early thought”. With tactile, velvet seating, copper and gold elements and a large terrarium sat on the living room coffee table, the Chiltern Place show apartment is remarkably on trend. In the bedrooms, everything from the headboards to the small, decorative boxes on the side tables seem to match; this is purely incidental, as they were chosen at separate points in the design process. “If we’re being on trend, it happens quite a lot”, Gandhi says. “Each room kind of has its own colour scheme, but also all kind of have this orange-pink running through.”

In the master bedroom, black and mustard tones act as a counterpoint to the pink. Meanwhile, the second bedroom is full of purple and navy accents, and the smaller third bedroom is touched with hints of blue and grey. But, above all, “It’s a pink apartment,” Elicyon’s founder maintains. “In the base work we inherited, there’s a pink/coral undertone. Even the walls have a hint of blush, brought out by the pink.” So why was it so important for Elicyon to add to the coral hints that can be found in the apartment’s base work? “When we work with developers, we try to really pay homage to the base build,” Gandhi continues. “What the developer wants is two things. [They] want someone to come in and buy this unit, but what would be more effective for the developer is for someone to come here and say ‘this unit shows me exactly how I can occupy another unit’. I think it’s important that we showcase what the building can do for people.”

Not only did the team have to think about what the developers needed from their show apartment, but, by its very nature, the project had to be finished quickly. It took Elicyon a mere 10 weeks to complete the Chiltern Place show apartment, which Gandhi says comes with both positives and negatives. On a positive note: “I’m very proud of our sourcing items at that pace, because we bought a lot of unusual, off-the-shelf pieces”. However, this also meant that there were less bespoke pieces made for the property. “Probably I would say only about 10-15% of stuff was bespoke,” Gandhi mentions. “When you do things bespoke, you want to give yourself time to test them, for them to make a prototype and so on – that time you don’t really have [with such a tight schedule]”.

Though there are other, smaller bespoke touches, there are only three main pieces that Gandhi points out as being specially made for the apartment.The first is the plush rug in the living room, made up of shades of blue and pink in a magnified, abstract version of a terrazzo pattern. The other two are pieces that Elicyon’s suppliers already create which were altered for the project; an ombré sideboard in shades of aqua is settled into the living room, while a semi-bespoke bench rests at the end of the bed in the master bedroom. As we make our way through each room in the apartment, Gandhi points out elements of interest and things she loves; it’s clear that she’s passionate about the space she created. Sculptures from Alfie’s antique market adorn the corridor and dining area; a large antiquated fish-eye mirror sits on the wall by the dining table, both a statement piece and a look-back into the main living space. “We added [a] plaster finish [to the walls],” Gandhi points out, putting a hand on the tactile surface. “If you look around the room, it adds a bit of movement.” In the second bedroom, fashion references have been made with a Chanel boucle style fabric headboard; the artwork in this room is another bold, pink statement, with a charming surprise – it’s made of pencils.

However, there are a few choices that Gandhi and her team have made that are a little bit different. The first thing is the absence of chandeliers. “There are chandelier points, but we made the decision to take away the focus from the ceiling, [to instead] focus on the lateral nature of the apartment,” Gandhi says. It’s a move away from the norm, as she even admits that Elicyon “very rarely do projects without chandeliers”. Intentionally, the team have also added very little joinery to their interiors. “If someone moves in and wants to create their own storage, they have the opportunity,” Gandhi explains. In comparison, all the artwork has been fixed to the walls. “We find with some of these high-value show apartments, it is actually nicer to walk in and tell a purchaser ‘it’s all yours’ – [they can buy it] and nothing in here goes away. Everything was included. [The art] is part of the apartment now, and that actually lent it a certain focus and clarity.”

With so many similar colours throughout the apartment – from the artwork to the decorative pillows on the beds – it’s curious how Elicyon have managed to prevent the space from looking washed out. Gandhi discloses her secret: textures. “Even if you look at [one of the chairs] against a wall, if they didn’t have texture, the colour is so similar they could blend into one”. But, wouldn’t it also be as easy to over-texturise? Gandhi concedes it can be; “Which is why some of our most playful textures are in our cushions – there, you can get wrong and it’s okay.” “I think as a studio – and that’s actually where working on [show apartments] is fun – if you don’t let yourself dip your toes near making a mistake, you’ll never know. It’s not unusual for us to set it up, go home, and in the morning [change things around],” Gandhi remarks. She smiles, shrugging lightly. “As long as you create a scenario where you can fix [a mistake], is it so bad to have a little bit of fun?” Looking around at the brightly coloured furnishings, mid-century accents and the stunning, playful art works, it’s difficult not to agree. Elicyon’s Chiltern Place show apartment is fun.

So what’s next for the luxury interior design studio, now that their apartment is no longer on show? At least where Chiltern Place is concerned, they’re sticking around. “We’re doing a penthouse for a private client”, Gandhi divulges, “[and] we’re hoping to do another [show apartment]. It’s sold so quickly, [Lisa] needs another one!” Surely, for an interior designer, there is no higher praise. There’s no doubt Elicyon’s next venture at Chiltern Place will be as exciting as the last – here’s hoping potential buyers will get the chance to see it.