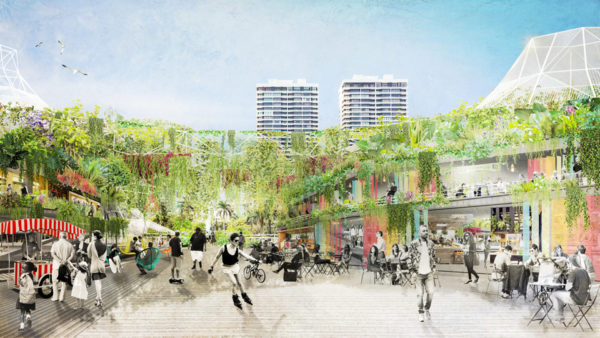 After going up against over 40 international applicants in the Shore to Core waterfront design competition organised by New York’s Van Alen Institute and the West Palm Beach Community Redevelopment Agency, it has been announced that Ecosistema Urbano is taking home the prize for their Open Shore proposal. The entries were asked to envision West Palm Beach in the future considering all aspects of a changing city including the population, economy and the environment. The Open Shore project promised to be the ‘first bioclimatic domes in the US with hanging gardens’. The impressive domes will be responsive to climate supporting the need for a more socially cohesive city. The team explain to Dezeen: ‘This new urban environment blurs the line between the city and the water, bringing the nature of the Lagoon back to the city centre while adapting to rise of the sea level’. Further proposals will be presented in May to begin the contracting process and to keep the momentum going.

Runners up for design include Perkins + Will and research winner by Happy City, University of Virginia, StreetPlans, and SpaceSyntax.

What do you think WPB’s future transformation? Tweet us @DesignCurial