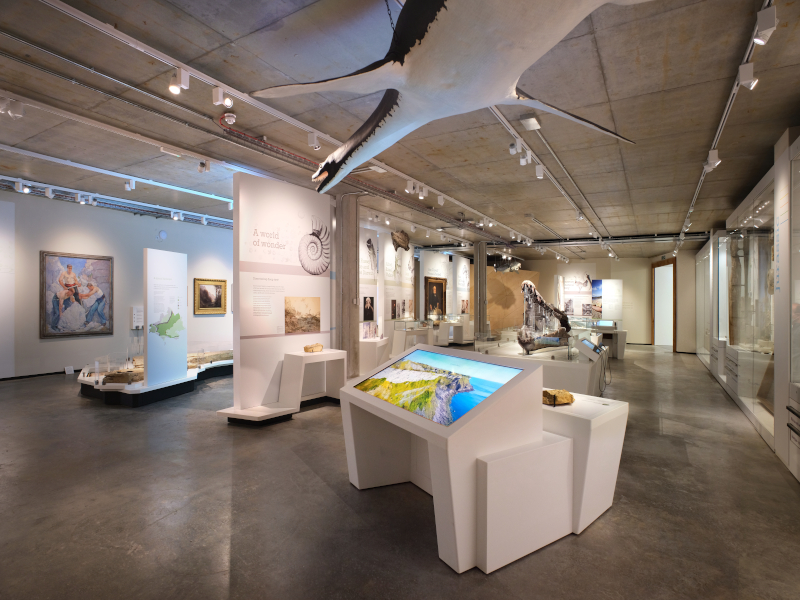 The Dorset Museum in Dorchester presents a fine showcase for the region, as well as its outstanding collections

WHEN SIFTING through Dorset Museum’s collection to find the main themes and stories for its new exhibition spaces, it helped that Real Studios director Yvonne Golds has intimate knowledge of this picturesque region, its history and landscapes – after all, she grew up here.

Says Golds: ‘From my point of view it was one of those projects that was really important for us to win. It’s my home county and very much part of who I am.’ However, looking back on the five year undertaking – as well as exhibition design and interpretation, Real Studios was involved in every stage, from the securing of Heritage Lottery funding to the masterplanning of the visitor experience and interior design across the Victorian buildings, which were to be united around a new, contemporary four-storey extension – she is still astounded at the extraordinary range and quality of the Museum’s collection, something which its previously restricted spaces had not allowed them to fully reveal. ‘I had no idea, when we started on the project just how much amazing content they have got,’ she says. 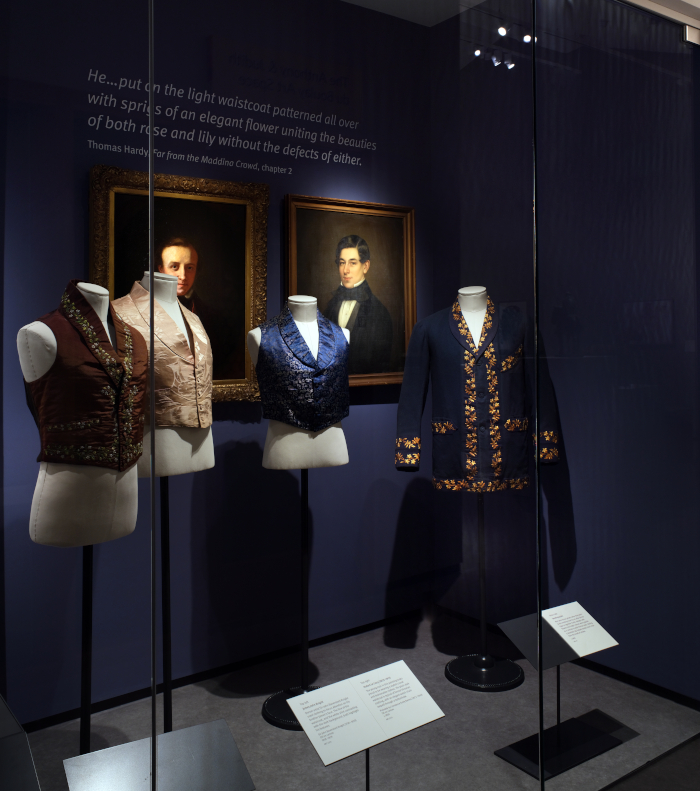 When people think of Dorset, they might think of dinosaurs; its rugged coastline forms most of the Jurassic Coast Natural World Heritage Site, so designated due to its geological and palaeontological significance. And they might think of ancient Britons or Romans; its undulating contours are often shaped by the remains of Neolithic and Roman dwellings and encampments. They might also think of Thomas Hardy, the county’s most famous literary son. And the Museum has outstanding artefacts in all these categories. But Golds was struck also by the richness of its social history collection, including working garments, tools and treasures from the county’s inhabitants over the past 2,000 years. She saw the potential to tell extraordinary stories about the people and how their lives were influenced by their relationship to land and sea,w and how those relationships in turn shaped the landscapes around them.

These relationships are very much apparent in Natural Dorset, the first gallery you encounter, on the ground floor of the new, contemporary exhibition wing at the core of Dorset Museum, as well as in the People gallery on the floor above. Obviously, there are major challenges in bringing the thrill of outdoor vistas into an indoor space. But Real Studios’ insertion of seven A/V monoliths across the Natural Dorset gallery does a pretty good job: the stunning range of land and seascapes is flagged up with specially commissioned films, revealing a different local habitat on each screen. Periodically, one huge vista spans across all seven screens at once. Alongside each display, imagery and artefacts reveal the animal and bird life found in these habitats while another layer of displays set in front of these screens conveys the impact of human activity, including ancient tools used for forest clearances and farming. Set behind the A/Vs are tributes to local palaentologists, archaeologists and geologists, from professional academics to the self-taught enthusiasts – such as Mary Anning – whose Dorset finds helped to fuel our understanding of earth and its evolution. One floor up, in the Peoples’ Dorset gallery, Golds says: ‘We’re starting from the Mesolithic era, with flint tools and going all the way up to modern. Unusually, for a museum, they’ve got really good textiles, and a lot of workwear – a lot of farming smocks and bonnets, the sort of thing which doesn’t normally survive.’ 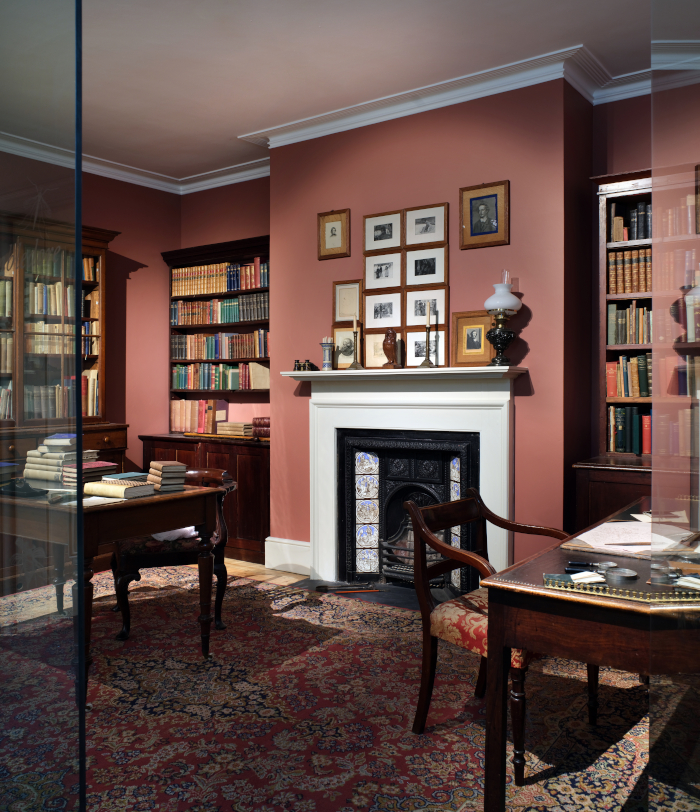 A timeline of human habitation is presented chronologically around the perimeter of the room. For the displays, Real Studios and the curators chose some of the more unusual and curious objects that contrast with contemporary life, in order to provoke conversation about local lifestyles then and now. Says Golds: ‘There is some really good material that represents cottage industries over time, such as button making in Blandford Forum. There is a really strong collection to show trade and industry through the 19th and 20th century.’ Stories of community culture, from rituals to creativity and craftsmanship are beautifully illustrated and accompanied by concise texts and commissioned films. In the centre of the gallery an area dedicated to ‘land, sea and community’ stands out, thanks to glowing, white display furniture, contrasting with the calm blue of the surrounding walls. 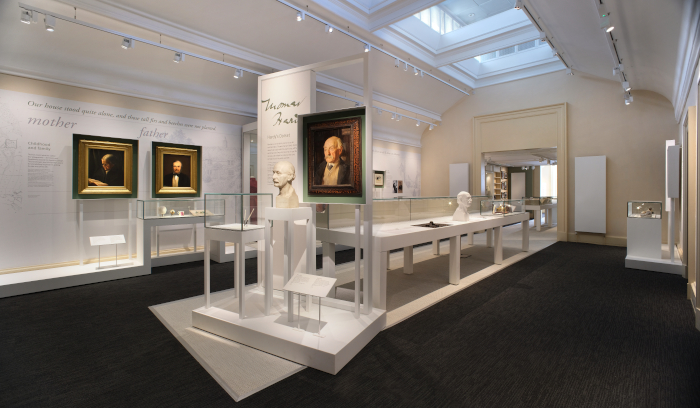 A section of the museum is dedicated to Thomas Hardy, Dorset’s most famous writer

As Dorset’s most famous writer, Hardy is also on this floor, but in a connecting suite of five spaces in the original Museum building. The presentation is crisp and contemporary, examining Hardy’s early years, including his training as an architect and his family life. Wonderful, personal artefacts are included, among them his writing pens, and the musical instruments he and his family would often perform on. An adjacent room reveals a very close replica of his study. In another, timber-panelled ‘story space’ there are sofas and audio points for Hardy’s books, along with books by other Dorset authors or inspired by Dorset’s land and people.

Here, as elsewhere, great thought has gone into how to draw in youngsters and those unfamiliar with the subject. ‘If people don’t know Hardy already,’ Golds says, ‘how do you get people interested in his literature? One section looks at themes represented in his books, and one area looks at Hardy’s Dorset and how that has influenced appreciation of the county. For youngsters, there is a magnetic interactive to create sentences using Hardy phrases.’ Also, one of his sister’s dresses features in the musical instrument area, and several of Hardy’s beautiful watercolours are displayed. 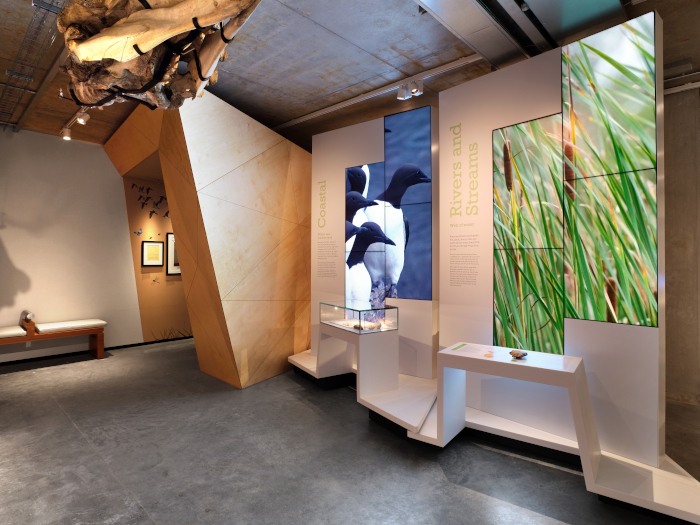 The top floor is dedicated to Dorset Artists. Georgian portrait painters flourished here, clearly, as did the creative communities that were established in the 20th century. An area is dedicated to Elisabeth Frink, who spent her later years living in the county until her death in 1993, thanks to a recent bequest from her family of around a third of her collection to the Museum. There is also an Art Space studio for small group workshops, plus access to the extensive print collection and another room dedicated to the Museum’s exquisite textiles.

‘It was a massive undertaking to unite these four million objects and artefacts that span 250 million years of Dorset history in a way that appeals to everyone from family visitors to enthusiasts and experts,’ says Golds. ‘Fortunately, that’s part of the job that I love: finding a thread through the stories that will draw people in.’ Even though the new four-storey gallery extension more than doubles the exhibition space the Museum previously had, Golds says, ‘we could have filled several times these new spaces, particularly with the social history collections. So we did a lot of work with the client as to how to make it make sense from a storytelling point of view.’ 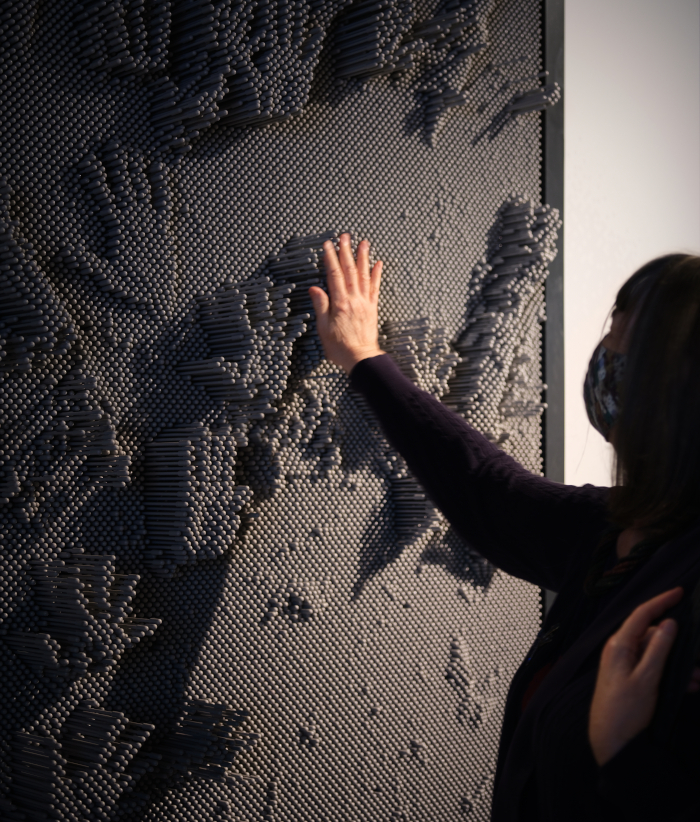 Experiencing the museum, there is a lovely variety to the pacing and choreography of the themes and artefacts, and a richness in texture, colour and aesthetics through careful layering of illustration, film, photography and object displays. But what really adds to it is the coherence and connectivity created by the cross-collection approach – for example, paintings from the art collection, where relevant, have been added into the people or nature galleries, and images and insights into Dorset’s landscape and geology appear in the Hardy section. Says Golds: ‘We have taken it from a story and a people focus throughout, which I think is unusual.’

For youngsters, there are already favourite elements. Says Golds: ‘In the Natural area we have got a model of a Pleiosaur’s mouth that you can crawl through, which is incredibly popular. In Peoples Dorset we’ve got a Pin Press – you can literally put an impression of yourself in the gallery, and that’s in the centre of the space. There is also a railway interactive here. We have really tried to ensure it works for multi-generational visits as well as schools.’

Real Studios and the Museum team have also ensured that the voices of Dorset people are foregrounded, from intensive workshops at each stage of the design with a local access group, in order to ensure that all access requirements are met, to bringing contemporary Dorset voices into the People’s gallery. Says Golds: ‘We consciously made a decision to look at fewer stories in depth and make them more meaningful.’ Faces can obviously be shown for contemporary biographies, but not those from the early period. To make them less anonymous, Golds commissioned a whole set of illustrations showing hands either making or using key objects in that period, ‘to bring the objects to life.’

The theme of uniting people and place across the ages continues through the design scheme Real Studios devised for all the public spaces and circulation areas, knitting the historic buildings together with the handsome contemporary staircase and gallery extension through coherent and complementary approaches, lighting and colours. The entrance is through the original Victorian doors, and immediately on the left is a new welcome and retail area, while a café on the right links through to the characterful Victorian Hall, its herringbone floor newly restored. With walls painted ‘Lulworth Blue’, the new café takes full advantage of its high Victorian ceilings and stained glass elements, while a salon hang of some of the Museum’s archive photographs animates the walls, and fixtures and fittings in black, white and grey complement the Hall’s herringbone floor. A new catering kitchen next to the Hall serves the café and also means that a wide range of fully catered private events can now be booked for either or both Café and Hall, bringing vital additional revenues in to the Museum.

The Museum’s library has been reinstated in the original first floor library room, accessed via the Victorian staircase, and is open to the public for the first time (previously only members of the Dorset Natural History and Archaeological Society could access it). Golds says: ‘The Library is another really nice original space, with high ceilings and bay windows. We’ve tried to make it feel like a space you could stay. It is very welcoming, with bookcases around the walls. And we have also created two C-shaped desk and seating spaces in the centre, for personal study, with multiple pendant lights that hang over them, and another seating area in the bay window.’ The Museum context is referenced with a Frink sculpture in the window, and assorted showcases which will present rotating displays from the Collection.

What with a new ground floor learning centre, as well as space for temporary exhibitions, and a generous archive area in the new basement – clearly visible from the staircase – Dorset Museum can now proudly claim to be a state-of-the-art 21st century museum that more than does justice to its region and its community. 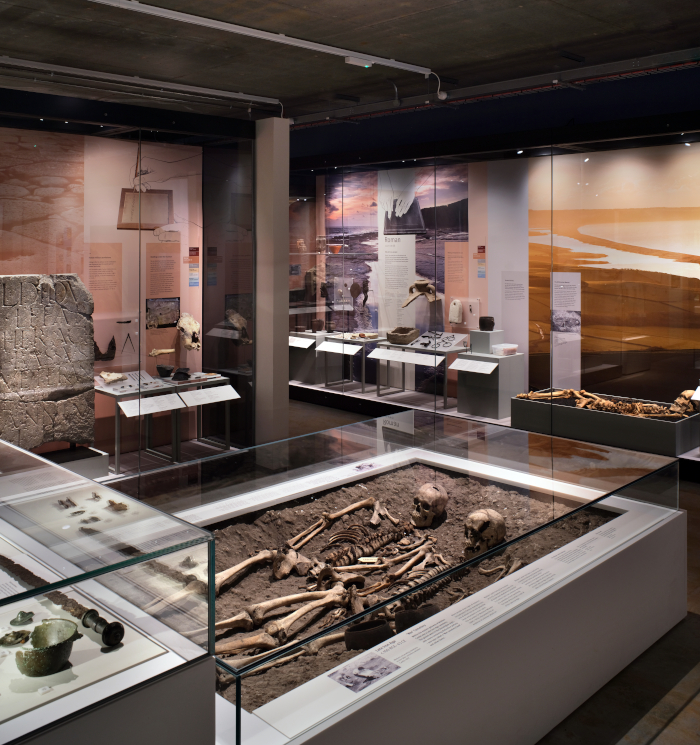 Elizabeth Selby, Dorset Museum Director, says: ‘There’s a lot of good word of mouth about the Museum now. We’ve got such amazing spaces and such an amazing collection, it’s great there is a growing appreciation of this resource being here.’ The cross-collection approach, she feels, has done much to enrich and embed the bigger stories in visitors’ minds. As for numbers, obviously, the pandemic has impacted on visitor figures – projected to be 80,000 – 100,000 annually. But Selby says they are already around the 60,000 mark less than a full year in, which is impressive, under the circumstances. ‘Local people have said: there’s so much to see I can’t do it all in one day. So they’re planning on coming back. Some people spend ages here.’ The new café – run by local restaurateurs TASTE – has been hugely popular with both Museum visitors and casual passers by.

All in all, it looks set to achieve the aims of its then executive director Dr Jon Murden, who said at its opening that the new scheme ‘secures Dorset Museum’s… future and the future of its globally important collections for generations to come.’