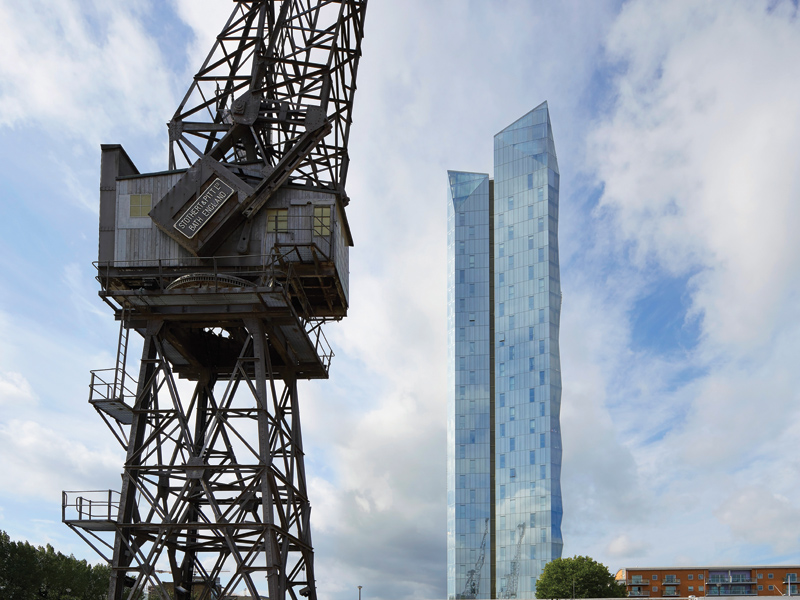 All photographs by Hufton + Crow

Canary Wharf, it is a-changing. The New District — the massive 9.3ha extension to the existing Canary Wharf Estate, with 3,300 new homes including Herzog & de Meuron’s 58-storey residential project One Park Drive — is due to be completed in 2022; the HoK-designed 67-storey Spire London residential tower will be completed in 2020; Make’s 53-storey residential tower, The Madison, should complete in 2019; and the 68-storey South Quay Plaza development — designed by Foster + Partners — is due to complete in 2021. And this is not even an exhaustive list.

Anticipating this rapid-fire development is Dollar Bay, a 31-storey residential project from SimpsonHaugh, completed last August. A sliver of a seemingly silver tower at the eastern edge of the Isle of Dogs, Dollar Bay takes its name from local activities during the Second World War, when American naval ships anchored nearby would pay dock workers a dollar to tow them into their moorings. With its concertina-like rippled western facade, enhanced by a low-iron glass, Dollar Bay reflects both sky and water

Much of the existing high-end residential stock in the Canary Wharf area is decidedly Noughties, with a language of stacked balconies. ‘We wanted a contemporary language for a new residential tower,' SimpsonHaugh partner and architect Christian Male explained, ‘which at the same time related to the office buildings surrounding it.’ The way the practice has achieved this sleek aesthetic, whilst still providing residential balcony space, is by designing what is essentially a glazed shell of ‘winter gardens’ around two core structures, connected by a central circulation spine. The sculptural form of the western facade, showing the louvres of the winter gardens

It is the private winter gardens feature that ends up being the primary draw of the Dollar Bay apartments — the bedrooms are small for such a luxury-standard residential project — along with the expansive views these ‘gardens’ enable through floor-to-ceiling glazing.

Stepping out from an apartment into one of these winter gardens feels like a seamless transition, even though you are officially moving from interior to exterior space. Sheltered despite its exposed view, it feels closer to a conservatory than a balcony, enabling the inclusion of furniture and homeware.

The gardens are protected from the weather and wind — while still allowing natural ventilation — by louvres that are individually adjustable by each unit. While this gives each resident the ability to manage their preferred winter garden microclimate, the downside is that the visual unity of the exterior is broken up by a random pattern of louvres in different positions, giving the building an almost unfinished look. One of the winter gardens, overlooking Canary Wharf and the New District under construction

But the winter gardens aren’t simply about resident leisure space: they also act as a thermal buffer zone, encasing the fully glazed building within it, therefore achieving Code for Sustainable Homes Level 4. Other sustainability features include an energy-efficient dock-water cooling solution, reducing carbon footprint by 23% compared to traditional technologies. It is the first time water from a London dock has been used to cool a residential building.

SimpsonHaugh has used a low-iron glass for the exterior of the tower with an Ipasol Bright White solar coating produced by Interpane; this is the same finish as on The Shard, as well as the practice’s emerging building One Blackfriars (also known as the Boomerang). As fans of The Shard will know, the reflective quality of this material allows the tower to visually almost dissolve into the sky, especially when — as is usually the case in London — it is cloudy and overcast.

This light, shimmering presence suits the city well; much like The Shard, the Dollar Bay tower is able to make a statement without being confrontational. With its location overlooking the Isle of Dogs’ South Dock, and enhanced by its sculptural exterior, Dollar Bay simultaneously reflects the water and the sky. The eastern facade, showing the winter gardens sheltered by louvres, which when open can break up the visual effect

The exterior has an angular, faceted form and Male describes the building as ‘two crystals which pierce the sky’. It’s an aesthetic proving popular in London right now, seen also in contemporary projects such as KPF’s The Scalpel and AHMM’s 240 Blackfriars. The faceted motif repeats throughout the Dollar Bay building, from the design of the entrance lobby through to the door handles of the residential units.

The western facade of SimpsonHaugh’s tower has a rippling, concertina shape ‘like a cascading waterfall’. This structural form pulls in at the base, creating additional space for landscaped public realm. Saying this, although the development has improved the immediate public realm surrounding it — providing a newly accessible, safe link direct from Manchester Road to the South Dock called Dollar Bay Place — the private residents’ garden created does look somewhat depressing locked behind a dark, gated exterior.

The potential public give-back of the project seems limited. Commissioned by a joint venture between developer Mount Anvil and Citystyle (part of One Housing), the project was started in 2008; it was originally envisioned as a taller tower but the financial crash took its toll. This was likely a blessing in disguise, however, as its current height of 109m gives it a more human scale and it doesn’t feel overwhelming or crushingly corporate. The building cuts back at the base, continuing the faceted, crystalline motif

Set on a 0.24ha site, the development provides 125 homes, ten of which are classed as affordable, ranging from studios to three-bed apartments and penthouses. SimpsonHaugh has designed a floorplate that orientates apartments east to west, providing double or triple aspect views for almost all homes.

Dollar Bay is one of a trio of high-profile projects in the capital for SimpsonHaugh in its 30th anniversary year, with Circus West Village at the Battersea Power Station Development now completed and One Blackfriars due to complete this year.