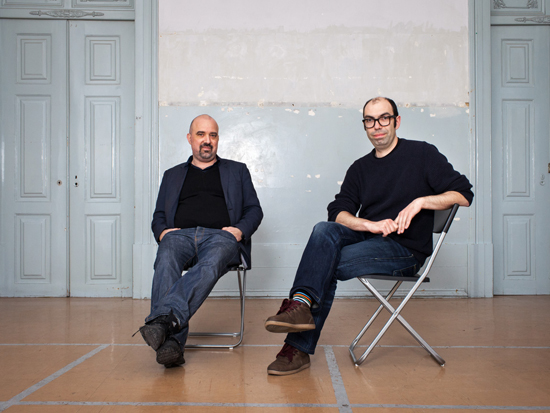 Portuguese architect, writer and curator Diogo Seixa Lopes has passed away at the age of 42

Blueprint magazine is sad to hear that the Portuguese architect, writer and curator Diogo Seixa Lopes has passed away at the age of 42 in Lisbon.

In 2011, Diogo (pictured above, left) and his wife Patricia Barbas, partner in their practice Barbas Lopes Aquitectos, first showed Bluprint their rehabilition of the Teatro Thalia, a neo-classical nineteenth century they were working on with Gonçalo Byrne, one of Portugal's greatest architects. The raw space they created there had a mystical quality, closed to the outside but for a chink in the ceiling: 'It's a fantasy of architects to make something without doors or windows, like a pyramid' he said. The completed project was featured in a Blueprint November 2012.

Diogo was an architectural theoretician as well as a practising architect. His intellect - contemplative, analytical, and often playful - resulted in a seminal book published 2015, about the Italian architect Also Rossi and his San Cantaldo cemetery. Melancholy and Architecture was reviewed in Blueprint.

His last project created controversy: a proposed 17-storey tower at busy Picaos in Lisbon, unashamedly modernist and with an upmarket elegance and discrete textures. 'The city at certain times need an architecture that is the reflection of an era', he said about it.

Diogo was long a friend and collaborator with the Lisbon Architecture Triennale, who appointed him co-curator of this October's fourth edition, along with André Tavares (pictured on the right of Diogo above), who will now continue alone. Blueprint was pleased to publish their 'Listen' in January, in which they talked about their 2016 Triennale theme The Form of Form. We reproduce the article below.

What does architectural form mean? And why is it so significant today? Well, from our perspective, architecture is a visual construct with a full field of responsibilities and hidden values. Even before we think about architecture as a means of design, architecture is a type of knowledge. After all the tensions and frictions that happen during the physical and social transformations of our cities and landscapes, when all the fuss is over, and the different agents who contributed to that change have left the field of play, what is left is a built form. Citizens live among forms, architectural forms have endured from the past, and they will populate the future.

During the past few years alternative architectural practices have become popular: many of them uninterested, primarily, in generating form. Institutions and individuals have instead turned their focus to architects as powerful mediators of social processes, shifting the traditional perspective of architecture away from a profession orientated towards construction. The media contributed to this move, first promoting architecture as a means of image creation even as it celebrated participatory practices. Of course, this is positive as it allows for the enlargement of architecture's scope. But now that more and more attention is bestowed on the social engagement of the architect, we feel it is necessary to resume a discussion about the fundaments of architectural practice.

Because if you look across the landscape of architectural practice in Europe right now, you will find a diverse number of rich responses that, despite their recognition in specific contexts, are slipping under the radar of mainstream recognition. There is, in fact, a generation of architects that have already created a substantial body of work that keeps being understood as the result of independent or exotic happenings in various geographical areas, when in fact they are the result of a wider, international concern. It is not hard to find examples. See for instance MAP Architects, which is nominally based in Copenhagen and whose cross-disciplinary approach is challenging the limits of construction materials. Or the Berlin architect Eike Roswag, who is applying successful technological transfers between Africa and Europe in both directions.

The Portuguese architecture practice Artéria is managing to involve citizens and communities in transformation of entire neighbourhoods. The Greek architect and writer Aristide Antonas keeps manipulating images and apparently disparate narratives to formulate a new architectural alphabet. Practices such as the Brussels-based Office are pushing these experiments further and demonstrating how they can become built realities, which in the end is the ultimate drive for architecture.

There are many more examples. But it is better to consider here what we should do with these ideas. We need to look on this tremendous amount of knowledge production as part of an open discussion. We believe that this discussion needs urgently to be reinstated, and it is time for the majority of architecture schools, journals and magazines to stop avoiding it. There is a need
to identify authors instead of trends and share common interests instead of promoting difference.

The Lisbon Architecture Triennale 2016 is our attempt to address this situation. It will be divided into three main exhibitions entitled The Form of Form, Building Site, and The World in Our Eyes. By passing through these sections one will move from focusing on the architect as author and the visual legacy of architectural history to the battlefield of construction processes, and then keep moving to the usage and analysis of the built environment, a practice that goes back to nurturing design. This tripartite of main work will be joined by satellite exhibitions and associated projects that will compel the visitors to discover the city through different eyes from solely touristic voyeurism. Architects and architecture will engage in a dialogue that unfolds over an urban landscape. The Talk, Talk, Talk conferences and The Form of Form book will suggest possible syntheses from the turmoil of ideas we will host.

Portugal has a strong and recognised architectural tradition and here, as everywhere in Europe, architects are facing challenges where there were once certainties. Change is inevitable, and with inventiveness change can be profitable for all. We are organising this major event in Lisbon to engage in a discussion on the future of European architecture. We see ourselves on the threshold
of a period of burgeoning dynamics within architectural practice and this is not simply a specialised discussion. Citizens are eager to understand what goes on in an architect's head: after all, they will give form to their future.

We never tire of restating that everything is architecture, although we invariably stress the 'everything' instead of the 'architecture'. The Form of Form will go back to the subject, bringing together an array of architects to publicly share their prospects on the future of our built environment. If reading these ideas in Blueprint is intriguing, or inspiring, you will be most welcome in Lisbon to see them taking shape in the physical form of words and meaningful exhibitions.